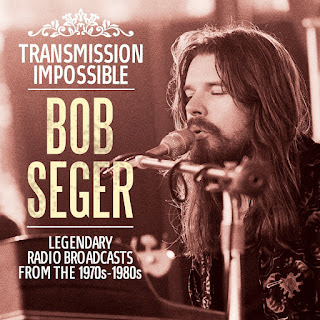 With this “Bootleg Rodeo” column, we’re going to tackle the impressive three-disc Transmission Impossible set which collects a trio of Bob Seger’s “legendary radio broadcasts” from 1974, 1980 and 1983, along with a link to buy it from Amazon.com.

The Reverend has been a Bob Seger fan since the first notes of “Ramblin’ Gamblin’ Man” rang out of the underpowered speaker of the little blue transistor radio hidden beneath my pillow in the bedroom of my Western Pennsylvania home. A few years later, I got to witness Seger and the Silver Bullet Band in person as they took the stage at Nashville’s Municipal Auditorium during the summer of 1976. Opening for Kiss, rockin’ Bob and his gang blew the feeble foursome off the stage and saw themselves kicked off the tour altogether after just a few shows spent upstaging the headliners. The double-shot of Seger’s Live Bullet and Night Moves albums that year would launch Seger to rock ‘n’ roll superstardom.

Flash forward a few more years, and the Reverend was living in Detroit and managing a bus station downtown. Hometown hero Seger announced a six-night run at the city’s famed Cobo Hall in support of his new album, Against The Wind. Tickets were sold on a lottery basis – you mailed in a money order and a self-addressed, stamped envelope and you might get tickets in return – and I was fortunate enough to score tix for my brother and myself for three shows, with rock legend Mitch Ryder pulled out of retirement by Seger personally to open for him.

The impressive three-disc Transmission Impossible set includes a trio of “legendary” Seger radio broadcasts from three distinctly different eras of the singer/songwriter’s career: a 1974 performance at Ebbet’s Field in Denver, Colorado; one of the six Cobo Hall shows from June 1980 that I attended; and a December 1983 appearance at The Hartford Civic Center in Hartford, Connecticut. The set’s deluxe multi-fold packaging is attractive tho’ too short on liner notes, offering up not much more than a list of songs. Still, for the true-blue Seger faithful, these three shows – adding up to over three hours of rockin’ Bob music – are something of a holy grail, and with a street price of under $20, Transmission Impossible is quite enticing…but is it worth the cost?

The 1974 Ebbet’s Field performance offers a fourteen-song set list that would sound somewhat alien to the casual Seger fan, with the newly-minted Silver Bullet Band touring in support of Seger’s (then) new album Seven. Familiar talents like guitarist Drew Abbott (from Detroit band Third Power), bassist Chris Campbell, drummer Charlie Allen Martin, and keyboardist Robyn Robins backed Seger on a scorching set that includes songs like “U.M.C. (Upper Middle Class),” “All Your Love,” and the entirely-appropriate “Get Out of Denver” from Seven as well as fan favorite “Rosalie,” a high-octane cover of Van Morrison’s “I’ve Been Working” (both from Back In ’72), and longtime live staple “Heavy Music.” There are a number of surprises on the 1974 set, though, beginning with the bluesy “Don’t Burn Down The Bridge,” which may or may not have been written by Albert King but featuring Abbott’s high-flying guitar licks backing Seger’s roaring vox.

One of the first appearances of the Ike & Tina Turner grinder “Nutbush City Limits” – which wouldn’t be recorded until 1975’s Beautiful Loser album – brings some funk to the party, while Seger revisits his past with “Song For Rufus,” from 1970’s Mongrel album. One oddball track is a cover of British glam-rocker Alex Harvey’s swinging “Gang Bang” which the Silver Bullet boys go way over the top with. Of course, Seger knocks out his big hit, “Ramblin’ Gamblin’ Man,” with reckless abandon, the arrangement juiced by Robins’ frenetic keyboard-bashing. Sound quality throughout the set is pretty decent considering the vintage of the recording, with a slight hollowness that isn’t a bother when you turn up the volume. This Colorado performance was released in 2012 by Chrome Dreams as Get Out of Denver, so if you have that disc you may not need this one (unless, of course, you want either of the other two mouth-watering shows).

Disc two of Transmission Impossible offers one of the June 1980 performances from Cobo Hall (not ‘arena’ like it says on the back cover) in lovely downtown Detroit, Michigan. Touring in support of Against The Wind, Seger cranks the amps from the beginning of the set with a red-hot take on “Feel Like A Number” from 1978’s Stranger In Town. The band plays like the well-oiled rock ‘n’ roll machine they had become, with Seger’s old pal David Teegarden taking over on drums by this point. Oddly enough, Seger only includes four songs from Against The Wind here, all of ‘em packed in the middle of the set. Although that album’s quality is a point of contention among Seger fans – critic Dave Marsh considered it the worst album of the singer’s career at that point – it was undeniably popular, topping the charts and sitting there at #1 for six weeks as the album would go triple Platinum™ within a year.

Performed alongside the other material that Bob and band crank out, the Against the Wind tracks do pale by comparison. Two tracks from Stranger In Town, for example – “Old Time Rock & Roll” and “Hollywood Nights” – both kick ass, the former evincing a Southern rock groove with a nice Abbott git solo while the latter’s dense instrumental soundtrack and locomotive rhythm provide a perfect backdrop for Seger’s lyrics. A longtime live favorite from Beautiful Loser, “Katmandu” never fails to get the crowd stomping and this performance is no slouch, rolling out of your speakers with all the velocity and subtlety of machine gun fire while the deliberate vocals of “Night Moves” benefit from Abbott’s acoustic guitar strum and Alto Reed’s mournful saxophone. Of the Against The Wind tracks, “Fire Lake” stands the tallest, offering plenty of bluster, but even it is overshadowed by the scorched-earth groove of “The Fire Down Below.” Sound quality for the second disc is a mild improvement on the first, slightly more polished but still crackling with raw energy. Two tracks from this June 15th show were included on the live 1981 album Nine Tonight along with seven performances from four other nights.

Disc three of Transmission Impossible documents a 1983 performance in Hartford, Connecticut, a show of some notoriety among Seger fans, bootleggers, and tape traders. Touring a year after the release of his 1982 album The Distance, the Silver Bullet Band had undergone upheaval with keyboardist Craig Frost and drummer Don Brewer from Grand Funk Railroad coming on board along with guitarist Dawayne Bailey (Chicago) replacing longtime band member Abbott. The Distance was another confusing album, with Seger seemingly searching for a sound, caught up in his own celebrity and unable to regain his old creative footing. Some of the old songs sound great, though – “Betty Lou’s Getting’ Out Tonight” features some hot guitar licks and cool blasts of Alto Reed’s sax while the old chestnut “Ramblin’ Gamblin’ Man” fires on all cylinders.

Much like with Against The Wind, Seger only includes a handful of songs from The Distance on this seventeen-song set list, most notably the honky-tonker “Making Thunderbirds,” a swinging lil’ ditty with plenty o’ spirited Jerry Lee Lewis-styled piano-pounding. The set list as shown on the back cover veers off the tracks only six songs in, and the disc includes only a dozen of the seventeen tracks listed, with much of the middle of the set omitted for no good reason. The sound quality on this third disc is inferior to the first two, with an echo that would lead one to believe that it was an audience recording instead of a radio broadcast.

It’s by no means unlistenable, it just isn’t as enjoyable as the other two discs, and the missing songs are quite aggravating (what the hell, Eat To The Beat?). Still, Transmission Impossible provides a lot of rockin’ tunes for a pittance, and will kick out the jams for any classic rock fan. The Rev’s recommendation: if the missing songs aren’t a deal-breaker, then buy it!