The late, great John Belushi and Dan Aykroyd caught a lot of crap for their 1980 film The Blues Brothers, mostly because a few ignorant critics misunderstood the Saturday Night Live duos’ cinematic treatment of the blues and R&B as satire rather than as the reverent, heartfelt homage that the original BB skit and the resulting movie were meant to be.

Regardless of a few bad reviews, and studio concerns about its appeal to white audiences, The Blues Brothers would score $100+ box office worldwide, spawn an equally-misunderstood but probably unnecessary sequel, yield a couple of hit record albums, and introduce its (mostly white) audience to dynamic performances by great talents like Aretha Franklin, Ray Charles, Cab Calloway, John Lee Hooker, and James Brown. 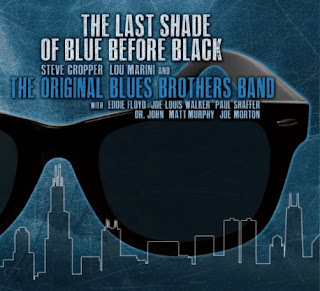 Flash forward a few decades and the two Blues Brothers movies have come to be considered as cult classics, resulting in a long-running radio program hosted by Aykroyd and a full-time touring band comprised of musicians from the movies. On October 6th, 2017 Severn Records will release The Last Shade of Blue Before Black, a new album by the Original Blues Brothers Band. Featuring bona fide rock ‘n’ blues legends like guitarist Steve Cropper and saxophonist “Blue Lou” Marini (both from the original film) as well as notable musical guests like R&B singer Eddie Floyd, guitarists Joe Louis Walker and Matt “Guitar” Murphy, keyboardists Paul Shaffer (an SNL alumni) and Dr. John as well as Blues Brothers 2000 star Joe Morton.

In a press release for the new album, “Blue Lou” Marini says, “Had anyone told me in 1978 that in 2017 I would still be traveling around the world and playing with the Blues Brothers’ Band, I would have said they were out of their minds. But, amazingly here we are with a new CD and still playing all over the world. This album is a true labor of love and I’m so proud of the organic way it came about. We really wanted to honor our history and to include some of our favorite musicians that we’ve worked with and loved over the years. We have the legends, Eddie Floyd and Dr. John, plus our original band leader, Paul Shaffer and the great bluesman Joe Louis Walker.”

The Last Shade of Blue Before Black was produced by Marini, Cropper, and the Original Blues Brothers Band and recorded by Jay Messina at IQII Studios in Hoboken, NJ. The album’s track list is a heady collection of original material and cover songs by such roots ‘n’ blues artists as Delbert McClinton, Jimmy Reed, Willie Dixon, Eddie Floyd, and James Brown. “We wanted to present some new original material and do some tunes that hearkened to our past,” says Marini. “This is a live CD, with everyone recording at once, mostly first or second takes and live vocals and solos. The only overdubs were some baritone sax parts and a few minor fixes.”

Concluding, Marini states “I’ve often said that the OBBB is the world’s greatest part-time job because of you, our fans. We’ve gotten to see the world and enjoy it in your company. We’ve eaten and drank with you, especially the latter, and you have treated us like kings. Enjoy this music and for God’s sake, PLAY IT LOUD!”

Buy the CD from Amazon.com: The Original Blues Brothers Bands’ The Last Shade of Blue Before Black

Matt "Guuitar" Murphy should be included with Steve Cropper and Blue Lou as "...from original movie". He was a key player in some very memorable scenes. I'm looking forward to the new record.