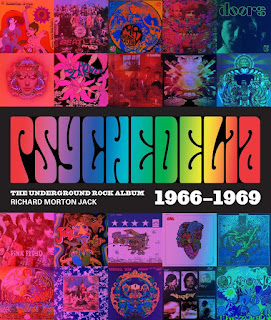 It’s been better than a year since we’ve seen Richard Morton Jack’s excellent music zine Flashback, but I guess that the publisher and editor had a good reason for the lack of a new issue. The British author’s recently-arrived book – the hardback coffee-table tome Psychedelia: 101 Iconic Underground Rock Albums 1966-1970 – is 256 pages of gorgeous album artwork and informative music history that deserves a place on the shelf of every fan of classic rock ‘n’ roll.

Morton Jack is no neophyte to music journalism; a regular contributor to music magazines like Mojo, Q, and Record Collector he also publishes Flashback and is co-founder of the specialist reissue label Sunbeam Records. Morton Jack is also the author of several previous books, including Endless Trip and Galactic Trip, and he edited the new edition of The Tapestry of Delights, a guide to 1960s and ‘70s-era British pop and rock.


While some may argue about Morton Jack’s choices for the book’s “101 iconic underground rock albums,” there’s no doubting his authority on the subject – the writer has probably forgotten more about psychedelic rock than most of us will ever know. Psychedelia is arranged chronologically by the date of each album’s release, and Morton Jack is generous in his definition of the psychedelic-rock era, dating it from 1966 to 1970 (with ’67 being the genre’s peak). A lot of music historians feel that the psychedelic era had petered out by late ’68 in spite of the glaring fact that artists were still exploring the music’s potential as late as 1970; I side with Morton Jack in this argument.

So, the first album featured in Psychedelia is Bob Dylan’s 1966 LP Blonde on Blonde, a courageous choice that Morton Jack deftly defends in his notes. A handful of other pioneering early psych albums from ’66 are included, including LPs by the Yardbirds, the Blues Magoos, and the Deep as well as an odd bodkins outlier, Pat Kilroy’s Light of Day. From here, we’re off to the races, with 1967’s wealth of psychedelia including both well-known releases like the Beatles’ Sgt. Pepper’s Lonely Hearts Club Band, Country Joe & the Fish’s Electric Music for the Mind and Body, and Pink Floyd’s The Piper at the Gates of Dawn as well as relative obscurities like Captain Beefheart’s Safe as Milk and the 13th Floor Elevators’ Easter Everywhere as well as discs from folks like Moby Grape, the Bee Gees (?!), Love, and Jefferson Airplane.

From Golden Dawn to the Pretty Things 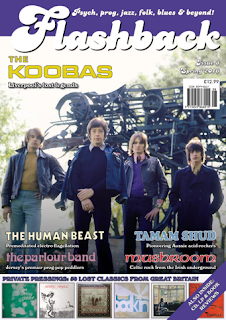 When 1968 rolled around, if we are to believe conventional wisdom, psychedelic rock was already waning, a misconception disabused by Psychedelia. From January’s International Artists label release Power Plant by Golden Dawn and Spirit’s self-titled debut to December’s S.F. Sorrow by the Pretty Things, and with albums in-between by artists as diverse and adventuresome as the Mothers of Invention, the Zombies, the United States of America, Silver Apples, the Grateful Dead and many others, the meat and potatoes of Psychedelia can be dated to 1968. Everything occurring afterwards – self-titled albums by visionary bands like Kak, Gandalf, the Charlatans, Mighty Baby, and Arzachel as well as essential psych-rock LPs like Sam Gopal’s Escalator, Alexander “Skip” Spence’s Oar, and Quicksilver Messenger Service’s Happy Trails – are all gravy, released in 1969 and ’70.

The entry for each album includes a 7” to 8” color reproduction of the album’s original artwork, the book’s hefty 10” by 11.5” size allowing for the brilliance of each album’s cover to be preserved and presented in detail. Morton Jack’s accompanying notes offer insightful historical context for each album, often provided by interviews with the artists, both new and previously-published in the music press. Psychedelia also includes a deeply-researched timeline of psychedelic music as well as special sections on U.S. and U.K. music publications, great American and European psychedelic singles, rock festivals and, lest one forget the original inspiration for the psychedelic revolution, a brief history of LSD.


Richard Morton Jack’s Psychedelia is unassailable as both a history of psychedelic rock or as a guide to the essential albums of the era. These are the records that would set the table for much of what would follow in rock ‘n’ roll, from the guitar pyrotechnics and progressive rock of the ‘70s to 1980s-era garage rock and the psychedelic revival of the ‘90s. More than just another good-looking coffee table book, Psychedelia offers substance and style, providing a lot of info to chew on for the baby-faced new fan and psychedelic veteran alike. Whether you’re a longtime fan of the psychedelic style or you’re looking for an introduction to the genre, you can’t go wrong with Psychedelia, which would be a bargain at twice the price. Grade: A (Sterling, published May 2, 2017)