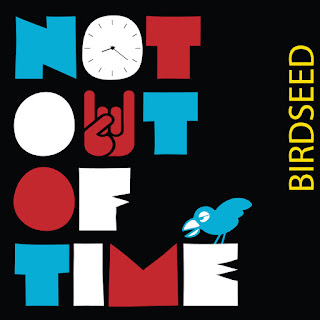 Even for a jaded old rock critic like the Reverend, every now and then the blue-clad U.S. postman delivers a gem whose sparkle and gleam catches one’s eye. One such recording that muscled itself to the top of the slush pile amidst faceless modern rock clones and carbon-copy pop divas was Birdseed’s Not Out of Time. While promotional copies of vinyl records arrive more frequent these days (jeez, there was a time in the early ‘00s where wax was nearly extinct!), the diminutive younger sibling of the LP – the oddball 10” EP – is still a rarity though, to be honest, I have bought in EPs by Jimi Hendrix and Marshall Crenshaw in this 10” vinyl format recently.

Birdseed’s Not Out of Time


Birdseed is an honest-to-Chuck-Berry American rock band formed in 2012 in San Francisco. Comprised of singer Kerry Landreth, guitarists Jamie Goodyear (who also sings) and Mason Morfit, bassist Lane Murchison, keyboardist Brian Hetherington, saxophonist Peter Landreth, and drummer Scott Bell, Birdseed’s Not Out of Time EP collects five of the band’s songs that had previously been released as singles. Although the band’s sound has been described as “Fleetwood Mac meets Wilco,” there’s really a lot more than these convenient labels going on here.

The EP’s title track, for instances, offers Landreth’s throaty, slightly-twangy vocals which remind more of the Textones’ Carla Olsen than of Stevie Nicks. Roaring above country-flavored soundtrack that follows a jangly Byrdsian blueprint, the song’s accompanying harmony vocals, stinging guitars, and rumbling percussion provide an encouraging introduction to the band. “Next Trip Around the Sun” is unexpectedly stunning, Landreth’s voice channeling no little emotional turmoil above a low-slung rhythmic groove, her brother Peter’s mournful sax offering a masterful counterpoint to Landreth’s dark-to-light lyrics.

The newest song on the EP, “I Want You To Know” is a mid-tempo ballad with Landreth’s lovely voice complimented by elegant fretwork and subtle instrumentation. Lyrically a poignant letter from a parent to their child, it’s a well-crafted tearjerker. The inspirational “We Can Do It” was co-written by Landreth and her nine-year-old daughter Bebe, the song’s hopeful message bolstered by strong-though-subdued instrumentation that rightfully places the spotlight on the lyrics. Peter Landreth’s soul-flavored sax and some impressive Steve Cropper-style guitar provide additional texture to the performance. “More Than I Needed the Truth” addresses personal relationships from a mature perspective, Landreth’s twangy vocals partially-buried in a gorgeous, multi-faceted soundtrack with a too-brief guitar solo and melodic harmonies.


This ain’t your kid’s music, Birdseed delivering grown-up rock ‘n’ roll from an adult’s perspective, with lyrics forged in the crucible of life. Birdseed’s members were older than most bands when they got together, and most – if not all of ‘em – are parents, with all the headaches and heartaches parenthood entails. Birdseed’s lyrics are informed by Kerry Landreth’s struggle with incurable breast cancer, but are hopeful rather than dire, while the band’s instrumental talents provide a suitable backdrop for her skilled vocals. Creating music that is too good, and too authentic for major label release, Birdseed’s Not Out of Time EP is one of those rare treasures that will take 20 years or so for rock music’s critical cognoscenti to catch up with. Grade: A (Bird Records, released August 4th, 2017)

Buy the EP from Bandcamp: Birdseed’s Not Out of Time EP

Reverend, I am one of the guitar players in Birdseed and this post just made my day. I love that you found our videos as well. I would love to connect and give you a sneak peak at our latest single which we are still mixing, but on which I would love your input - address for me is gmmorfit@gmail.com