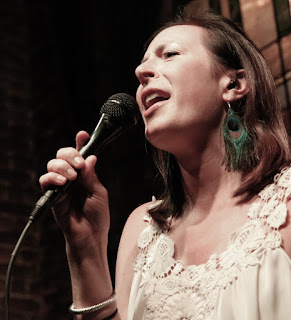 Kerry Landreth is lead singer and songwriter for the San Francisco rock band Birdseed, whose recently-released 10” EP Not Out of Time the Reverend found quite impressive, writing that “Not Out of Time is one of those rare treasures that will take 20 years or so for rock music’s critical cognoscenti to catch up with.” Comprised of singer Landreth, guitarists Jamie Goodyear and Mason Morfit, bassist Lane Murchison, keyboardist Brian Hetherington, saxophonist Peter Landreth, and drummer Scott Bell, Birdseed delivers “grown-up rock ‘n’ roll from an adult’s perspective, with lyrics forged in the crucible of life.”

After my review of Not Out of Time was published, Birdseed guitarist Mason Morfit got in touch. He kindly hooked me up via email with Landreth for the following Q5 interview and she graciously took time out of her schedule to answer a few questions about the best band that you’ve haven’t heard (yet).

Q1. What originally got you interested in singing and music?

I grew up surrounded by music – I lived in London during Andrew Lloyd Weber’s heyday and sang songs from musicals in my living room every night. I sang in an a capella group and a band at Exeter, and then in an a capella group at Stanford. Joining Birdseed was a joyful revisit of the things I loved most. I’d beaten breast cancer in 2010-11 and going through that was as transformative as you’d imagine. Except my version of taking the “cancer lesson” wasn’t to slow down, it was to speed up.

Luckily I fell in with the right group of musicians – we were all at a point in our lives where we’d lived enough to know what was important to us. And to our surprise and delight, we found we write great music about it. My cancer came back in 2015, which created a sense of urgency. Musically, things ignited. We started writing, recording, and playing live with a vengeance.

Q2. Who are your musical and songwriting influences?

Q3. Why compile Birdseed's singles onto vinyl rather than CD, and why a 10" EP?

For the same reason we are writing music about people our age. It’s for the generation who grew up loving vinyl.

Q4. Why record and release singles rather than a full-length album?

We record them as soon as we write them (and inspiration only comes when it comes). We are so excited to share them with our friends that we can't hold anything back for a LP. Most of the fun is from sharing this stuff.

Q5. Has the band been approached by any labels, or would y’all prefer to keep doing your records yourselves?

We signed early to Bird Records because of how cool the Bird school and studio are. That place brought music to all of our kids. Most of them now play music and have been in bands. We are an independent group of people and independent label makes sense for us.

Related content: Birdseed’s Not Out of Time EP review