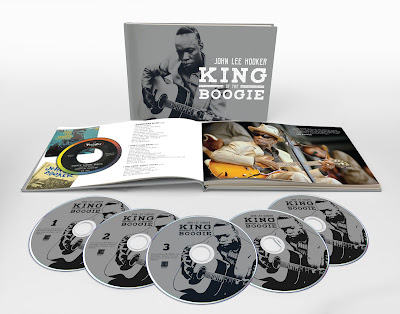 The late John Lee Hooker remains one of my favorite bluesmen, and I’d easily slot him in the top six or seven blues artists of all time in terms of importance and influence on the genre. There are an abundance of Hooker compilation albums available for the curious, including the excellent Acrobat Records set The Modern, Chess & Veejay Singles Collection 1949-62 that we reviewed a few months back. However, it looks like Craft Recordings, a division of Concord Bicycle Music, is going over and above the call of duty with the label’s recently-announced five-disc John Lee Hooker set.

Titled King of the Boogie, the set’s whopping five discs dig deep into the John Lee catalog, past the many pseudonyms he used to record under in order to compile a true career-spanning collection. King of the Boogie offers 100 songs (in celebration of the centennial of Hooker’s birth) that include not only his monster hits, but also rarities, live recordings, and previously-unreleased tracks. The set is housed in a cool 56-page book that includes a wide selection of photos as well as new liner notes by writer and Hooker historian Jas Obrecht as well as the artist’s longtime manager and friend, Mike Kappus.

The collection was curated by producer Mason Williams to provide a narrative of Hooker’s career. “Even at 100 songs, this set is just a snapshot of John Lee Hooker’s incredible and influential career” says Williams in a press release for the collection, “but one that takes you on the long journey he took from his early days in Detroit, to his time in Chicago recording for Vee-Jay Records and up through his later collaborations with Van Morrison, Bonnie Raitt, and Santana, among others.”

Born in 1917 near Clarksdale, Mississippi to a family of sharecroppers, Hooker worked his way to Detroit as a young man with an eye towards a career in music. Hooker enjoyed his first hit single in 1948 with the iconic “Boogie Chillun’,” and over a career that lasted better than 60 years until his death in 2001, Hooker recorded over 100 albums that would earn him four Grammy® Awards and induction into the Rock & Roll Hall of Fame and the Blues Hall of Fame. Along the way, Hooker would influence several generations of musicians, from the Rolling Stones and Eric Clapton to Canned Heat and Carlos Santana as well as modern bluesman like Tommy Castro.

Looking at the track listing for King of the Boogie, the first couple of discs document Hooker’s early years with great songs like “Boogie Chillun’” and “Crawlin’ King Snake” as well as obscurities recorded under alter-egos like “Texas Slim” and “Delta John” in order to collect a session check. Disc three offers up a wealth of classic tracks like “Boom Boom,” “Frisco Blues,” and “One Bourbon, One Scotch, One Beer” while disc four is comprised entirely of live tracks.

The fifth and final disc captures Hooker in the twilight of his career, his vocals and spirit still strong on 1980s and ‘90s-era recordings with friends like Canned Heat, the Groundhogs, Van Morrison, B.B. King, George Thorogood, Bonnie Raitt, and Carlos Santana, among others. King of the Boogie will be released by Craft Recordings on September 29th, 2017.

Buy the box set from Amazon.com: John Lee Hooker’s King of the Boogie
Posted by Rev. Keith A. Gordon at Friday, August 25, 2017