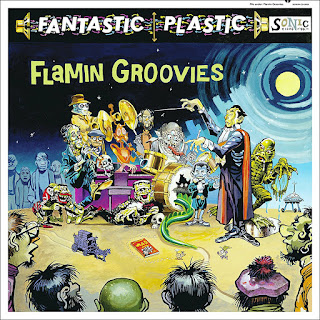 News just doesn’t get better than this…after almost 38 years, rock ‘n’ roll legends the Flamin’ Groovies are returning with a brand new album! Titled Fantastic Plastic, the album will be released on September 22, 2017 on the band’s own Sonic Kicks Records label in association with Severn Records. The release will be the first Groovies’ studio album since 1979’s Jumpin’ In the Night and represents the reunion of original band member Cyril Jordan and longtime guitarist Chris Wilson.

Produced by Cyril Jordan and Joel Jaffe (who also contributes guitar) and largely recorded at Studio D in Sausalito, Fantastic Plastic features ten new original tunes penned by Jordan and Wilson as well as covers of the Beau Brummels’ “Don’t Talk To Strangers” and NRBQ’s “I Want You Bad.”

Formed in 1965 by guitarist Jordan and singer/guitarist Roy Loney, the Flamin’ Groovies quickly found an audience in their hometown of San Francisco. The release of a 10” seven-song EP titled Sneakers earned the band a contract with CBS, which released the Groovies’ subsequent 1969 debut album, Supersnazz. Audiences weren’t ready for the Groovies’ 1950s-inspired, ‘60s-oriented hybrid of power pop, punk, and garage rock and poor sales led to the label dropping the band shortly after the LP’s release.

Undaunted, the Groovies were signed by Kama Sutra Records, which released a pair of bona fide classic rock ‘n’ roll LPs in 1970’s Flamingo and 1971’s Teenage Head. Once again, audiences weren’t keeping up with the band’s evolution in sound. Going on a five-year hiatus that saw the departure of lead vocalist Loney (who later formed his Phantom Movers band), the Flamin’ Groovies roared back with new singer and guitarist Chris Wilson to record what would become the band’s ‘magnum opus’, 1976’s classic Shake Some Action, released by Sire Records.

The label would release two more Groovies’ albums – 1978’s Flamin’ Groovies Now and 1979’s Jumpin’ In the Night – both of which displayed a harder-edged, punkier sound, before dropping the band. Wilson jumped ship in 1980 to join the Barracudas, and Jordan kept the Groovies going until he pulled the plug in 1992. Always slightly ahead of their time, none of the Groovies’ Sire releases sold particularly well, although all have since become considered as important albums that influenced both the evolution of punk rock and power-pop, and the Groovies’ sound can be heard in the music of folks like NRBQ, Matthew Sweet, the dB’s, and the Plimsouls, among many others.

Jordan and Wilson reunited in London in 2013 where Jordan was performing with Groovies co-founder Loney. One thing led to another, and the Groovies’ reformed with Jordan and Wilson and began doing live shows. Fantastic Plastic was the result of sporadic recording sessions held over a three-year period as the band met in San Francisco to rehearsals. “The second time we got together,” recalls Jordan in a press release for the new album, “I said, ‘let’s go to Sausalito, let’s do some recording. If we’re going to cut an album, let’s keep going like we were in the days with Sire, writing original material in the style that we’ve chosen.’ Every time we got together, we’d go in the studio and lay down two or three basic tracks, and then I would start overdubbing, and Chris would come down and we’d do vocals. It’s taken us almost three years to do the album – recording it that way, we had to wait until the next tour, and the guys would come into town and start up again.”

Fortunately, Jordan and Wilson quickly found their songwriting groove “It was 33 years that we hadn’t seen each other – we’re talking three decades,” says Jordan. “But when we got back together and I started showing him the musical ideas I had for [the new song] ‘End of the World,’ he immediately came up with the second verse. It was as if time and space hadn’t affected us. It was the same as it was back in 1979 when we were writing the songs for Jumpin’ In the Night. We went back and locked into that. It’s really amazing.”

Largely recorded with original band bassist George Alexander and latter-day Groovies’ drummer Victor Penalosa, Fantastic Plastic includes assistance from members of the Fabulous Thunderbirds. The instrumental song “I’d Rather Spend My Time With You” was recorded with noted producer/archivist Alec Palao on bass and Tubes/Todd Rundgren drummer Prairie Prince. The band will be on the road for a number of late-August dates on the east coast before spending most of September performing in Europe. The Groovies will return to the states in October for shows in Chicago, Cleveland, Nashville, St. Louis, and elsewhere. In the meantime, we get a cool new Flamin’ Groovies album…and that’s good news, indeed!

Buy the CD from Amazon.com: The Flamin’ Groovies’ Fantastic Plastic