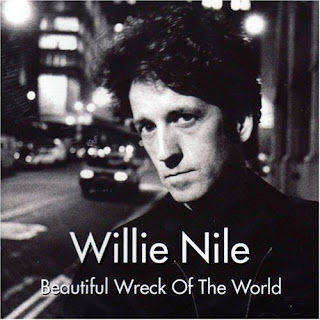 Released in 1999, I recently found this criminally overlooked album in the discount bin at the local used music store. If my memory hasn't failed me quite yet, Willie Nile was hanging around Nashville in late '99 – so it's possible that this copy might have come into my greedy little hands via some unappreciative person who originally received it from Willie himself. Regardless, as a long-time fan I was glad to stumble across it and if you, gentle reader, care a whit about finely-crafted songs and intelligent lyricism, you should be digging up your own copy.

Saddled with the “new Springsteen” albatross early in his career (the '80 version of the “new Dylan” comparison leveled by unimaginative critics in the '70s), Nile never quite recovered from the critical overkill and commercial indifference. He only released three albums for Columbia before being shuttled off to relative obscurity. 'Tis a shame, too, since Beautiful Wreck of the World proves that not only have Nile's artistic chops not diminished any since his 1980 debut, his skills have sharpened and matured during the past two decades.

Nile's greatest asset as a songwriter is his observational ability and the skill with which he shares what he sees. Beautiful Wreck of the World kicks off with the ultra-clever and rocking “You Gotta Be A Buddha (In A Place Like This).” A wickedly tongue-in-cheek rundown of the modern world and tribute to the virtue of patience, the song includes one of my favorite refrains: “You laugh, you cry, you live, you die/you wake up in the morning and don't know why.” The title track is a whimsical and humorous look at a world turned upside down while “Brain Damage” is a slightly offbeat love song that is as witty as it is accurate. “On The Road To Calvary,” dedicated to Jeff Buckley, is filled with beautiful imagery and wordplay, as haunting a tribute to the late songwriter as will be written.

Although Nile's work evokes Dylan and Springsteen – his obvious artistic forebears – he is nevertheless an original voice with a singular lyrical vision. A vastly underrated talent, Nile has been frozen out of the mainstream music biz by trend-following cretins unable to recognize the man's skills or the aging 35-50 year old demographic that would appreciate a fresh and original singer/songwriter. Much like his contemporary Carolyn Mas or the recent efforts of wordsmiths such as Dan Bern or Nashville's Threk Michaels, Willie Nile is a man without a country.

Talented as hell, Nile is nonetheless out of step with the industry in which he's trying to make a living. Then again, as long as he makes records like Beautiful Wreck Of The World, we'll gladly march to the sound of Nile's different drummer. (River House Records, released 1999)


Buy the digital download from Amazon.com (CD out of print): Willie Nile's Beautiful Wreck of the World
Posted by Rev. Keith A. Gordon at Saturday, August 19, 2017