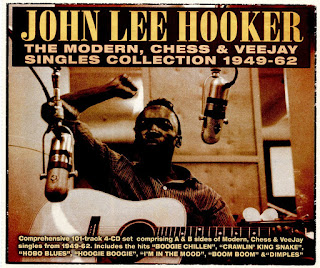 Enigmatic bluesman John Lee Hooker was a one-of-a-kind talent whose career began in the early 1940s and continued through the late ‘90s. While Hooker certainly experienced his share of hard times and misfortune, his late career efforts earned him critical acclaim (including a couple of Grammy® Awards), some measure of commercial success, and the adoration of long-time fans and acolytes like Carlos Santana, Bonnie Raitt, Van Morrison, and Keith Richards, among many others. Born in (or around) Clarksdale, Mississippi in 1912 (maybe), Hooker left home at the age of 14, sojourning out of the Delta and eventually landing in Detroit in 1943 after spending a while in Memphis and Cincinnati. While in Detroit, Hooker earned a place in the city’s competitive and often cutthroat blues scene, earning a reputation as an electrifying performer.

Hooker eventually came to the attention of producer Bernard Besman, who took the bluesman into the studio to record 18 sides, many of which were licensed by Besman to the Bihari Brothers for their L.A. based Modern Records label. Hooker’s first hit single came from those early sessions, the classic “Boogie Chillun,” released by Modern in 1949, peaking at #6 on the Billboard magazine R&B chart. From this point on, Hooker’s discography becomes a little murky; although he would sign contracts with a number of labels through the years, he would also record for any fly-by-night outfit that offered him a handful of dollars up front (royalties be damned!). Thus there are many, many Hooker recordings released under such often thinly-veiled guises as John Lee Booker, Johnny Lee, Texas Slim, and Delta John, among other nom de plumes.


Acrobat’s whopping four-disc set The Modern, Chess & Veejay Singles Collection 1949-62 attempts to put Hooker’s early recordings into proper perspective. Reminding us that the music biz in the mid-20th century ran at 45rpm, the set collects 101 of Hooker’s songs that were released as singles (A-and-B-sides) by the Modern, Chess, and Vee-Jay Records labels during the first 10-12 years of the bluesman’s fledgling career. These songs are the foundation upon which Hooker’s immense legacy is built, and they stand as among some of the headiest blues ever recorded. Acrobat places the songs in chronological order, with as detailed session notes as are possible better than half-a-century after the actual events, the detailed CD booklet providing a convenient timeline for this first stage of Hooker’s career.

Of Hooker’s early sides, a handful stand out and are familiar even the casual blues fans – songs like the aforementioned “Boogie Chillun,” “Crawlin’ King Snake,” “I’m In The Mood,” and “Dimples” extending the bluesman’s influence as far from the Motor City as the U.K. and Europe. His droning, boogie-blues style would inspire young white musicians such as Canned Heat (with whom Hooker would later record an album) and George Thorogood to pick up the boogie-blues mantle. There are a lot of fine early recordings here that offer Hooker’s talents in a different light, however, solo works like the acoustic-based 1949 track “Hobo Blues” (the #5 charting B-side to the #9 charting single “Hoogie Boogie”) evincing an undeniable Delta blues influence.


Hooker’s energetic “John Lee’s House Rent Boogie” (1950) crosses boogie with a talking blues narrative to tell a woeful tale of misfortune that offers up some of the artist’s most stunning and innovative fretwork (the song later raucously covered by Thorogood on his 1977 debut album). Hooker’s unique perspective on rhythm and tempo made it difficult for other musicians to accompany him, but in 1951 he began recording with guitarist Eddie Kirkland, which added another dimension to his performances as one can hear with the classic “I’m In The Mood.” Hooker’s vocals on the song are otherworldly, the juxtaposed guitars providing an unusual and engaging rhythm to the track. “Ride ‘Til I Die” is a red-hot slab o’ refined, jazzy boogie-blues recorded with a full band including Boogie Woogie Red pounding the 88s, drummer Jimmy Turner slappin’ the skins, and Johnny Hooks blastin’ away on the sax.

Although Hooker would frequently ‘appropriate’ traditional blues songs as his own (and his various producers would insert themselves as co-writers so as to grab a share of the publishing), he would also perform the occasional cover song. Hooker’s reading of the Big Bill Broonzy gem “Key To The Highway,” with Kirkland on second guitar, is rowdier than versions cranked out by rockers like Eric Clapton, delivered here with more of a Holy Spirit-inspired, tent revival gospel fervor. The timeless “Dimples,” which was Hooker’s first U.K. chart hit, is built on George Washington’s infectious walking bass line and Eddie Taylor’s rhythm guitar atop which dance Hooker’s jaunty vocals.


Re-recorded a decade after they originally hit the charts, “Boogie Chillun” and “Crawling Kingsnake” are afforded a band treatment the second time around, Eddie Taylor’s guitar and Earl Phillips’ drums providing a foundation on the former song upon which Hooker embellishes with strong vocals and his jagged guitar licks while their minimal accompaniment on the latter song, along with Hooker’s deep, breathless vocals, provide for an elemental performance. The rockin’, raging “Boom Boom,” released by the Chicago-based, African-American owned Vee-Jay Records label in 1962, would prove to be Hooker’s most wide-reaching hit, peaking at #16 R&B and #60 on the pop charts while also reaching across the ocean to hit #16 on the U.K. charts three decades later, in 1992, after being used in a British TV advertisement.

Recorded with a full studio band, including horns, guitarist Larry Veeder, bass legend James Jamerson, and drummer Benny Benjamin, the song’s striking, up-tempo boogie rhythms, Detroit pianist Joe Hunter’s tinkling keys, and Hooker’s growling, lusty vocals inspired Eric Burdon and the Animals to record their take on the song in 1964, hitting high on the charts and prompting a wealth of versions to follow by folks like Bruce Springsteen, Eric Clapton, the Shadows of Knight, and Dr. Feelgood, among others. Hooker himself would revisit the song several times during his lengthy career, re-recording it under the titles “Boom Boom Boom” (1968) and “Bang Bang Bang Bang” (1973), and reverting back to the original title for his 1992 album of the same name. Hooker’s most enduring and, perhaps, best-known song, he can be seen playing it in the 1980 film The Blues Brothers as a Chicago street musician.


Make no mistake – there are a helluva lot of John Lee Hooker compilations to spend your hard-earned coin on, many comprised of much of the same material found on The Modern, Chess & Veejay Singles Collection 1949-62. This budget-priced, compact four-disc set offers a lot of bang for your buck, however, compiling over 100 of the Hook’s best sides and clearly tracing the evolution of his early sound, from lonesome Delta troubadour to charismatic R&B bandleader. These performances by the Rock & Roll and Blues Hall of Fame inductee have inspired a couple generations of blues and blues-rock musos on both sides of the pond.

If you’re only familiar with Hooker’s late-career masterworks such as The Healer or Mr. Lucky and you’re interested in the blues giant’s roots, this is a fine collection to introduce you to the charms of one of the greatest bluesmen that ever walked out of the Delta and into legend. I’ve docked it a full grade here – not for the powerful music, but rather for the shabby care with which the folks at Acrobat approached the overall mastering of the set. Surely there were better sources for these great performances (especially the earliest ones), which far too often sound like they were taped from somebody’s record collection. No matter, because the performances here overshadow the sonic inadequacies. Grade: B (Acrobat Music, released October 7, 2016)