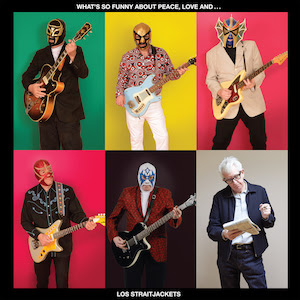 Those Mexican wrestler-masked instrumental madmen are back at it again! Following three tours that saw the band opening for British rock legend Nick Lowe, the members of Los Straitjackets wondered “what would Nick Lowe’s songs sound like as instrumentals?” On May 19th, 2017 we’ll all get to hear the answer to that profound question when Yep Roc Records releases Los Straitjackets’ What’s So Funny About Peace, Love and Los Straitjackets.

A thirteen-track collection that re-imagines some of Lowe’s most iconic songs, What’s So Funny About Peace, Love and Los Straitjackets was produced by Neil Brockbank, Lowe’s longtime producer and musical collaborator, and includes Lowe band member Geraint Watkins on keyboards as well as a cameo by Lowe himself, singing on an undisclosed track. The album also represents the recording debut of Royston Lowe on percussion.

“Recording these songs reminded me what a great melodist Nick is,” observes guitarist and co-found Eddie Angel in a press release for the new album. “Everybody knows that he writes great lyrics, but he doesn’t always get credit for his amazing melodies. The fact that the songs stand up as instrumentals is proof of that. And I think that we managed to bring something new to the songs, which is what you hope to do when you’re covering other people’s material.”

Comprised of guitarists Danny Amis, Eddie Angel, and Greg Townson as well as bassist Pete Curry and drummer Chris Sprague, the hard touring Los Straitjackets have been tearing up the highways and thruways for better than two decades now, and they’ll be hitting the road in June in support of What’s So Funny About Peace, Love and Los Straitjackets, performing with fellow traveler Marshall Crenshaw.

Each show will feature an instrumental set as well as vocal collaborations. The album’s first single, “(What’s So Funny ‘Bout) Peace, Love & Understanding” has been released and you can check it out below before making plans to catch one of these electrifying Los Straitjacket shows when the band hits your town!