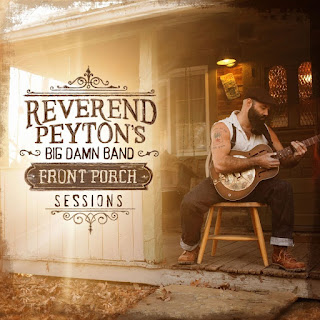 Reverend Peyton of “Big Damn Band” fame has carved out his own little corner of the blues world, straddling the fine line between traditional country blues and contemporary Americana (i.e. an inspired hybrid of country twang, muddy blues, and folk music) with original songs cranked out in a high-energy, octane-fueled fervor. The Big Damn Band’s sound is as minimalist as one can achieve in a recording studio, just the Reverend’s finger-picked guitar licks and low growl vocals, wife Breezy Peyton’s raucous percussion (washboard, typically, but also handclaps and tambourine), and the occasional drummer, this time around it’s Max Senteney with his suitcase drum. They can make a lot of noise for three people, but it’s a joyful noise.


The entire Big Damn Band ensemble is as portable – and powerful – as the blues can be, like Charley Patton picking up his guitar and hitchhiking down Highway 61 to the next town over. The Big Damn Band has toured better than 200 nights a year since the 2004 independent release of The Pork n’ Beans Collection album, opening for such like-minded fellow travelers as Jimbo Mathus and the Dirty Dozen Brass Band as well as for punk and metal outfits like Flogging Molly and Clutch; they’ve also performed on the Van’s Warped Tour. So while the band’s overall appeal is to an audience that skews toward the youthful end of the rock ‘n’ blues experience, there’s a lot to like for we tired, middle-aged blues fans as well.

Front Porch Sessions is the latest from Reverend Peyton’s Big Damn Band, and the follow-up to their critically-acclaimed 2015 set So Delicious. This time around the trio has hooked up with Americana marketing giant Thirty Tigers to release Front Porch Sessions on their own indie Family Owned Records imprint. Musically, Reverend Peyton never strays far from his Delta-haunted old-school blues sound – no sense in re-arranging the deck chairs on the Titanic, you know – and nowhere is this more evident than on the passionate, claustrophobic cover of the great Furry Lewis’s “When My Baby Left Me.” Peyton’s guitar lines shimmer and quiver like the ghost of Son House, his anguished vocals propelled into an otherworldly emotional realm by the song’s rudimentary percussion.

Peyton’s original “One Bad Shoe” is an engaging slice o’ pure country blues; the song’s rambling bass line is interwoven with twangy guitar and the singer’s woeful, broke-ass tale of poverty is as relevant today as it was in the terrible 1920s. Less dour, the upbeat “It’s All Night Long” merges the fever of a tent revival with the beer-drenched energy of the juke-joint, the song a rowdy, mostly-instrumental romp punctuated by whoops and hollers above Peyton’s mesmerizing fretwork. “One More Thing” is an equally powerful take on modern life, Peyton’s lyrics perfectly capturing the reality of life on the economic edge while his guitar gently moans. There are only three cover songs on Front Porch Sessions, the last of which – Blind Willie Johnson’s “Let Your Light Shine” – the best of all, the song provided a Southern gospel feel with Peyton’s spiritually-inspired vocals, stinging guitar licks, and plenty of foot-stompin’ percussion.


Modern blues fans pay a lot of lip service to traditional blues, but most of ‘em were weaned on Eric Clapton and Stevie Ray Vaughan records. It’s a sure bet that many seldom pull out the crusty old Charley Patton or Son House records and play them…1920s-vintage recordings are difficult to listen to, they sound downright alien with their primitive recording techniques, and it takes a lot of historical context to appreciate them.

What Reverend Peyton and his Big Damn Band have done is take that hallowed antique blues sound and made it palatable for young, modern audiences. As witnessed by Front Porch Sessions, Peyton has done an admirable job of absorbing his influences and creating something vibrant, original, and contemporary that pays reverence to his blues forebears and sounds like it should be lighting up a juke-joint stage. Front Porch Sessions is another fine effort from a skilled practitioner of vintage blues. Grade: B+ (Family Own Records/Thirty Tigers, released March 10, 2017)