We’re immensely saddened to report on the death of blues legend James Cotton, who passed away on March 16th, 2017 of pneumonia at St. David’s Medical Center in Austin, Texas. Cotton was 81 years old. The powerful sound of Cotton’s harmonica helped define the evolution of the blues during the 1970s onward, and he was a constant presence on the stage, touring worldwide for better than 60 years.

Known around the globe as “Superharp,” Cotton recorded nearly 30 solo albums, earning the talented singer and harp player six Living Blues magazine music awards, ten Blues Music Awards from The Blues Foundation, and a Grammy® Award for his 1996 album Deep In The Blues. Widely considered one of – if not the greatest – harmonica players in the blues, Cotton’s innovative and fluid style inspired a generation of bluesmen and women to follow. Cotton was inducted into the Blues Hall of Fame in 2006, his status ranking him alongside fellow harmonica greats like Little Walter, Junior Wells, and Sonny Boy Williamson.

Born on a cotton plantation in Tunica, Mississippi in July 1935, Cotton was working as a musician by age nine, learning to play the harmonica from Sonny Boy Williamson II (Rice Miller). Cotton subsequently toured with Williamson and Howlin’ Wolf before hooking up with Chicago blues legend Muddy Waters at the tender age of 20. Cotton would spend the next 12 years touring and recording with Waters before launching his solo career in earnest during the mid-1960s. He’d return to perform with his old boss on Waters’ classic 1970s-era albums like Hard Again and I’m Ready, which were produced by Johnny Winter. 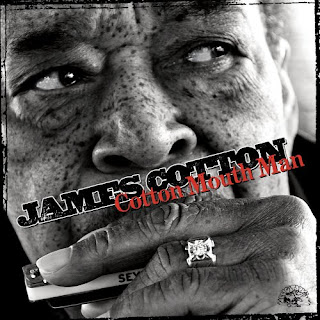 Cotton’s stellar work with Waters aside, he also enjoyed a long career as a solo artist, releasing The James Cotton Blues Band album in 1967 on Vanguard Records. Cotton recorded worthwhile albums for a handful of labels through the 1960s and ‘70s, including Blind Pig Records, Verve, and Buddah Records. It was Cotton’s work for Alligator Records that is best-remembered, however, the harpslinger signing with the esteemed Chicago blues label in 1984, releasing two great albums, including a bona fide blues classic in High Compression. In 1990, Cotton teamed up with fellow harp players Junior Wells, Carey Bell, and Billy Branch for the critically-acclaimed Alligator release Harp Attack!

After leaving Alligator, Cotton went on to record a series of strong albums for labels like Verve, Telarc, and Tomato Records, including the aforementioned Deep In The Blues. Cotton returned to Alligator in 2010, enjoying a late-career revival with Grammy®-nominated albums like that year’s Giant and 2013’s Cotton Mouth Man. Aside from the many blues artists that Cotton lent his talents to throughout his lengthy and successful career – fellow legends like B.B. King, Freddie King, and Taj Mahal – the harpist was a favorite of rock ‘n’ rollers as well, and Cotton toured and recorded with artists like Janis Joplin, Santana, the Grateful Dead, and Johnny Winter, among many others. A legendary talent, the passing of James Cotton leaves a big void in the world of the blues.