Audio Fidelity reissues Grand Funk’s All the Girls in the World Beware!!! 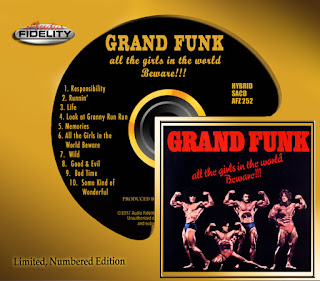 After 1973’s We’re An American Band album peaked at #2 on the Billboard chart on its way to eventual Platinum™ Record sales status, the band formerly known as Grand Funk Railroad wasted no time in getting back in the studio to record a follow-up. The following year’s Shinin’ On ‘only’ hit the Gold™ Record sales level (still, no mean feat in the mid-70s), but the band’s profile and touring income had never been better. By the end of 1974, the band had released their third full-length album in roughly a year and a half in All the Girls in the World Beware!!!

Recorded at singer/guitarist Mark Farner’s studio, The Swamp, located on his farm in Parshallville, Michigan All the Girls in the World Beware!!! was produced by Jimmy Ienner (best known for his work with Three Dog Night and the Raspberries) and represented the band’s ninth album. The album found Grand Funk venturing further out on the thin ice of mainstream pop/rock sounds but still offered some cheap rock ‘n’ roll thrills and soulful R&B; with eight of the album’s tracks written by the band, it’s definitely their most melodic effort. The striking cover artwork – created by taking photos of the band member’s faces and putting them on the bodies of then-famous body builders Arnold Schwarzenegger and Franco Columbo – is reprised on the interior by a Neal Adams illustration of the body builders surrounded by a bevy of young female fans. 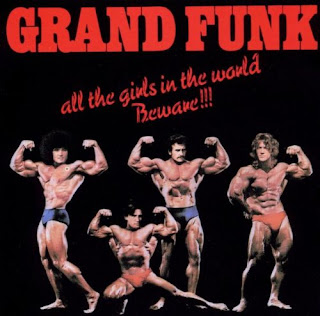 Surprisingly, Capitol Records chose to pass on the band’s original songs to release a cover of the Soul Brothers Six’s “Some Kind of Wonderful” as the album’s first single. The move paid off, the song hitting #3 on the chart and propelling the album to #10 while scoring Gold™ Record sales; although less well known, Farner’s song “Bad Time” peaked at #4 when released as a single in June.

On March 10, 2017 All the Girls in the World Beware!!! will be reissued by Marshall Blonstein’s Audio Fidelity label as a limited edition hybrid SACD. The enhanced Super Audio CD format makes Ienner’s glossy production really pop out of the speakers. The album was the last under the band’s ‘Grand Funk’ moniker (they’d discarded the original “Railroad” with 1972’s Phoenix album and picked it back up with 1976’s Born To Die).

In a press release for the new, upgraded CD release the band’s Don Brewer says the album “was a bit of an experiment for Grand Funk. Disco had raised its ugly head in 1974, and if you wanted radio airplay you needed to go in that direction. Grand Funk, not being a ‘Disco Act,’ decided to do R&B which was really what GFR was all about…R&B pumped up on steroids.” Check out the album’s full track list below.

Previously on That Devil Music:
Grand Funk’s Shinin’ On gets Audio Fidelity upgrade

Buy the CD from Amazon.com: Grand Funk’s All the Girls in the World Beware!!!
Posted by Rev. Keith A. Gordon at Friday, March 03, 2017