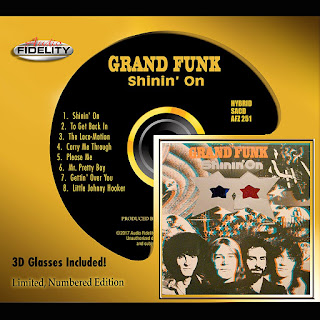 The first half of the ’70s was very good for classic rockers Grand Funk Railroad. From the release of the band’s 1969 debut LP On Time, Grand Funk (as they’d later become known) enjoyed a string of Top Ten Gold™ and Platinum™ selling albums that peaked with what many would consider the pinnacle of their creative and commercial success, 1973’s We’re An American Band. Working with producer and musician Todd Rundgren, the band scored a chart topping hit with the title track, the album peaking at #2 on the charts and quickly selling better than a million copies.

In the wake of the success of We’re An American Band, Grand Funk again enlisted Rundgren to fill the producer’s chair as the band recorded Shinin’ On, their eighth studio album. Mixing Rundgren’s melodic pop prowess with their traditional lumbering rock ‘n’ roll sound, Shinin’ On is often considered by critics as an inferior work – of course, many critics had dismissed Grand Funk altogether up ‘til We’re An American Band rocked their world. Shinin’ On was released in early 1974 and although it would end up selling half as many flapjacks as its predecessor, the album would still peak at #5 on the charts and score a number one single with the band’s cover of the Goffin/King classic “The Loco-Motion.”

On January 27, 2017 this oft-overlooked underdog of the Grand Funk catalog will be reissued by Marshall Blonstein’s Audio Fidelity label as a limited edition hybrid SACD. The enhanced Super Audio CD sound brings the best of the band to forefront of each song. The original vinyl album was packaged in a trippy psych-drenched 3-D sleeve with a pair of 3-D glasses embedded in the album front cover. The Audio Fidelity reissue reproduces the original 3-D sleeve and also includes a pair of 3-D glasses so that the listener can enjoy the songs and album artwork as originally intended.

Buy the CD from Amazon.com: Grand Funk's Shinin' On
Posted by Rev. Keith A. Gordon at Friday, January 06, 2017