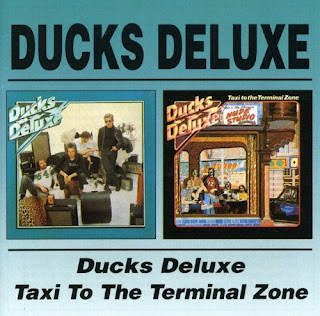 Back in the day, some thirty long and gruesome years ago, my high school buddy Thom King published what you’d call today an “alt-weekly” newspaper. Only we tended to publish monthly instead of weekly, and some months were longer than others, if you catch my meaning. Times were tough back then in Nashville for bohemian types, especially those with an axe to grind and a paper to publish.

Ad dollars were scarce, advertisers didn’t even know what the hell an “alternative newspaper” was, and we published the rag out of a funky pre-Civil War warehouse in pre-urban renewal downtown Nashville. Drunken derelicts, gun battles, stolen mail trucks, and rabid bats were all part of our daily routine...


One of the many perks of publishing Take One Magazine, apart from the “anything can happen at any time” Dodge City vibe on Second Avenue, was the free music. Since fledgling critics such as Thom, Sam Borgerson, and yours truly were cranking out a couple-dozen album reviews each issue, the labels graced us with all sorts of promo discs. There were lots of favorites that would be spun daily on the office turntable, from NRBQ to the Fabulous Poodles, but one of the best and most frequently played was Don’t Mind Rockin’ Tonite by Brit rockers Ducks Deluxe.

Sandwiched somewhere between Glam and the first generation of prog-rockers, and pre-dating the “revolution of ‘77” and punk rock, Ducks Deluxe was lost among the ranks of those bands deigned “pub rock” by the British music press. Alongside colleagues like Ace, Dr. Feelgood, and Bees Make Honey, Ducks Deluxe cranked out timeless music in the vein of Chuck Berry and the Rolling Stones. As described by Ducks’ guitarist Martin Belmont, “all these bands played music that was good for drinking and dancing, and had its r’n’b/soul/country/blues/and rock’n’roll roots highly visible.” Pub rock was better experienced live, in the club, rather than on album and the genre died out quickly in the wake of punk, leaving nothing but a fond memory for a lot of music lovers.

Tragically, Don’t Mind Rockin’ Tonite was released by RCA Records in 1978, three years after the band’s demise. The label had pretty much fumbled its promotion of Ducks Deluxe’s first album stateside, and only released Don’t Mind Rockin’ Tonite, a compilation of songs and B-sides from the band’s two original albums, in response to the UK notoriety of Ducks Sean Tyla (Tyla Gang), Nick Garvey (The Motors), and Martin Belmont (The Rumour). Thom and I played the hell out of the album at the time, though, not knowing or caring about its pedigree. The music of Ducks Deluxe (and most of their pub rock brethren) remains criminally neglected stateside. Luckily, British revival/reissue label BGO Records (Beat Goes On) placed both of the band’s two albums on a two-disc set a couple of years back, a mighty twofer that puts Ducks Deluxe and Taxi To The Terminal Zone in the proper light. 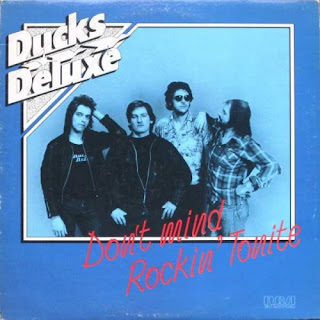 Disc one, the band’s self-titled 1973 debut, kicks off with “Coast To Coast,” the band’s first single, a shambling trainwreck of a song, a sort of “we’re here to rock” introduction to the band that best illustrates Sean Tyla’s throaty vocals, Martin Belmont’s Duane Eddy-influenced guitar skills, and the band’s roots-rock vibe. Featuring Nick Garvey’s somber baritone vocals, “Nervous Breakdown” punches the clock, rockabilly style, sounding like a cross between Eddie Cochran’s “Summertime Blues” and Jason & the Scorchers’ manic country blues. The band slows down to a simmering funky groove for “Daddy Put The Bomp,” a Sean Tyla composition that somehow captures all of the swaggering soul and swamp-rock flavor of Allen Toussaint’s New Orleans in spite of the fact that Tyla had yet to ever visit the U.S. at the time he wrote the song.

My personal fave track on Ducks Deluxe is “Please Please Please,” a Beatlesque pop masterpiece as channeled through the Bluecap ghost of Gene Vincent’s guitar. Garvey’s strangled vocals are perfect, a combination of denial and vulnerability, the fractured melody as catchy as anything you’ll ever hear. I played this tune on the radio once as a guest DJ, on New Year’s Eve 1978/79, and it blew the music programmer’s mind; he rang up the station’s engineer and wanted him to pull the plug on me. Shows the sorry fucker’s ignorance – this is an incredible tune, with Belmont’s guitar ringing crystal clear, great harmony vocals, a simple arrangement and a timeless theme of romance and betrayal.

From this point, Ducks Deluxe runs off the tracks, a musical freight-train rocking from side to side at speeds too dangerous for the band to survive with any certainty. “Fireball” is a Velvet Underground-inspired rocker with Lou Reed vocals and “Sweet Jane” riffing backed by Tim Roper’s big beats and solid rhythms. “Don’t Mind Rockin’ Tonite” is a 100mph cross-country flight through Chuck Berry country with Southern rock flavor and circular riffage as big as all of Texas. Tyla’s western fantasy comes to life with “West Texas Trucking Board,” a big sky ballad with Gram Parsons’ zip code written all over it. Tyla’s Dylanesque vox and the band’s tasty “Big Pink” arrangement belie their UK roots; this is pure Americana roots-rock easily a decade (a generation in rock ‘n’ roll) before bounders like the Long Ryders, Green On Red, and the True Believers would discover Grievous Angel.


Ducks Deluxe closes with another rocker, Bobby Womack’s Southern rock classic “It’s All Over Now,” delivered with Stonesish aplomb, taut guitars, and joyful vocals. When the dust had cleared, the band’s debut album was met with some sort of critical acclaim but faced commercial indifference – the fate of virtually all of the “pub rock” bands of the era. Undeterred, the Ducks added full-time keyboardist Andy McMasters to the mix and ventured into the studio after gigging around Europe to record Taxi To The Terminal Zone.

Produced by Dave Edmunds, Taxi To The Terminal Zone (1975) carries on much in the same vein as its predecessor, that is an inspired mix of blues-flavored boogie, rockabilly filtered through a UK pop culture filter, and shambling three-chord Chuck Berry-styled rave-ups that would serve notice on a generation of punk rockers a few years later. The album’s lead off, “Cherry Pie,” is a tart delight, an early-Stones-styled rocker with wiry guitar and an unrelenting beat. “Rainy Night In Kilburn” is a lovely, piano-led ballad with twin keyboards and Martin Belmont’s quiet, elegant vocals. Belmont’s subtle guitar style shines through on “I’m Crying,” Nick Garvey’s soulful vocals caressing the lyrics, staggering emotion flowing around Belmont’s exceptional leads.

Written by new Duck, pianist Andy McMasters, “Love’s Melody” is an infectious pop confection with an irresistible melody, a big fat ‘60s-styled hook of a chorus and Ventures-inspired riffing by Belmont. Garvey had been a roadie for U.S. rockers the Flaming Groovies a few years previous and the Ducks give that band’s “Teenage Head” a proper work-out, with swirling, sparkling guitars, tough rhythms and muted, scary-as-hell vocals. “Paris 9” is a rollicking raver that evokes Mott The Hoople, with McMasters’ Jerry-Lee-Lewis-on-the-highway-to-hell keyboard riffing, strong harmonies and a big beat.


Sadly, Taxi To The Terminal Zone – named after a line in a Chuck Berry song – went nowhere, and it was left up to the Clash, and the Sex Pistols a couple of years later to turn British rock on its pointy little head. Ducks Deluxe broke up shortly after the album’s release, the members going on to their individual destinies.

I always viewed Ducks Deluxe in much the same vein as underappreciated U.S. bands like the Flamin’ Groovies and the Dictators that never received their due. They live on in legend, however, leaving behind two über-cool albums for those of us that don’t mind rockin’ tonite, or any other night... (BGO Records, released December 10, 2001)