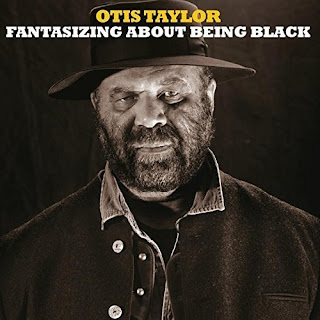 It has never been unusual for blues music – an art form created by and primarily performed by African American artists through the years – to take on issues of race and economic injustice (admittedly often in coded language). No single artist that I can think of has addressed race more frequently, intelligently, and fiercely than the great Otis Taylor. In this era of racial intolerance and divisiveness, Taylor’s unique perspective, historical knowledge, and his skilled songwriting are sorely needed. Thankfully, Taylor’s latest album, Fantasizing About Being Black, will be released on February 27, 2017 by his own independent Trance Blues Festival label.

Following his critically-acclaimed 2015 psych-blues gem Hey Joe Opus/Red Meat, which the Reverend called “a wild musical ride, to be sure…worth the price of admission” in Blues Music magazine, Taylor’s Fantasizing About Being Black offers a lyrical lesson in the historical trauma of the African American experience. In a press release for the album, Taylor says that his 15th album is about “the different levels of racism in the African American experience that are unfortunately still with us today. The history of African Americans is the history of America,” he says.

Taylor says “after 15 albums, I’ve taken all of my thoughts about the history of racial injustice and created a musical interpretation for modern times. When I started recording in 2015, I had no idea the topics would become even more relevant.” The album features seven new songs as well as stunning revisions of previously-recorded Taylor songs like “Twelve String Mile” (from When Negroes Walked The Earth), “Walk On Water” (from Truth Is Not Fiction), and “Jump Jelly Belly” (from Respect The Dead), among others. New songs include “Banjo Bam Bam,” the story of a slave in shackles; the acoustic “D to E Blues,” which expresses the yearning for freedom; and the anthemic “Roll Down The Hill.”

Taylor's choices for instrumentation on the album were deeply considered. “I experimented with banjo and fiddle because slaves on the southern plantations played those instruments,” he says, “and I wanted to include the richness of the early African slave instrument sounds throughout the record.” Taylor adds “if you close your eyes, you can imagine the past, yet see the connections and relevance to what’s happening now.”

A truly unique artist who has been expanding the boundaries of blues music since the release of his 1996 debut Blue-Eyed Monster, the Blues Music Award winner has garnered a truckload of accolades over the past two decades. Otis Taylor proudly walks in the footsteps of blues legends like Charley Patton and Son House, bringing social consciousness to the blues even while putting his own innovative musical imprint on the genre.

Buy the CD from Amazon.com: Otis Taylor's Fantasizing About Being Black