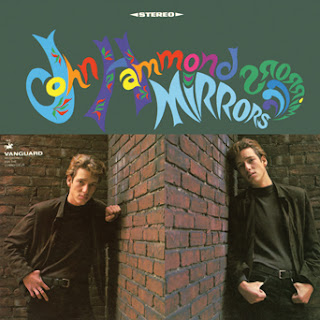 Blues Hall of Fame inductee John Hammond is a giant of 20th century blues, a talented songster whose work has preserved countless blues, gospel, and folk tunes that otherwise might have disappeared from the great Americana songbook. The son of famed Columbia Records A&R legend John Hammond (who discovered Dylan and Springsteen and was an early champion of Delta bluesman Robert Johnson), the young Hammond began playing guitar in high school and dropped out of college to pursue his musical vision. Living in Greenwich Village in the early-to-mid-60s, Hammond hung around and made music with fellow travelers like Jimi Hendrix, Eric Clapton, and Duane Allman.

Hammond has released roughly three-dozen albums since his self-titled 1962 debut, including a critically-acclaimed collection of material by singer/songwriter Tom Waits, 2001’s Wicked Grin. Known as a skilled interpreter of song, Hammond possesses an enormous knowledge of, and deep insight into the material he performs. Signed to the venerable Vanguard Records label early in his career, Hammond recorded so much material during his initial sojourns into the studio that Vanguard was releasing albums long after he’d left the label. Mirrors is one such work, a Frankensteined-production that cuts ‘n’ pastes various performances but somehow comes together as a cohesive album. The original side one is entirely ‘electric,’ Hammond joined in the studio by friends like Charlie Musslewhite and a pre-Band Robbie Robertson and Levon Helm; side two is strictly ‘acoustic.’


Hammond’s rowdy cover of Billy Boy Arnold’s ‘I Wish You Would” spanks the planks from note one. Jimmy Lewis’s fluid bass line opens the song, Musselwhite’s greasy harp jumps in soon thereafter as Hammond growls out the vox above as funky a rhythm as you’d hear in the mid-60s. Hammond’s guitar battles with Robertson’s while the greatest master of the Telecaster, Michael Bloomfield, toils away in the background on piano. Hammond’s take on the great T-Bone Walker’s “They Call It Stormy Monday” is workmanlike but, considering how often the tune’s been covered by literally everybody in the blues biz, Hammond’s languid vocals and subdued instrumentation seem rather lackluster by comparison.

Much more interesting is the unusual reading given Piedmont bluesman Blind Willie McTell’s “Statesboro Blues.” Best known as performed by the Allman Brothers Band, Hammond’s spry take pre-dates Duane Allman’s by a half-decade and has a decidedly rockabilly tint that features guitarists Billy Butler and James Sprull chicken-pickin’ joyfully behind Hammond’s twangy vocals. A cover of Mose Allison’s “I Just Got Here” stands at the crossroads of the Delta blues and big city jazz, and Hammond’s gruff vocals slip and slide across Barry Goldberg’s minimalist keyboard riffs.


A full-band version of Robert Johnson’s “Traveling Riverside” closes out the album’s ‘electric’ side with a bang, the rhythm section of bassist Lewis and drummer Helm laying down a locomotive groove atop which Hammond’s roaring vocals and Musselwhite’s raging harp dance alongside Robertson’s nimble fretwork. The ‘acoustic’ side of Mirrors offers just Hammond and his guitar, an engaging pairing that delves deeply into the traditional acoustic blues that Hammond adores. A pair of Johnson’s songs open the side, slow-burning “Stones In My Passageway” provided ethereal vocals and haunting guitar, effectively capturing the original emotion of the Delta blues classic.

A cover of Johnson’s “Walking Blues” is more upbeat, with Hammond’s gritty vocals and aggressive, percussive guitarplay providing a (then) contemporary sheen to the muddy Delta gem. “Death Don’t Have No Mercy” is a Rev. Gary Davis song, done up nicely here with some elegant fretwork and reverent vocals effectively mixing blues and gospel and taking the song dangerously close to Son House’s darkly-emotional turf. Casual blues fans all know Blind Willie Johnson’s “Dark Was The Night,” but they don’t know that he had a much deeper songbook of blues and gospel treasures. Hammond tackles Johnson’s “Motherless Willie Johnson” (a/k/a “Motherless Children”), his reading differing greatly from Eric Clapton’s better-known cover, the song performed here with reckless abandon that successfully channels the original’s emotional energy.


Released by Real Gone for the first time on CD, in many ways Mirrors is the ‘long lost’ John Hammond album. Longtime fans will be glad to rediscover this obscure gem from Hammond’s bulky catalog, and newcomers will enjoy a unique blues talent. Although Hammond’s vocals sometimes lapse into parody (at least by modern standards), his reverence for the material is undeniable.

Overall, I’d rank the ‘acoustic’ side better than the ‘electric’ side, if only because of the singer’s rapt fascination for the material which is apparent in the performances. A handful of the ‘electric’ songs really rock, presaging the blues-rock blueprint that would also be followed by the Paul Butterfield Blues Band in the 1960s. Bottom line – if you’re a traditional blues fan, what are you waiting for? Grab yourself a copy of John Hammond’s Mirrors. Grade: B+ (Real Gone Music, released October 7, 2016)