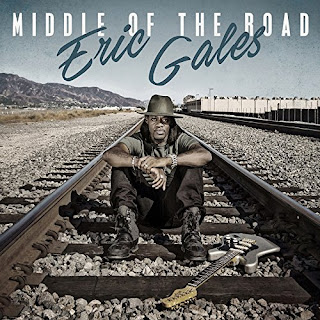 Memphis born-and-bred blues-rock guitarist Eric Gales has enjoyed a storied career. His Hendrix-influenced but unique guitar style was unveiled when Elektra Records released his debut album as the Eric Gales Band (with brother Eugene) in 1991 when the guitarist was but sixteen years old. The talented string-bender has released fourteen studio albums total in the quarter-century since his debut, including ten on major labels, as well as live discs like last year’s A Night On The Sunset Strip CD and DVD.

On February 24th, 2017 Provogue Records will release Gales’ Middle of the Road, the guitarist’s follow-up to his critically-acclaimed 2014 album Good For Sumthin’. It’s Gales fourth album for the esteemed European blues/blues-rock label, including 2010’s Relentless and 2011’s Transformation. The title of the new album – “middle of the road” – is also the theme of the collection. Says Gales, in a press release for the album, “it’s about being fully focused and centered in the middle of the road. If you’re on the wrong side and in the gravel you’re not too good and if you’re on the median strip that’s not too good either, so being in the middle of the road is the best place to be.”

Middle of the Road was recorded with producer Fabrizio Grossi (Supersonic Blues Machine) in locations like Fab’s Lab and Room A Studio in North Hollywood as well as Cuz Studio and Sound in Cleveland, Mississippi and Cotton Row Studios in Memphis, Tennessee. Gales was backed in the studio by drummer Aaron Haggerty, keyboardist Dylan Wiggins, and backing singer LaDonna Gales with Eric providing vocals, guitar, and bass. “I played bass on the entire record, it was beautiful. I’m a bass player at heart,” says Gales, “so Fabrizio was like ‘bro you need to be playing the bass’. It was something that was very natural for me, too. I loved it.” Guests on the album include Lauryn Hill, Gary Clark Jr, Lance Lopez, and brother Eugene, among others.

Much of Middle of the Road deals with the changes in Gales’ life as he’s kicked his addictions and embarked on a new journey. This new direction is reflected on “Change In Me [The Rebirth]” of which Gales says, “I changed up some things in life and decided to go a new route.” The song “Carry Yourself,” co-written with Raphael Saadiq, is about Gales’ wife LaDonna. “It’s about how we met and how we grew to get to know each other through life and how she’s always carried herself. It has always been something I’m fascinated with.” The album’s lone cover is of Freddie King’s “Boogie Man,” which features a duel with fretburner Gary Clark Jr., while Gales’ original “Help Yourself” features sixteen year-old guitarist Christone “Kingfish” Ingram.

Although he’s been in the trenches for better than 25 years now, Gales has seldom received the acclaim that he so richly deserves. Fellow musicians are aware of his talent, however, with artists like Joe Bonamassa, Carlos Santana, Dave Navarro (Jane’s Addiction, Red Hot Chili Peppers), and Mark Tremonti (Alter Bridge), among others, singing Gales praises. Middle of the Road may just be the album that earns Eric Gales the success and status he’s due.

Buy the CD from Amazon.com: Eric Gales' Middle of the Road