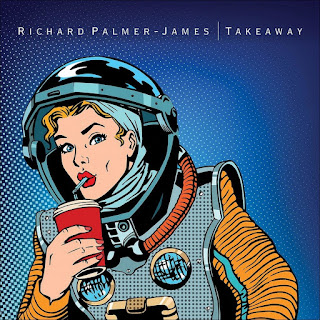 This wonderful little album flew under the radar for most of us, 2016 a horrible year where the enthusiastic appreciation of the year’s good music was dampened greatly by the parade of rock ‘n’ roll obituaries that horrified us all. Somewhere in between the bad news and the worse news, Richard Palmer-James' lovely Takeaway album flitted by, ignored by both the mainstream music press and many music blogs that claim to revel in such indie-rock fare.

For the unknowing, Richard Palmer-James should be a huge name in rock music rather than the sorely overlooked footnote he seems to have become. A friend and early bandmate of prog-rock legend John Wetton, as “Richard Palmer” he was a founding member of the British art-rock outfit Supertramp, contributing to the band’s 1970 self-titled album as a singer, guitarist, and songwriter. A gifted wordsmith in a band with two other strong songwriters – Rick Davies and Roger Hodgson – Palmer left Supertramp shortly after the release of the band’s debut.

Palmer-James resurfaced when his old pal Wetton took a gig with Robert Fripp in the restructured, mid-1970s version of King Crimson. The band’s original lyricist, Pete Sinfield, had been ousted by Fripp and Crimson was looking for a new word-wrangler. Enter Palmer- James, who contributed lyrics to what are widely considered to be three of the band’s best, and most influential albums – 1973’s Larks’ Tongues in Aspic (1973) and 1974’s Starless and Bible Black and Red – after which Fripp broke up the band until the ‘80s. Palmer-James would later perform with former Crimson members Wetton and David Cross, releasing a 1979 album as Jack Knife with Wetton.


Palmer-James has never forged much of a solo career as a recording artist, seemingly preferring his status as a lyricist. If he’d done nothing more than help launch Supertramp and bolster King Crimson during a tumultuous time, he’s earned his place in rock ‘n’ roll history. So it’s no surprise that Takeaway, Palmer-James’ solo debut, coming so late in the artist’s career, should be overlooked in today’s mad, mad world. ‘Tis a shame, too, ‘cause Takeway is a powerful showcase for a talented scribe and composer with a unique, timeless sound that would certainly appeal to today’s hordes of indie-rock fans. Palmer-James’ vocals remind a lot of the late Leonard Cohen’s, a sonorous half-spoken/half-song voice that draws equally from rock, blues, and folk traditions and place a songs’ emphasis on the literary lyrics.

Takeaway kicks off with Palmer-James’ charming “Aerodrome,” a wistful look at lost youth by an aging protagonist that is swirling with odd, imaginative instrumentation. “A Very Bad Girl” is a more traditional rock song, with some fine rockabilly-tinged guitar and a walking bass line underscoring the singer’s clever, humorous verses. The poetic “Chances Passing” offers Palmer-James’ typically obtuse lyrics punctuated by some elegant fretwork and minimalist percussion while “Dance For Me” is a bluesy, up-tempo, lusty tune with wiry guitar licks and engaging rhythms.

With a world seemingly in ruins, “Honest Jim” looks for a hero among the chaos with cheeky lyrics, filigree guitar-strum, and syncopated percussion. The languid “Guano Blues” is based on a bluesy piano run reminiscent of Pinetop Perkins while Palmer-James’ spry vocals dance lively above the shuffling rhythm. The lush “Saving You From Drowning” is a hauntingly beautiful, seemingly auto-biographical ballad that features Palmer-James’ wan vocals supported by a deceptively mesmerizing soundtrack with a mournful romantic undercurrent created by sparse use of accordion to provide accents. The album’s title track is a similar construct, its familiar melancholy melody and lovely instrumentation perfectly underlining Palmer-James’ yearning vocals.


Richard Palmer-James’ Takeaway works as an album on a lot of different levels – Americana aficionados would appreciate his cross-genre hybrid sound and indie-rock fans could embrace his singer/songwriter prowess – while the rest of us can simply enjoy the album’s throwback sound that contemporizes 1970s-era folk-rock for a modern era. A wonderfully-gifted songwriter, evocative vocalist, and underrated guitarist, Richard Palmer-James has taken decades to do so, but he’s delivered an impressive, engaging debut album with Takeaway.

‘Tis all the more the shame that today’s media landscape offers little room for such a charming, personal album to thrive commercially. That shouldn’t stop you from checking out Takeaway, however, Richard Palmer-James a talent worth your time to discover! Grade: B+ (Primary Purpose Records, released October 14, 2016)