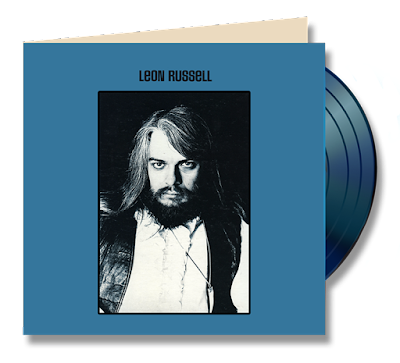 Leon Russell was one of the most accomplished musicians in the annals of rock ‘n’ roll. As a session musician, he was a member of the legendary Wrecking Crew, and his honky tonk-inspired piano-pounding can be heard on albums by artists as diverse as the Beach Boys, the Ronettes, the Byrds, and Darlene Love, among many others. As a songwriter, his tunes like “Delta Lady,” “This Masquerade,” and “A Song For You” were hits for artists like Joe Cocker, the Carpenters, and George Benson. As a solo artist, Russell recorded better than 30 albums, scoring a number of hits in the mid-to-late ‘70s with works like Carney, Will O’ The Wisp, and Stop All That Jazz.

Even after he’d achieved rock stardom, Russell continued to lend his talents to recordings by friends like Bob Dylan, George Harrison, the Rolling Stones, and other heavyweights who would pick up the phone and give Leon a call when they wanted some rockin’ piano on their records. So, when time came for Russell to record his self-titled solo debut album in 1970, he simply opened up his address book and enlisted the help of talented folks like guitarists Eric Clapton and Delaney Bramlett, bassist Klaus Voorman, and drummer Buddy Harmon in the studio.

That wasn’t the end of the album’s all-star cast, though – there were guest appearances by 3/5 of the Rolling Stones (Mick Jagger, Bill Wyman & Charlie Watts) and 1/2 of the Beatles (George Harrison, Ringo Starr) as well as skilled musicians like saxophonist Jim Horn, drummer Jim Gordon, keyboardists Steve Winwood and Chris Stainton (Grease Band), and background singers like Joe Cocker, Bonnie Bramlett, and Merry Clayton. Aside from vocals, Russell also played piano and guitar as well co-producing the album with Denny Cordell for their independent Shelter Records label.

To justify the contributions of all the above-named talents, Russell also whipped up a stellar set of songs, and the track list of his debut LP includes such enduring tunes as “A Song For You,” “Shoot Out On the Plantation,” “Hummingbird,” “Delta Lady,” and “Give Peace A Chance” (co-written with Bonnie Bramlett). The album proved to be a modest hit, peaking at #60 on the Billboard chart and setting the stage for the following year’s Top 20 breakthrough album, Leon Russell and the Shelter People.

On April 28th, 2017 the fine folks at Audio Fidelity – best known for their swanky hybrid SACD archival releases – will reissue Leon Russell, the album, on deluxe 180g blue translucent vinyl with a gatefold sleeve. If you have any cash left over after Record Store Day, this is one you should really get a copy of; Leon Russell is a spectacular collection of performances by some of the biggest and brightest marquee names of 1960s-era rock and the artist’s first step towards his induction in the Rock & Roll Hall of Fame.