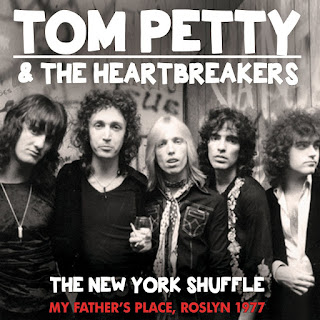 For our inaugural “Bootleg Rodeo,” the Rev has chosen to round up recent live CDs from Tom Petty & the Heartbreakers, Carlos Santana, and George Thorogood & the Destroyers, with links to buy ‘em from Amazon.com.

Tom Petty & the Heartbreakers – New York Shuffle (Sonic Boom)
A lot of shows from the legendary My Father’s Place in Roslyn, New York have appeared on bootleg vinyl and CD through the years, most of them snatched from the frequent and ubiquitous radio broadcasts by WLIR-FM. Radio stations generally hold onto tapes of these shows in their archives for years (or at least until some employee grabs ‘em!), and while more than a few of these previous bootleg releases were no doubt sourced from off-air recordings, in the case of Tom Petty & the Heartbreakers’ New York Shuffle, the sound quality is good enough to believe that it’s a first generation soundboard taping.

Capturing an early Petty & the Heartbreakers’ performance from November 1977 at My Father’s Place, New York Shuffle documents a young band touring in support of their acclaimed debut album. As such, there are spirited performances of great songs like “American Girl,” “Breakdown,” and “Anything That’s Rock ‘n’ Roll” as well as “Listen To Her Heart” and “I Need To Know” from their upcoming album, You’re Gonna Get It! The disc also includes raucous covers of the Isley Brothers (“Shout”) and Bobby Troup’s “Route 66.” To fill out the CD’s tracklist (and get closer to an hour of running time), Sonic Boom added two tracks from a KSAN-FM broadcast earlier in the year, including a rowdy take on Chuck Berry’s “Jaguar & Thunderbird.” The Rev’s recommendation: Buy it! 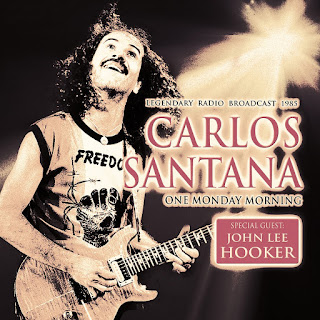 Carlos Santana w/John Lee Hooker – One Monday Morning (Laser Media)
This lil’ disc from the enigmatic Laser Media label bills itself as “legendary” Santana radio broadcast dating from 1985, but that’s really all the information that they’re willing to reveal. Although his name is writ large on the front cover beside his smiling face, with a smaller “Special Guest John Lee Hooker” in a box below, this album has very little to do with Carlos Santana. Rather, it’s a mid-‘80s John Lee Hooker performance, the legendary bluesman backed by his Coast to Coast Blues Band, including guitarist Roy Rogers and keyboardist Deacon Jones.

Nevertheless, there are a few things on One Monday Morning to like, providing you can grab a copy at a decent (> $10) price. There are only eight songs here, two of which feature the CCBB cranking out blues/R&B standards like “Shake Your Money Maker.” They bring on John Lee and, after a couple of perfunctory warm-up tunes (“One Monday Morning” and “I Don’t Know’), the Hook launches into an incendiary reading of his classic “Boom Boom” that offers up some scorching fretwork courtesy of rock ‘n’ roll legend Santana. The sound quality is, to be kind, mediocre, shallow without noticeable equalization, but around half the performances here (i.e. those with Carlos) are incendiary. The Rev’s recommendation: Maybe? 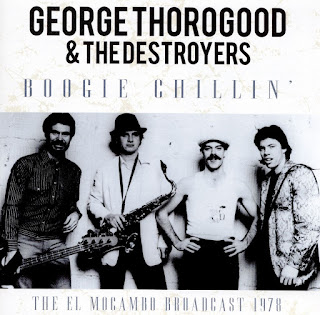 George Thorogood & the Destroyers – Boogie Chillin’ (Zip City)
The El Mocambo club in Toronto, Ontario is one of Canada’s legendary venues, and the site of many a notable performance. Since the club opened in 1948, it’s hosted a literal “who’s who” of incredible performers like Muddy Waters, Elvis Costello, the Rolling Stones, and the Ramones, among others. It’s also been the site of the not-infrequent live FM radio broadcast, like this red-hot set by George Thorogood & the Destroyers, attributed to a July 1978 performance and broadcast by an uncredited local station. Thorogood and his rough-riders had been together a few years at this point and already released two critically-acclaimed albums (1977’s self-titled debut and 1978’s Move It On Over), and the performance documented by Zip City’s Boogie Chillin’ is largely comprised of material from those discs.

This is around the time that the Reverend first saw Thorogood & the Destroyers perform, at Nashville’s Exit/In with the Nighthawks opening, and I can personally vouch for the band’s explosive and entertaining live show. Boogie Chillin’ opens with Thorogood’s lively take on bluesman Homesick James’ “Baby, Please Set a Date” and, from that launching pad, soars with blistering covers of classic early rock ‘n’ blues gems by Bo Diddley (“Who Do You Love?), John Lee Hooker (“Boogie Chillin”), Willie Dixon (“I’m Wanted”), and Chuck Berry (“Reelin’ and Rockin’”). Thorogood was never the most prolific of songwriters in those early days, but his own “Homesick Boy” is an inspired rocker that fits like a glove with the other material here. The sound quality on Boogie Chillin’ is very good, with a sonic few drop outs, and George’s guitar seems to be out-of-tune at times, but Thorogood and crew more than make up for it with the passion and energy of these performances. The Rev’s recommendation: Buy it!
Posted by Rev. Keith A. Gordon at Sunday, May 07, 2017