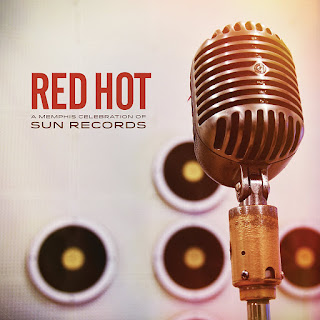 There can be no denying that Sam Phillips’ Sun Records imprint had an enduring and important influence on not only the creation and evolution of rock ‘n’ roll but on the promotion of blues and R&B music as well. Founded in Memphis, Tennessee in 1952, Sun Records is best-known as the initial home of the legend, Elvis Presley. But Sun can also brag of releasing records by then-unknown musical giants like Roy Orbison, Johnny Cash, Jerry Lee Lewis, and Carl Perkins; producer Phillips’ love of R&B also prompted him to record essential early sides by Howlin’ Wolf, Little Milton, Roscoe Gordon, and Memphis’s own Rufus Thomas, among many others.

On June 16th, 2017 the Americana Music Society will release Red Hot: A Memphis Celebration of Sun Records in honor of the Bluff City’s homegrown indie label which changed the direction of popular music. Proceeds from the CD will benefit St. Jude Children’s Research Hospital® which treats children with cancer and other life-threatening diseases. The tribute album was co-produced by roots-rocker Luther Dickinson of the North Mississippi Allstars, and Tamara Saviano, a Nashville-based writer and producer and the author of Without Getting Killed or Caught: The Life and Music of Guy Clark.

Red Hot: A Memphis Celebration of Sun Records was recorded at the two legendary recording studios owned by Phillips – the original Memphis Recording Service, later known as Sun Studio and opened in 1950, and the Sam Phillips Recording Service, opened in 1959 – and the album features performances by a slate of talented roots ‘n’ blues artists. Luther Dickinson and his brother Cody are the sons of late Memphis music legend Jim Dickinson, who recorded for Sun Records in 1966 with his garage-rock band the Jesters. The Red Hot house band includes Memphis singer/bassist Amy LaVere, singer/guitarist John Paul Keith, keyboardist Rick Steff of Lucero as well as the Dickinson brothers on guitar and drums.

Along with vocal performances by Luther Dickinson, John Paul Keith and Amy LaVere, Red Hot includes contributions by Valerie June, Shawn Camp, Jimbo Mathus, Alvin Youngblood Hart, and the great Bobby Rush. Check out the Red Hot website for more info on the project and then order this worthwhile CD from Amazon.com.