STIV: The Life and Times of A Dead Boy 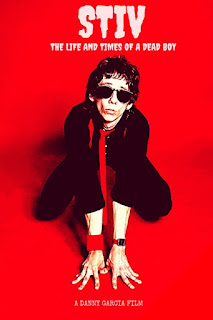 Stiv Bators was a one-of-a-kind rock ‘n’ roll frontman, a charismatic singer and performer who, while maybe not the greatest singer in the history of the genre, was nonetheless talented enough to infuse his lyrical delivery with no little attitude and emotion. Bators is, perhaps, best known as the singer for Cleveland, Ohio punk pioneers the Dead Boys, and for the international hard rock outfit Lords of the New Church, the former a legendary and influential group and the latter enjoying modest commercial success both stateside and in the U.K.

Few but the faithful know that Bators was a solo artist with a fine, if obscure pop-punk album recorded for Greg Shaw’s Bomp! Records label. He was also the frontman for a number of long-forgotten, fly-by-night bands like the Whores of Babylon (with Dee Dee Ramone and Johnny Thunders of the New York Dolls) and the Wanderers (with Dave Tregunna of Sham 69). Bators tragic, accidental death in 1990 robbed the world of rock ‘n’ roll of an influential voice.

STIV: The Life and Times of A Dead Boy is a feature-length documentary film focused on Bators and his care3er. The first film ever made about the controversial singer, Bators’ life will be remembered through archive footage, photography, music, and new interviews with those who knew him. Filmmaker Danny Garcia will direct the project, and it’s not his first rodeo in the punk rock arena, with films like The Rise and Fall of the Clash and Sad Vacation: The Last Days of Sid and Nancy to his credit.

With a tentative release date of May 2018, Garcia has launched an IndieGoGo crowdfunding effort to raise the cash to complete the film. With a number of interviews already in the can, the filmmaker needs to raise some cash to conduct more interviews, edit the film footage, and license music for the movie. Listen to some classic Stiv tunes like “Sonic Reducer,” “Ain’t It Fun,” or “Russian Routlette” and then surf over to the STIV fundraising page and check out the various perks available for your support of this worthwhile project.