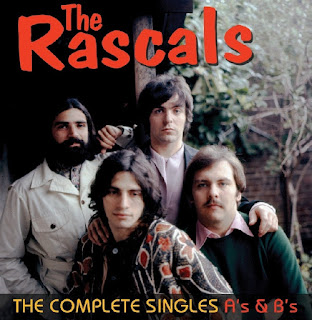 Before Bruce Springsteen, before the Misfits, even before Bon Jovi, a little band by the name of the Rascals were New Jersey’s favorite rock ‘n’ roll sons. Formed in 1965 by singer Eddie Brigati, keyboardist Felix Cavaliere, guitarist Gene Cornish, and drummer Dino Danelli and originally known as ‘The Young Rascals’ (to avoid a naming conflict with another group), three of the band’s four members were already music biz veterans at the time, making their bones as members of Joey Dee and the Starliters, best known for their 1961 hit “Peppermint Twist.”

As the Young Rascals, the band made its first television appearance on the popular Hullabaloo TV show, performing their debut single “I Ain’t Gonna Eat My Heart Out Anymore,” an ahead-of-its-time rocker with no little soul that would become a modest hit in Canada but stall out at #52 on the U.S. charts. The band fared much better with their second single release, the chart-topping classic “Good Lovin’,” an upbeat rocker with hot git licks, gang vocals, and an infectious radio-ready melody; both songs would later appear on their self-titled 1966 debut album, which would rise to #15 on the charts.

Emboldened by their success recording other people’s material, the songwriting duo of Brigati and Cavaliere began cranking out their own original Top 20 hits: “You Better Run,” a swaggering slab of rock ‘n’ roll with raging keyboards; the soul-drenched “I’ve Been Lonely Too Long;” the laid-back “Groovin’,” which topped the charts, its languid groove (sorry) unlike anything else on the radio at the time; the lofty, popish “A Girl Like You;” and “How Can I Be Sure,” another pop-based confection with complex orchestration; all charting over a period of roughly eighteen months. The band’s R&B influenced, blue-eyed soul sound was not dissimilar to that of contemporaries the Box Tops (with Alex Chilton) but their willingness to experiment with jazzy elements and Latin influences would put them a step ahead of their competitors for chart position.


The Young Rascals were more than a mere singles band, however, as their first three albums also charted Top 20, with Groovin’ – fueled by the LP’s hit title track – rising as high as #5 on the charts. The band dropped the ‘Young’ from their name with the November 1967 release of the single “It’s Wonderful” and its accompanying album, the Top 10 Once Upon A Dream, known thereafter as simply ‘The Rascals.’ Their chart dominance continued through the end of 1968 with songs like the charming “A Beautiful Morning,” which featured gorgeous group harmonies; “A Ray of Hope,” a Curtis Mayfield-styled, mid-tempo soul tune in pop trappings; and the socially-conscious, chart-topping “People Got To Be Free,” which offered another great sing-along chorus punctuated by jazzy horns.

But cracks were beginning to develop in the band’s facade as their drift towards a more psychedelic sound that began with the Once Upon A Dream album continued with the two-LP concept set Freedom Suite, the band’s last Top 20 charting album. From 1969 onwards, Rascals’ singles like the gospel-tinged “Heaven,” with its nimble vocals and washes of church organ; the feverish “See,” an up-tempo psych-rocker with lively instrumentation; and “Carry Me Back,” with its honky-tonk piano-pounding and barroom vocals, all experienced diminishing commercial returns. Unfairly, by 1970 the band clearly couldn’t buy a hit, and singles like the muted “Glory Glory” (which suffered from bad production) and “Right On,” a cross between Southern rock and Memphis soul, failed to keep up with changing musical trends, although almost all of the band’s singles continued to sell better in Canada, where they had a loyal following. Brigati left the band in 1970 with Cornish following him out the door shortly after the 1971 release of Search and Nearness.


Cavaliere essentially inherited the band at this point, pursuing a more eclectic jazz-flecked sound on albums like 1971’s Peaceful World and the following year’s The Island of Real, neither of which would break into the Top 100, the former yielding just one charting single with “Love Me,” the band’s Motown-styled return to its blue-eyed soul roots, while the latter album’s four single releases failed to chart altogether. Cavaliere would subsequently break up the band and pursue a solo career with modest success. The inevitable reunions would follow, with the Rascals inducted into the Rock & Roll Hall of Fame in 1997 and Brigati and Cavaliere inducted into the Songwriter’s Hall of Fame in 2009.

Real Gone Music’s The Complete Singles A’s & B’s is a two-disc set that delivers exactly what the title promises, compiling every single release by the Rascals, 47 songs in total, including Spanish and Italian language versions of the monster hit “Groovin’,” which may be one too many for most folks. From the gem that is 1965’s “I Ain’t Gonna Eat My Heart Out Anymore,” which has since been covered by artists like Southside Johnny, Angel, and the Jackson 5, to 1972’s “Jungle Walk,” an early entry into the funk sweepstakes sporting a jumpin’ groove, low-slung rhythms, and shuffling fretwork, The Complete Singles A’s & B’s captures the best of the Rascals. There’s a lot to like about the lesser-known B-sides as well, like the band’s rockin’ 1966 cover of the standard “Mustang Sally” or 1971’s “Saga of New York,” its driving rhythms and instrumental urgency a good three to five years ahead of its time.


Although the Rascals enjoyed a great deal of success with their album releases, which provided the songwriting duo of Brigati and Cavaliere room to stretch out musically beyond the constraints of the three-minute radio-friendly format, there can be no argument that the Rascals were the consummate rock ‘n’ roll singles band. The Rascals placed nine songs in the Top 20 over a two-year period, and it should come as no surprise that the 1968 compilation Time Peace: The Rascals’ Greatest Hits was their only chart-topping album.

Real Gone’s The Complete Singles A’s & B’s offers a chronological document of the Rascals’ evolution as rock ‘n’ roll innovators, with more than a few treasures hidden between the band’s better-known tracks. The set includes lengthy liner notes and some rare, very cool photos of various singles’ picture sleeves. Altogether, this is the set that Rascals fans have deserved for quite some time, as well as a gateway to their full-length albums for the casual or new listener. For a few years in the late ‘60s, no other band in rock ‘n’ roll could touch the Rascals, and The Complete Singles A’s & B’s shows why. Grade: A (Real Gone Music, released March 3, 2017)

Buy the CD from Amazon.com: The Rascals’ The Complete Singles A’s & B’s