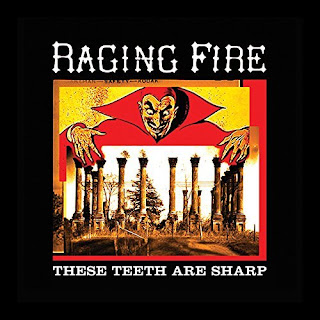 Nashville’s Raging Fire was, perhaps, the best ‘80s-era band that you never heard. As recent as a couple years back, unless you were blessed by the gods of rock ‘n’ roll to have seen one of their Southeastern performances during the band’s too-brief tenure, all that remained of their legacy was a pair of firecracker recordings and a red-hot memory branded into your brain. Formed in 1984, they were gone by ’89, swept away by the plodding hoofbeats of grunge, the architects of the band’s unique sound and fury moving on to jobs, families, and lives outside the realms of rock.

Sometimes the gods smile upon we mere mortals, however, and such was the case when Raging Fire’s surviving members – powerhouse vocalist Melora Zaner, bassist Les Shields, and drummer Mark Medley – decided to take a look back at their collective past and honor the memory of their fallen band members, guitarist Michael Godsey and bassist Lee Carr, by releasing the retrospective set Everything Is Roses, 1985-1989. Collecting every sonic scrap recorded by the band for posterity, as I wrote upon its release, “Everything Is Roses is more than a mere nostalgia-tinted look backwards...the compilation instead a worthy snapshot of a time and place were an outfit as original and energetic as Raging Fire, with an enormous musical chemistry, could develop outside major label demands and expectations.”

Raging Fire’s These Teeth Are Sharp


In the wake of the 2015 release of Everything Is Roses, Raging Fire got back together and, with some friends pitching in to help, they performed a reunion show in Nashville. That led to the writing of some new songs and, long story short, a wondrous new 2017 Raging Fire album titled These Teeth Are Sharp, the band’s 30+ years-in-the-making follow-up to 1986’s Faith Love Was Made Of album. The core gang of Zaner, Medley, and Shields are here along with contributions from friends like guitarists Joe Blanton (The Bluefields, Royal Court of China) and Jeff Cease (The Black Crowes, Rumble Circus) and keyboard wizard Giles Reaves (one of the Music City’s most underrated talents). The old musical chemistry is definitely present, even with addition of the band’s new playmates, making the nine songs to be found on These Teeth Are Sharp every bit as raucous, intelligent, and anarchic as the band has ever been.

From the opening riff of the title track, one can hear the presence of something supernaturally special. Zaner sings unlike any vocalist you’ve ever heard, her kittenish voice capable of twisting emotion into a things of dark beauty while the backing instruments shift directions with whiplash brutality. “A Narrow Sky” shows its talons early on with swooping guitar licks and Zaner’s poetic lyrics yielding devastating imagery like “do you know the feeling when the air closes in as quiet as the grave?” which is sung in an ethereal voice as menacing as it is seemingly innocent. The album’s lone cover, of the 1960’s-era Rufus Thomas hit “Walking the Dog,” is as alien an interpretation of the Memphis soul classic as you’ll ever hear with breathless, stilted vocals, sparse rhythm, and delightfully jagged fretwork that work in spite of the fact that it probably shouldn’t.

By contrast, “Free to Be” is a bouncy pop song with rapid-fire vocals (some sung in Chinese…), Medley’s stormy percussion, jangly guitars, and an altogether energetic vibe that seems like a genetic hybrid of R.E.M. and the Talking Heads but with pure Raging Fire DNA. “Raindances” is a rocker with imaginative guitarplay coupled with John Reed’s concrete bass lines and Medley’s unrelenting drumbeats, tho’ it, too, throws a spanner in the works with quiet passages that crescendo to an explosive finish. These Teeth Are Sharp closes with “Dreams From Under the Love Seat,” one of the band’s few songs with lyrics written by drummer Medley, who displays a knack for imagery-drenched wordplay. Zaner delivers a stellar vocal performance while the guitars sting with the anger of a thousand wasps and the instrumentation, overall, washed over you like a gentle tsunami.


Here in 2017, Raging Fire is, perhaps, the best band that you’ve never heard. This time, however, you can change this sorry status by heading over to the band’s website and grabbing up a copy of These Teeth Are Sharp before Raging Fire once again disappears into the mists of time. The band’s blend of words and music is as alchemical as it’s ever been as they expand upon their original sound without treading across old creative grounds, exploring new creative pathways. There’s plenty for the band’s old fans to like about this year’s model of Raging Fire, and a world of wonder for the newcomer to explore. The gods of rock ‘n’ roll are pleased… Grade: A (Pristine Records, released May 12, 2017)

These Teeth Are Sharp is available from the Raging Fire website