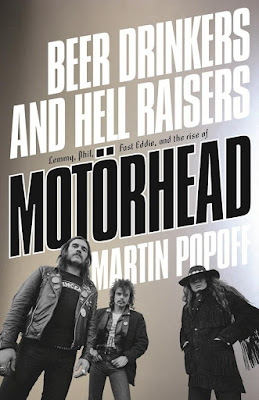 In this scribe’s humble opinion, no other band epitomizes the pure, undistilled spirit of rock ‘n’ roll more than Motörhead. A saber-rattling golem formed from spilled whiskey, broken glass, and handfuls of amphetamines, Motörhead lurked forward from the shadows of the back alleyways of the United Kingdom to rock the world. Lemmy K’s musical leviathan toured constantly for nearly four decades until, literally, the band’s erstwhile frontman could no long stand upright on stage and sing.

Motörhead was equally influential (and well-liked) by punk rockers, metalheads, and your garden-variety punters, and although none of their 30 or so studio and live albums enjoyed overwhelming commercial success, they sold well enough to sustain the band’s lengthy tenure in the trenches. Why they haven’t been inducted into the joke that is the Rock & Roll Hall of Fame is beyond my comprehension – perhaps their reputation for grime upsets the delicate sensitivities of Mr. Wenner and his HoF gatekeepers – but the band’s loyal fans recognize Motörhead as the rock ‘n’ roll pioneers that they were.


Writer and heavy metal historian Martin Popoff is no newcomer to Motörhead. The founder and editor of Canada’s esteemed Brave Words and Bloody Knuckles music zine, Popoff has penned 55+ books on hard rock and heavy metal, including acclaimed tomes on Deep Purple, Yes, Thin Lizzy, Rainbow, and Dio, among many, many others (really – check out his website!). In the interest of full disclosure, Popoff is also a colleague and a buddy of mine, and I’ve enjoyed and positively reviewed a number of his books. In many cases, Popoff’s work stands as the last word on his subjects, and if his recent Beer Drinkers and Hell Raisers: The Rise of Motörhead isn’t necessarily the final tale to be written about this influential gang of sonic terrorists, it is certain to be the cornerstone of any other author’s future effort.

With Beer Drinkers and Hell Raisers, Popoff literally recounts only the “rise of Motörhead,” circa 1975 through 1982. Rather than attempt to chronicle the band’s entire 40 year history, Popoff instead chooses to cover the band’s early “classic era” line-up, the primal power-trio of bassist Ian “Lemmy” Kilmister, guitarist “Fast” Eddie Clarke,” and drummer Phil “Philthy Animal” Taylor that recorded such enduring hard rock albums as Overkill, Bomber, Ace of Spades, and the bruising live set, No Sleep ‘til Hammersmith. As per his usual ‘modus operandi,’ Popoff assembles the story from numerous interviews with the principal artists as well as providing comments from conversations with other musicians.

The Rise of Motörhead


Popoff begins the Motörhead story with Lemmy’s initial ‘60s-era bands (The Rocking Vicars, cult rockers Sam Gopal), his stint as a roadie for Jimi Hendrix, and his short, tho’ ultimately important tenure with U.K. space-rock pioneers Hawkwind. Lemmy first appeared on Hawkwind’s third album, 1972’s Doremi Fasol Latido, subsequently recording 1974’s Hall of the Mountain Grill and the following year’s Warrior on the Edge of Time, as well as the classic 1973 double-live set Space Ritual. Lemmy also penned Hawkwind’s lone hit single in “Silver Machine” before he was booted from the band for his well-documented recreational excesses. One could say that, in many ways, Lemmy put together Motörhead in response to his sacking by Hawkwind, a move that may have affected Lemmy greatly but essentially set the stage for him to pursue his own unique musical muse with his own band. From this point, Beer Drinkers and Hell Raisers follows Motörhead from its early stumbles in both the studio and on stage as the band eventually gelled with the aforementioned line-up of Lemmy, Clarke, and Taylor.

The author dives deep into the blood, sweat, and tears spent in the writing and recording of the band’s classic early albums; the interpersonal dynamics that helped create such speed-fueled, tension-filled music; and the eventual conflicts that broke this beloved line-up of the band apart. Musicians and fans of the band such as Dee Snider (Twisted Sister), Brian Robertson (Thin Lizzy, and a future Motörhead member), producer Sandy Pearlman (Blue Öyster Cult, The Clash), and Hawkwind’s Dave Brock and Nik Turner, among others, all provide their perspective, while interviews with Clarke and Taylor, as well as Lemmy’s bandmates in the band’s final incarnation, Phil Campbell and Mikkey Dee, help round out the story.


The Reverend has read better than 60% of Popoff’s books to date, and I can honestly say that Beer Drinkers and Hell Raisers: The Rise of Motörhead stands proudly as one of his best efforts. Although he unfolds the band’s story chronologically, the author eschews his frequently-used timeline approach in creating a narrative in favor of following the band from album-to-album, using each recording as a milestone, and allowing the band members and other interviewees to color between the lines.

The result is an entertaining and informative read that sheds no little light into the often-enigmatic Lemmy K. and his life’s work, Motörhead, documenting the early years of one of rock music’s most beloved and underrated outfits. The Rev highly recommends Beer Drinker and Hell Raisers for both hardcore Motörhead fans (duh) as well as anybody who lives and breathes rock ‘n’ roll. Grade: A+ (ECW Press, published May 9th, 2017)