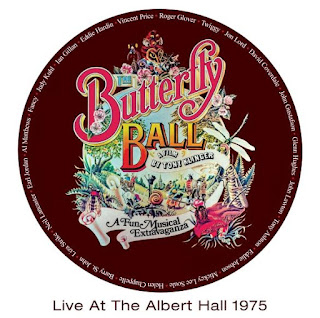 Way back in 1974, former Deep Purple bassist Roger Glover agreed to produce an album by his longtime bandmate Jon Lord, The Butterfly Ball and the Grasshopper’s Feast a concept album based on a popular British children’s poem. When Lord couldn’t find time away from his obligations with Purple, Glover decided to go forward with the project, writing most of the songs and then opening up his phone book and recruiting a veritable “who’s who” of ‘70s British rock ‘n’ roll to record the project, including vocalists Ronnie James Dio, David Coverdale, and Glenn Hughes.

Released in November 1974 in the U.K. (almost a year later in the U.S.), the album earned a modicum of critical acclaim and performed respectively on its home turf, the Dio-sung “Love Is All” hitting the U.K. charts and reaching #1 in the Netherlands. As a result, a single performance of the production was held at the Royal Albert Hall in London on October 16th, 1975. With singer Ian Gillan (Deep Purple, duh…) appearing in place of Dio, who was touring with Ritchie Blackmore’s Rainbow, the performance also included narration from the great Vincent Price and included model/actress Twiggy as one of the singers. The live concert was filmed and released in 1976, produced and directed by Tony Klinger.

Klinger has produced a limited edition, deluxe edition of the live performance of The Butterfly Ball and the Grasshopper’s Feast which includes a double DVD containing the original concert film as well as the re-edited, re-mastered 2017 version; a previously-unreleased double-CD soundtrack from the live performance, a reproduction of the original press pack including five 8”x10” glossy promotional photos, and an A3 sized (roughly 11.5”x16.5”) reproduction film poster. Each box contains a numbered certificate signed by Klinger, and will be strictly limited to 250 copies. The deluxe edition of this beloved performance is available for order from the PledgeMusic website and runs roughly $129 plus shipping.

The Butterfly Ball and the Grasshopper’s Feast is also available in other, less expensive formats from PledgeMusic, including just the two-disc DVD set of the concert (roughly $26) and the two-disc CD set (roughly $19) as well as t-shirts, a poster, and other memorabilia of the event. This is a gift for the Deep Purple fanatic as the concert features vocals from Ian Gillan, David Coverdale, and Glenn Hughes as well as music by Roger Glover and Jon Lord. The concert also includes talents like John Gustafson and Eddie Jobson of Roxy Music, John Lawton (Lucifer’s Friend, Uriah Heep), and Eddie Hardin (Spencer David Group), among others. A cool relic of the classic rock era, check out all the goodies available on the PledgeMusic website.
Posted by Rev. Keith A. Gordon at Wednesday, May 17, 2017