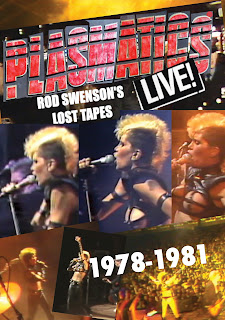 Formed in 1977 by manager/svengali Rod Swenson and notorious lead singer and former porn actress Wendy O. Williams in NYC, the Plasmatics were a wonderful trainwreck from day one.  The controversial punk/metal outfit was known for its anarchic live performances, with the scantily clad Williams – the nipples of her bare breasts covered with strategically-placed black electrical tape – often taking a chainsaw to speaker cabinets or joyfully applying the business end of a sledgehammer to a television set. Arrests for public indecency were not uncommon and, in spite of their outrageous reputation, the band managed to eke out several studio albums and a handful of EPs in the five or six years after their first gig at CBGBs, including Coup d’Etat, released by major label Capitol Records.

Williams recorded three solo albums during a mid-80s band hiatus before releasing a final Plasmatics album, Maggots, in 1987 after which she retired from the music biz. The band’s influence cannot be dismissed, though, their ground-breaking punk rock/heavy metal hybrid and high voltage stage show influencing both contemporaries and bands to follow including Anthrax, the Cro-Mags, the Ramones, and Motörhead. Because of the visual nature of the Plasmatics’ stage show, there have been several DVDs released of the band’s performances, but on May 19th, 2017 Pandemonium Studios, with Music Video Distributors, will release The Plasmatics – Live! Rod Swenson’s Lost Tapes 1978-1981, the DVD featuring rare, previously-unreleased video footage of the band.

During the band’s early years, Swenson – who had directed all the Wendy O. Williams and Plasmatics videos, as well as videos for Blondie, the Ramones, and Motörhead – filmed a number of Plasmatics shows, the footage of which had never been edited or released and, in fact, was thought lost or rotted away. While moving the WOW/Plasmatics archives, however, some of this long-lost footage was rediscovered and while much was damaged, producer/director Randy Shooter was able to salvage, restore, and edit this rare video to create The Plasmatics – Live! Rod Swenson’s Lost Tapes 1978-1981 DVD, which includes two performances from CBGBs which come from the first Plasmatics’ shows. We’ve included the DVD’s complete tracklist below as well as a link to buy the DVD from Amazon. Enjoy!