The world of rock ‘n’ roll lost a giant with the death of Col. Bruce Hampton at the young age of 70 years. Born Gustav Valentine Berglund III, Hampton was a pioneer on the Atlanta, Georgia music scene and a true innovator, albeit an obscure influence on, rock music throughout the 1980s and ‘90s.

Namesake of the Hampton Grease Band, Hampton was brought into the group by guitarists Glenn Phillips and Harold Kelling, who were looking for a frontman for what was essentially an instrumental-oriented band. The HGB gradually built up a loyal audience in the Atlanta area and beyond as they opened for bands like Spirit, the Allman Brothers Band, Jimi Hendrix, and Procol Harum, among many others. 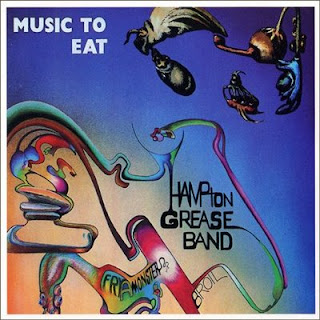 An inspired set at the Atlanta Pop Festival brought the band to the attention of Columbia Records, who signed HGB through Phil Walden of Capricorn Records. The Hampton Grease Band recorded an outrageous two-LP set, Music To Eat, which is said to have represented the label’s second worse-selling album of all time after its release in 1971. The surreal nature of the HGB’s stage performances could never be caught on tape, and their ragged mix of rock, blues, and jazz improvisation relied heavily on the sort of jamming that wasn’t put on records at the time. Through the years, though, Music To Eat has become a collectors’ holy grail of sorts, commanding premium prices even for recent but out-of-print CDs.

Hampton kicked around in several bands after the early ‘70s demise of Hampton Grease Band, the most notable being the Late Bronze Age with his former HGB drummer Jerry Fields. Hampton’s next brush with fame would come with the formation of the experimental rock band Col. Bruce Hampton and the Aquarium Rescue Unit, which included phenomenal instrumental talents like bassist Oteil Burbridge (who would go on to the Allman Brothers and the Tedeschi Trucks Band) and guitarist Jimmy Herring (would would later join Widespread Panic).

The Aquarium Rescue Unit was formed out of a weekly jam session hosted by Hampton in Atlanta. The band’s original line-up would release two albums with Hampton for Capricorn Records: 1992’s self-titled Col. Bruce Hampton and the Aquarium Rescue Unit and the following year’s Mirrors of Embarrassment. Ground-breakers in the growing ‘jam band’ scene, the ARU would find kindred spirits in bands like Phish and Blues Traveler, and together they formed the annual H.O.R.D.E. (Horizons of Rock Developing Everywhere) tour, where ARU’s unique blend of rock, jazz, blues, funk, and even bluegrass music would find an appreciative audience and inspire a generation of young bands who enthusiastically embraced the band’s “anything goes” musical blueprint.

Hampton left the ARU in 1993, and the remaining band members carried on, recording three albums before members moved onto other bands. Hampton would subsequently form the psychedelic jam band the Fiji Mariners, recording a pair of albums for Capricorn Records and appearing on several H.O.R.D.E. tours. Hampton later formed the Codetalkers with guitarist and banjo player Bobby Lee Rodgers, releasing a single studio album before retiring on the eve of the band’s potentially breakthrough tour. Other bands would follow, and Hampton would dabble in TV (notably as the voice of ‘Warren,’ a potted plant, on Space Ghost Coast to Coast) and film (as the character ‘Morris’ in Sling Blade).

Hampton would be the feature of a documentary film, Basically Frightened: The Musical Madness of Col. Bruce Hampton, Ret., which  debuted at the Atlanta Film Festival in the spring of 2012, and the longtime cult artist would honored with the Governor’s Award In The Arts and Humanities by Georgia Governor Nathan Deal the same year. Hampton was honored with a May 1st concert in celebration of his 70th birthday at the Fox Theatre in Atlanta. Friends and former bandmates like Peter Buck (R.E.M.), Warren Haynes (Allman Brothers/Gov’t Mule), John Popper (Blues Traveler), and Kevn Kinney (Drivin’ N’ Cryin’) as well as members of Widespread Panic, Phish, Leftover Salmon, among others, performed to benefit the Fox Theatre Institute. Hampton suffered a medical emergency during an encore, and would later pass away at the hospital. Hampton’s unique perspective and joy in making music will be missed...