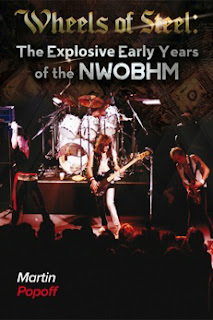 Brave Words & Bloody Knuckles magazine co-founder and former editor, and the author of half a hundred books on bands like Black Sabbath, Thin Lizzy, and Deep Purple (among many others), Martin Popoff is, without a doubt, rock music’s most prolific scribe. Popoff’s knowledge of hard rock and heavy metal from the 1970s through the present day is unassailable, and his books are no mere commercial knock-offs designed to exploit current trends, but rather well thought out and researched tomes based on hundreds (thousands?) of artist interviews that Popoff has conducted over the nearly 25 years he’s spent in rock ‘n’ roll’s critical trenches.

Martin is also a friend of mine, and I’m happy to say that I have a bookshelf overflowing with his books, almost all of which I’ve parted with serious coin to purchase. A Popoff library is essential for hardcore music collectors, each book providing valuable insight into a band’s albums and career. A lot of Popoff’s work is strictly a labor of love, ‘cause you just don’t write books about obscure bands like Max Webster or Riot and expect to get rich…all of which makes my buddy Martin the perfect patsy, er…music historian to take on the Herculean task of putting the “New Wave of British Heavy Metal” into proper perspective. Popoff has recently penned a trilogy on the NWOBHM – Wheels of Steel, This Means War, and Smokin’ Valves – the first two of which are oral histories of the genre, the last being a buyer’s guide to NWOBHM records.


For those unfamiliar, the New Wave of British Heavy Metal was an influential, albeit short-lived musical phenomenon that exploded like a supernova in the United Kingdom during the late ‘70s, burning brightly until roughly the mid-1980s when nerf metal bands from L.A. began dominating hard rock. Just as punk rock emerged in the U.K. as a response to the self-indulgent state of mainstream music at the time, so too did the NWOBHM develop in parallel as an underground alternative to the pop charts for disaffected, working class white youth suffering from widespread unemployment and social inequality in the U.K. The term itself is credited to music journalist Geoff Barton, who first used the NWOBHM phrase in the British music magazine Sounds to describe the growing trend of homegrown heavy metal bands.

Popoff’s Wheels of Steel: The Explosive Early Years of the NWOBHM establishes the groundwork for the NWOBHM via timeline, interspersing quotes by artists, writers, critics, and DJs with important dates and occurrences to form a linear narrative, an intuitive manner of tackling such a heady chore. The early, informative years of the 1970s are tackled in the first chapter, and one could argue that the roots of the NWOBHM began in 1975 when the genre’s earliest bands – Motörhead and Iron Maiden – first formed, and DJ Neal Kay (an integral figure in the story) established a beachhead for hard rock at The Soundhouse, a club within a London pub where he would spin records by such NWOBHM musical influences as Thin Lizzy, Rush, Deep Purple, and Judas Priest. Popoff quotes liberally here from Kay and Iron Maiden’s Steve Harris, both of whom stood firmly in the eye of the developing NWOBHM hurricane and have plenty of memories to share. 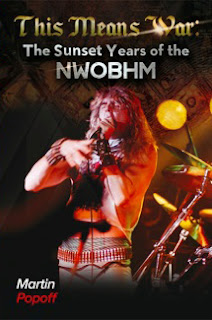 From 1976 on, Wheels of Steel outlines the growth and development of the NWOBHM phenomena through the end of the decade, Popoff exploring the story with his usual keen eye for detail and respect for the music’s history. It’s a saga of hungry bands with a penchant for loud guitars that used heavy metal as a means to express themselves musically. Popoff fills the book with plenty of artistic insight, quoting from numerous interviews with members of NWOBHM bands like the aforementioned Iron Maiden and Motörhead, Tygers of Pan Tang, Saxon, Quartz, Diamond Head, Girlschool, Gillan, and others as well as music journalists, and even the odd punk rocker like the Damned’s Rat Scabies. Wheels of Steel does a great job in capturing the blood, sweat, and tears of the ‘70s decade as those artists who created the NWOBHM share memories of their hopes, dreams, and even some lingering bitterness over the era.


The second volume of Popoff’s trilogy is This Means War: The Sunset Years of the NWOBHM, which picks up the story in 1981, by which time the NWOBHM is in full bloom, creatively and commercially. Popoff uses 1984 as a cutting off point for the NWOBHM, appropriate enough for our purposes as the genre had largely run out of steam by then, the heavy metal flag captured by a greasy bunch of whiskey-swilling gutter rats from the City of Angels, U.S.A. Popoff uses the same narrative technique here as he did with Wheels of Steel, i.e. lots of artist interviews from musicians and others who had a bird’s-eye view from within the NWOBHM combined with a timeline of relevant dates and occurrences.

Where This Means War differs from Wheels of Steel is in the artists’ perspective. Whereas the early days of the NWOBHM provided a portrait of youthful enthusiasm, by 1981 the phenomenon had begun going mainstream and you had record labels, band managers, and other empty suits getting involved with, and often clashing with the young dreamers in the bands. As Hunter S. Thompson famously stated, “the music business is a cruel and shallow money trench, a long plastic hallway where thieves and pimps run free, and good men die like dogs. There’s also a negative side.” In reality, the music biz is a like an industrial shredder, grinding and gnashing good musicians and ruining careers more often than nurturing creativity.

Some of the artists quoted in This Means War are justifiably (still) angry over what they see as mismanagement or malfeasance in the way their careers developed, while others have left their bitterness in the past. Popoff greatly expands the roster of artists he interviewed for This Means War, with holdovers from the first book like Jess Cox of Tygers of Pan Tang, noted NWOBHM producer Chris Tsangarides, Diamond Head’s Brian Tatler, John McCoy of Gillan, and Eddie Clarke of Motörhead, among others, joined by such articulate NWOBHM players as Algy Ward of Tank, John Gallagher of Raven, Bernie Shaw of Grand Prix, and Kevin Riddles of Angel Witch as well as members of bands like Venom, Grim Reaper, and Def Leppard. In doing so, Popoff also expands the narrative, and it seems like This Means War offers more in the way of oral history that its predecessor, documenting the artistic apex and subsequent decline of the NWOBHM as a creative force. 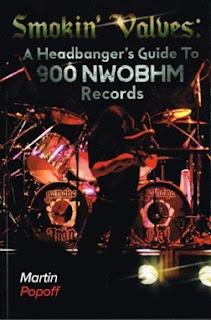 The actual first book in Popoff’s NWOBHM trilogy is the last – but not least – that we’ll discuss here. Smokin’ Valves: A Headbanger’s Guide To 900 NWOBHM Records offers exactly what the title promises, roughly 230 pages of one- and two-paragraph reviews covering hundreds of NWOBHM records. Popoff had previously penned the long out-of-print The New Wave of British Heavy Metal Singles, and he expands upon that effort with Smokin’ Valves by including NWOBHM albums as part of the mix. Popoff also draws upon the hundreds of album reviews he wrote for the 1970s and ‘80s-era volumes of his exhaustive The Collector’s Guide to Heavy Metal series, updating and revamping all of the reviews for this new guide.

If Popoff defined the lifespan of the NWOBHM as 1980 through ’84, with Smokin’ Valves he colors outside the lines a bit by including early, proto-NWOBHM recordings from 1978 and ’79 as part of the discussion, laying it all out for the reader in alphabetical order, and bolding the text of album reviews to differentiate them from reviews of singles and EPs. Much like its kissing cousin – British punk circa 1976-79 – the NWOBHM was very much a singles-oriented art form and, as former Jersey Beat zine publisher Jim Testa once said (or something like this), “not every band can record a great album, but almost every band can record a couple of great songs.”

While not all of them got to record a full-length LP, many NWOBHM bands got their first bite of the apple via 7” vinyl, creating a dizzying discography of bands and records that Popoff puts into proper context with his reviews in Smokin’ Valves. Many, if not virtually all of the singles and EPs listed here are highly-collectible slabs o’ wax that fetch premium prices from fanatical collectors with deep pockets, but many are also easily found on YouTube for those who just want a taste of the music. Albums and singles alike are awarded a numerical grade of zero to ten, similar to Popoff’s previous guides, and he includes appendixes to Smokin’ Valves that list those esteemed albums and singles receiving grades of eight or higher for those fans who wish to begin their collection with the best.


Of the hundreds of NWOBHM bands that littered the landscape circa 1980-84, only three found a significant amount of commercial success and/or notoriety – Def Leppard, who would shed their NWOBHM roots with a series of multi-Platinum™ glam-metal albums through the ‘80s; Iron Maiden, which has steadfastly retained its unique musical identity throughout the decades; and Motörhead, the stubborn-as-hell hard rock outlier driven by the vision of the late, beloved Lemmy K. The relative lack of world-beating chart-toppers in NWOBHM does nothing to diminish the music’s influence and importance, however, as bands like Metallica, King’s X, and Pantera, among many others, would find inspiration in the NWOBHM.

As for NWOBHM “also rans,” bands like Angel Witch, Demon, Grim Reaper, Diamond Head, Quartz, Samson, Tank, Witchfinder General, and Raven, among all the other dreamers and schemers of the NWOBHM, their music lives on as part of the evolution of heavy metal, the records they made 35+ years again still impacting rock ‘n’ roll music to this day. As a chronicler of hard rock and heavy metal, Martin Popoff has done an excellent and thankless job in documenting the history of NWOBHM with these three volumes, providing a voice for these (mostly) obscure artists who brought energy and vitality back to rock music at a time when it was sorely needed.

If pressed, I’d give the edge to Wheels of Steel (Grade: A+) if only for the hope displayed in its pages, but one can’t experience the true breadth of the NWOBHM without also reading This Means War (Grade: A), with Smokin’ Valves (Grade: A-) complimenting both titles by focusing on the recordings of the bands featured in the other books. All three volumes are profusely illustrated – the oral histories by scores of rare and obscure label ads for albums, live show adverts, and other graphics while the “headbanger’s guide” offers dozens of photos of album covers and rarer-than-rare picture sleeves. If you’re a fan/collector of hard rock and/or heavy metal, Popoff’s trilogy is a “must have” for your music library. With these three deeply-researched and well-written books, Popoff has provided as complete and comprehensive a history of the New Wave of British Heavy Metal as anybody is likely to ever write. (Power Chord Press, 2015)

Get all three books, and many more, from Martin Popoff's website!