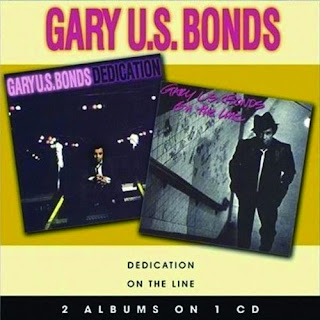 The story goes like this: during the late 1950s, young Gary Anderson was singing in church and playing clubs in and around Norfolk, Virginia, trying to get a foothold in the music biz. The young soul singer’s expressive tenor voice brought him to the attention of local producer Frank Guida, who signed him to his independent Legrand Records label. New Orleans, Anderson’s first single for the label in 1960, was stamped with “Buy U.S. Bonds” on the sleeve, Guida hoping that deejays would mistakenly play the single thinking that it was a public service announcement.

The promotional ploy worked, as the rabble-rousing rock/R&B hybrid song became the newly-christened Gary "U.S." Bonds’ first hit single, topping out at number six on the Billboard charts. A string of national hits would follow circa 1960-63, including Bonds’ lone #1 hit, "Quarter To Three," as well as songs like "School Is Out" (#5) and "Dear Lady Twist" (#9). During a 1963 tour of Europe, Bonds headlined above a young band about to break out that went by the name “The Beatles.”

By 1980, however, Gary U.S. Bonds was a name remembered by only a few faithful collectors of early 1960s soul and a handful of diehard fans. Although Bonds frequented the oldies circuit with other ‘60s-era road warriors, he hadn’t released an album since 1962. A chance meeting with two young fans – Bruce Springsteen and “Miami” Steve Van Zandt – would lead to friendship with the two musicians and later lay the groundwork for a Bonds comeback. Armed with a fair degree of industry juice after the success of his 1980 album The River and its breakthrough single "Hungry Heart," Springsteen used his newly-minted influence to get Bonds signed and in the studio to record an album.

The 1981 album Dedication was the result of this musical collaboration between the middle-aged R&B shouter Bonds and the under-30 rock stars Springsteen and Van Zandt. For fans of Bonds’ earlier work, Dedication was a reminder of the singer’s enormous talent, the songs not so much a throwback to the era as an updating of the trademark Bonds’ style. Springsteen wrote three new songs for the collection and Van Zandt added another, and the two talents also sang and performed and co-produced the set. Other material for Dedication was pulled from the enormously rich Beatles and Dylan song catalogs, along with other covers and a Bonds’ original.

Make no mistake, however, that Dedication is anything but Bonds’ album. His rock star sponsorship notwithstanding, it is Bonds that stands firmly in the spotlight. With Dedication featuring ten songs, mostly recorded with Springsteen’s E Street Band behind him, Bonds takes the material in his hands and quickly claims the territory as his own, his voice in fine form across the entire collection of flashback rockers and stylish soul rave-ups.

The album opens with the spry rocker "Jole Blon," a duet of sorts between Bonds and Springsteen that puts both singers’ voices to good use. Written by ‘40s-era hillbilly star Moon Mullican, the song is an odd bird, a French Quarter-tinged ‘50s style roller that Mullican wrote almost a decade before the rock & roll revolution. The album’s big hit single was "This Little Girl," an R&B revue styled knockout penned by The Boss in his best old school style. With a fair amount of vocal gymnastics by Bonds and featuring a killer King Curtis sax solo by the "Big Man," Clarence Clemons, the song’s infectious melody and soulful swagger still resonates after a quarter-century of play.

The rest of Dedication follows suite, Bonds working his magic on a handful of Springsteen and Van Zandt tunes written specifically for his use along with a few well-chosen yet surprising covers of tunes by Lennon/McCartney (the aching heartbreaking "It’s Only Love"), Bob Dylan (a bluesy take on "From A Buick 6" with honky-tonk piano) and Jackson Browne (a magnificently naïve reading of "The Pretender"). Springsteen’s "Your Love" could pass for a Southside Johnny tune, with big delicious horns supporting Bonds’ emotional crawl. The title cut is no-frills party rocker, a hard-boppin’ stroll down the Asbury Park boardwalk underlined by Clemons’ honkin’ sax and a raucous instrumental undercurrent while Bonds’ original "Way Back When" is a nostalgic look back at an era of simple love songs and brightly-colored lyrics with an early 1960s big band soundtrack.

Dedication came out of left field, standing out from the early 1980s glut of arena rockers, hardcore punks, and new wave pop stars to grab its own little piece of turf on the charts, "This Little Girl" climbing to #11 on the Billboard charts and the album itself peaking at #27. With a Top Thirty hit album under Bonds’ belt, a sequel to Dedication was a given, so Springsteen got back to work and whipped up seven new songs and, with Van Zandt once again helping out on the board, and with the E Street Band backing him in the studio, the gang crafted the wonderful On The Line with Bonds at the forefront.

More than a mere sound-alike sequel to Dedication, the songs (and the performances) found on On The Line are grittier, harder-edged and even more soulful than on Bonds’ comeback album. Released in mid-1982 with the Reagan recession in full-bloom, Springsteen’s mind was on the working man and On The Line shows it. A finely-tuned collection of blue collar anthems, Bonds was the perfect choice to belt out these songs, his vocals across the album an inspired mix of dirty rock & roll and emotional soul.

The album opener, "Hold On (To What You Got)" is an anthemic blend of blind romanticism and spirited defiance, with a rocking guitar solo and shotgun-blast vocals by Bonds. The album’s lone Top Thirty hit single, "Out Of Work," is also On The Line’s defining moment. Another Springsteen composition, the song’s vintage sound and bouncy instrumentation is complimented by pitch-perfect Bonds vocals, appropriately joyous and yet world-weary. "Club Soul City" goes the other direction entirely, with sparse instrumentation shadowing Bonds’ soulful wail, his vocals overwhelming the young pups (Springsteen and Van Zandt) with his incredible control and emotion; Springsteen’s lyrics are literally drenched in pathos.

The R&B classic "Soul Deep" is provided a decent, albeit rough-hewn vocal performance by Bonds, with the E Street boys backing him up, while another Springsteen composition, the heart-breaking "Love’s On The Line," is supported by lush instrumentation, fine vocals and a highly-textured sax solo courtesy of you-know-who. "Turn The Music Down" is a Bonds original done up like his early '60s hits, a rollicking parents-versus-kids defense of rock music that typically translates better on stage than on record. "Rendezvous," one of Bruce’s better B-sides, is handed off here to Bonds, and the singer takes it to the goal line. Although Bonds’ vocals aren’t as transcendent as Springsteen’s on his original version, they’re nevertheless sweeter and loftier, with an innocent edge.

Although On The Line didn’t make nearly the commercial splash of its predecessor, the collection did yield a hit single in the aforementioned "Out Of Work," and the album worked its way up the crowded charts to a respectable #52 position. Sadly, this American Beat reissue that pairs Dedication with On The Line drops the otherwise robust Van Zandt song "Last Time" from the CD. Although they might have been able to shoehorn the song in…I hate incomplete albums…this “twofer” CD is nonetheless a fine representation of Bonds’ Springsteen-sponsored “comeback” era, the singer finding a new audience with bold new material instead of relying on his old hits for applause.

Bonds would record one more album during his “comeback” phase, the often overlooked Standing In The Line Of Fire, working with Van Zandt for the title track and with his touring band in the studio for the 1984 release. The album, although a worthy successor to the two Springsteen-fueled discs, largely fell on deaf ears and sold poorly. As the decade wore on, Bonds receded once again to the background, touring sporadically and seldom recording (nothing but low-budget live discs during this period), before re-emerging two decades later with the tongue-in-cheek titled Back In 20 album in 2004.

A fresh reminder of Gary "U.S." Bond’s immense talents, Back In 20 is a fine bookend to the often-overlooked singer’s incredible work on Dedication and On The Line. (Trademark of Quality blog, 2007)

Buy the CD from Amazon.com: Gary "U.S." Bonds' Dedication/On the Line
Posted by Rev. Keith A. Gordon at Saturday, February 27, 2016