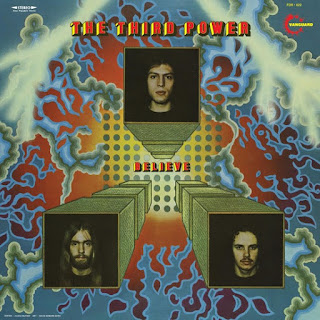 Record Store Day is still 63 days away as of this writing, and little has been revealed about what sort of vinyl labels – large and small – will be releasing for the holiday. Light In The Attic Records has announced a few items for RSD, though, including a Shaggs’ 7” single, but hard rock collectors will be salivating over the first release on vinyl in 45+ years of the Third Power’s Believe album.

Third Power was formed by guitarist Drew Abbott, bassist/singer Jem Targal, and drummer Jim Craig in 1965 in Detroit, but they didn’t get their act together to perform live until 1968, at which time they joined a thriving and competitive Motor City rock scene that boasted of future legends like MC5, Bob Seger, the Stooges, SRC, and Dick Wagner’s Frost. Third Power’s growing reputation as a live band performing at rough ‘n’ tumble clubs like Detroit’s legendary Grande Ballroom got them signed to Vanguard Records, also Frost’s label.

Working with Samuel Charters, who had produced albums by both Frost and Country Joe & the Fish, Third Power recorded their only album, Believe, which was released by Vanguard in 1970. Believe barely scraped its way onto the Billboard Top 200 albums chart (#194) and Third Power was subsequently dropped by the label, the band breaking up shortly thereafter. Abbott went on to become an integral part of Bob Seger’s Silver Bullet Band during the late 1970s and early ‘80s, and Targal released a single solo album before disappearing from the scene.

Over the years, Third Power has become considered as one of many revered Motor City cult bands (along with SRC, the Up, and the Rationals). A classic power trio in the Cream vein, Third Power was capable of pulling off fine melodies and vocal harmonies amidst its roaring instrumental Sturm und Drang, the band mixing psychedelic and hard-rock with a hint of folk and blues influences. Lost for decades even as it grew in status, Believe was first released on CD by Italy’s Akarma Records and has seen subsequent CD reissue – mostly as a dodgy semi-bootleg – by a number of fly-by-night outfits.

Light In The Attic’s vinyl reissue of Believe is a 2016 Record Store Day exclusive pressed on red wax and mastered from the original tapes. The album is housed in a deluxe gatefold “tip-on” jacket and will include a download card for eleven bonus tracks, including a non-album B-side, a couple of live tracks from the Grande Ballroom, and a bunch of studio outtakes. Liner notes by Willy Wilson include quotes from Abbott and Targal as well as producer Sam Charters, and the accompanying booklet includes previously unpublished photos.

“Like a meteor shooting across the horizon, the Third Power lit up the Detroit music scene with a ferocious roar like no other group before them. But like all meteors, they only burned bright for a short while…” Wilson writes in the liner notes, which perfectly captures the brilliance that was Third Power. If you’re a fan of high-energy Motor City rock ‘n’ roll, or just guitar-driven 1970s-era hard rock, you’re gonna love Believe! Get your ass down to your local indie record store on April 16th and buy a copy...