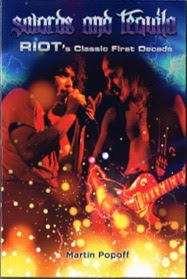 The reputation of American heavy metal pioneers Riot, the high esteem in which they’ve long been held by metal fans, far outpaces the band’s meager album sales over the decades. Formed in 1975 by the late guitarist Mark Reale and drummer Phil Bitelli, the pair added bassist Phil Feit and frontman Guy Speranza and Riot was born. There were changes in the line-up in the years before the band recorded its well-received 1977 debut, Rock City, and the story of Riot itself is one of tumultuous relationships, an ever-revolving roster of musicians, and an ‘underdog’ status, with band founder Reale remaining the one constant.

Rock critic and heavy metal historian Martin Popoff counts himself among the band’s loyal fans, and his latest literary project is Swords & Tequila, an album-by-album Riot biography that, provided its limited sales potential, is surely a labor of love on the behalf of the writer. Martin’s a buddy of mine – we’ve broken bread and drank more than a few beers together – and I have a lot of respect for his immense body of work, which includes better than four-dozen informative, insightful, and entertaining books on classic rock bands like Deep Purple, Thin Lizzy, and Black Sabbath, among many others (really, just check out the list on his website).


The founding editor of Brave Words, & Bloody Knuckles magazine, Popoff has forgotten more about hard rock and heavy metal than the Reverend will ever know, so I tend to follow his lead on bands like Riot that I’m unfamiliar with. Martin has chosen to focus the narrative of Swords & Tequila on “Riot’s classic first decade,” which covers the band’s first five studio albums and its short-lived major label tenure...their glory years, really. He constructs the book via interviews with band members and Riot’s longtime manager/producer/Svengali Steve Loeb as well as using archived materials, crafting the sympathetic story of a talented band that, for a myriad of reasons, never quite made it to the top.

The band’s story begins with the lead up to, and the making of Rock City, the 1977 album released by the band’s manager on his independent Fire Sign label. With the skilled, but lacking-in-confidence Speranza on the microphone, and featuring the underrated Reale’s explosive six-string talents, Riot was building a solid reputation in the mid-1970s by playing metallic hard rock in clubs around its NYC hometown. They would be signed to a dubious deal by Loeb and his partner Billy Arnell. As the story eventually unfolds, we’ll find that this was Riot’s first mistake, and rhythm guitarist Lou Kouvaris warned the band against signing the all-encompassing management/production deal with Loeb. 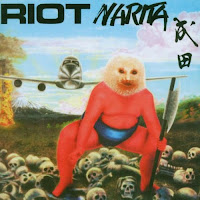 Rock City earned Riot a modicum of much-needed attention outside of Brooklyn, and opening slots playing in front of bands like Journey and Mahogany Rush expanded their fan-base outside of the five boroughs. In a lot of ways, however, Riot was swimming upstream against the current. In 1977-79, punk-rock ruled the roost and across town, CBGBs – with its regular fare of bands like the Ramones and the Dead Boys – was the Mecca of loud ‘n’ fast music. The band’s fortunes would lay overseas, with the fledgling “New Wave of British Heavy Metal” scene created by bands like Iron Maiden and Saxon, and their fans would embrace Riot as one of their own.

Riot’s Fire Down Under


Popoff delves into the major label politics behind the band’s two classic recordings – 1979’s Narita and 1981’s Fire Down Under – the former of which was (begrudgingly) released by Capitol Records, the latter by Elektra Records, both of which have subsequently grown in esteem since their release. Narita also sealed up the Japanese market for the hard-rocking quintet. Guitarist Rick Ventura had replaced Kouvaris (axed by management for insolence) for the recording of the album, which represented a major step in the evolution of the band’s proto-metal sound. Speranza’s vocals on the album are more confident, Reale’s fretwork more fluid and inventive. The band’s songwriting was solid, its performances heavier (staying apace of metal trends at the time), and Narita earned Riot important opening slots on a couple of major U.K. festivals. 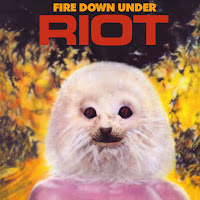 It would be with Fire Down Under that Riot would finally hit on (almost) all cylinders. Featuring a new rhythm section, but still fronted by the one-two punch that was Speranza and Reale, Riot created a minor heavy metal masterpiece that, although taking its cue from the NWOBHM, nevertheless spoke with an American accent, influencing a generation of bands to follow. Popoff explores the difficult birthing of the album, the band’s fractured relationship with its manager/producer, and the internal dynamics of the band that helped create Riot’s best-selling album. Riot’s modest fame, moderate LP sales, and several tours opening for headliners like Black Sabbath did little to improve their fortunes and, broke and dissatisfied, Speranza left the band in the wake of Fire Down Under.

Riot thought that they’d found the perfect replacement in singer Rhett Forrester. Whereas Speranza always seemed hesitant and sometimes timid on stage, the golden-maned Forrester was seemingly built in a lab to become a rock star. The band followed its acclaimed Fire Down Under with 1982’s Restless Breed, their first album with Forrester and its last for Elektra Records. The band’s sound changed somewhat with the addition of Forrester’s bluesy swagger and a lack of promotional support by the label and an inability to tour beyond a limited region would severely impact the band’s forward momentum. One more album with Forrester would follow – 1983’s Born In America – again produced by Loeb and licensed to a dance-music oriented Canadian label for North American release.


Riot basically imploded by 1985, with Forrester going on to an ill-fated solo career, and Reale moving to San Antonio, Texas, a town that had been very hospitable to the band during its career. This is the end of the band’s first decade, but Popoff doesn’t end the story here – as outlined in an Epilogue chapter, Reale re-created Riot with new musicians and, for a while, it seemed as if the band would rise, phoenix-like, from the ashes of its former incarnation. Riot’s 1988 major label album Thundersteel would re-establish the band as a significant force in American metal, in spite of Loeb’s smell all over the thing, and although a number of albums featuring different versions of Riot would be released well into the 2000s, it was all mostly downhill from Thundersteel. 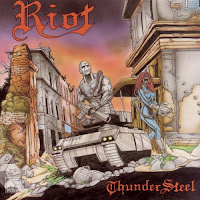 So why did a talented, innovative band like Riot run off the rails, ending up so far from its goals? Popoff doesn’t offer any judgments, content to merely outline the story and allowing the various parties, including Steve Loeb, to have their (sometimes conflicting) say on the band’s history. In my mind, Riot’s biggest problem was Loeb, whose protestations of sacrifice on behalf of the band ring hollow and read as self-serving revisionism. It’s always a bad idea for a band to hook up with a single person for management and production, and Loeb’s lack of imagination in the studio definitely held the band back creatively. Loeb’s inability to provide the band members a living wage is, sadly, a recurring issue, one that undoubtedly caused more turmoil in the ranks than was necessary.

Mark Reale’s continued devotion to Loeb, even after the band broke-up and re-formed three years later, was self-sabotaging. Loeb seems to have alienated nearly every powerful music biz mover ‘n’ shaker with his antics through the years, and his production deal with the band created a bad situation where he leased their recordings to whoever would have them instead getting them signed to an established label. And what’s up with those horrible Riot album covers? I understand that Loeb was going for a marketable theme with the band’s recognizable, seal-headed mascot (which Martin lets us know is named ‘Mighty Tior’). But all the LP covers accomplished was to make the albums look cut-rate and amateurish…and how in the hell did the suits at Elektra ever sign off on such god-awful LP jackets as those that adorned Fire Down Under and Restless Breed?


Popoff’s Swords & Tequila accomplishes what the author set out to do – it tells the very human tale of a rock ‘n’ roll band that tried and failed. Riot failed not because of its own missteps, or because of any lack of talent, but rather because the music business is a brutal, savage undertaking that often eats artists alive, grinds them up, and spits them out into the gutter if they don’t live up to (sales) expectations. By capturing the oral history of Riot as told by the people who were there, Popoff gets as close to the heart of the matter as is journalistically possible, and the format of Swords & Tequila – with the band’s story framed album by album – provides a lot of meat for Riot fans to chew on.

As mentioned above, Swords & Tequila is a labor of love on the part of Martin Popoff, and he writes about these relatively obscure, albeit important bands like Riot because few other music historians of his stature deem them worthy of an investment of time and effort. Riot was an ill-fated outfit (three of its core members – Speranza, Reale, and Forrester – have all passed away too young), but Reale’s vision of for Riot lives on with his most recent band members continuing under the name Riot V after the guitarist’s 2012 death. Riot’s legacy, as it exists, will only be enhanced by Popoff’s biographical effort; the band’s still-growing reputation built one hard-fought album at a time. Grade: A (Power Chord Books, November 2015)

Get Swords & Tequila from www.martinpopoff.com