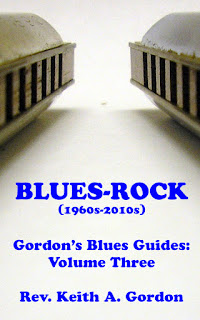 Some of you know, but a lot of you might not, but the Reverend loves the blues. Your humble music critic and historian has been enamored of the blues since I was a wee teen spinning Furry Lewis sides on a portable turntable. I've covered the blues for most of the 44 years that I've been writing about music, and spent 6 1/2 years as the "Blues Guide" for About.com as well as contributing to The Blues magazine in the U.K. and Blues Music magazine here in the states.

Along the way, I've learned a lot about the blues, and I've put that knowledge to good use, creating three of these Gordon's Blues Guides eBooks for new and veteran fans alike to get more info on the key artists in their respective blues styles. All of the Reverend's eBooks are available for the Kindle from Amazon.com as well as from iTunes and Barnes & Noble's Nook store (if you look for 'em).

With the publication of Blues-Rock, the Rev's third book in the series (watch for a contemporary blues guide in 2016!), we thought it only fair that we recap the series with a list of all of the Rev's eBooks in the hopes that we can convince you to lay down some hard coin on one or more of these entertaining, educational tomes (links in titles to Amazon.com Kindle store):

Blues-Rock: Gordon's Blues Guides, Volume Three
Blues-Rock (1960s-2010s) is the third volume of Gordon's Blues Guides, a concise and informative primer on this popular sub-genre of the blues, from its formation in the early 1960s through the present day. The guide provides a brief history of early blues-rock bands along with a list of key artists with biographies and recommended recordings. (165pp, $3.49)

Chicago Blues: Gordon's Blues Guides, Volume Two
Chicago Blues (1940s-1960s) is the second volume of Gordon's Blues Guides, a quick and easy primer on the Chicago blues style from the 1940s through the 1960s. The guide provides a brief history of the early days of the city's blues scene, a list of key artists with biographies, and recommended recordings as well as an overview of Chicago-based record labels and a "blues glossary." (78pp, $2.99) 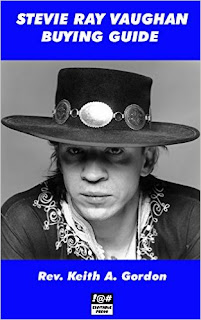 Stevie Ray Vaughan Buying Guide
The Stevie Ray Vaughan Buying Guide is an illustrated, album by album overview of the Rock & Roll Hall of Fame guitarist’s too-brief career including a condensed artist biography, a discography with complete song listings, and even a select discography of bootleg albums, all compiled by the Rev. Keith A. Gordon, former About.com Blues Guide. As a bonus, the Reverend also includes his reviews of several of Vaughan's albums, including the seminal Texas Flood and In Session, with blues legend Albert King. (94pp, $2.99)

Frank Zappa Buying Guide
During his lifetime and a musical career that spanned five decades, Frank Zappa released almost 60 albums of rock, jazz-rock, and classical music. The Frank Zappa Buying Guide is an album by album guide to navigating the often daunting Zappa catalog, with color cover photos for each album, as well as descriptions, band history, and much more for the Zappa fan or newcomer alike. (92pp, $2.99)