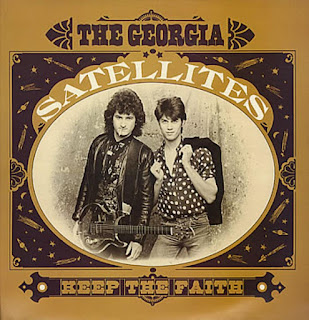 C'mon now, be truthful…has your Uncle Keith ever turned ya the wrong way? Ever given ya a bum steer? Naw…so listen up boys and girls: run, don't walk, down to your local import bin and lay down yer hard earned coin on a copy of the Georgia Satellites' Keep The Faith EP. Why? 'cause the Georgia Satellites are the hottest, hungriest, honest-to-god blooze singing, rock 'n' roll playing dedicated fools to come down the road in many a mile…and Keep The Faith is their one-and-only recording, containing half a hot dozen barn-burnin', leg-wettin' toons that would even knock yer dear ol' sainted Granny outta her rockin' chair and onto the dance floor!

It's a shame that some of America's finest bands such as the Satellites have to go to England to make a record, but it's lucky for us they did! Keep The Faith moves from zero to sixty miles per hour in the time it takes to drop the needle in these nasty little grooves. From the opening bars of "Tell My Fortune," a tasty AOR rocker, through the two-fisted, six-string madness of "Red Light," to the battle of the sexes on "Keep Your Hands To Yourself," to the mini-album's lone cover, George Jones' classic "The Race Is On," and all the songs in between, Keep The Faith is a swamp-licking, roots-inspired hellbroth of a rock 'n' roll album, a nuclear-tipped aural missile fired at your sensory circuits like sharks on a feeding frenzy. Closer akin to the early Stones, the Faces, and the art of Chuck Berry, the Georgia Satellites have drunk from the well from which rock 'n' roll sprang some 30 years ago… (Making Waves Records)