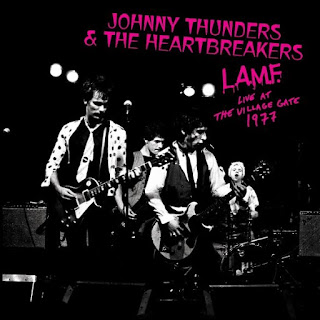 Johnny Thunders was one of rock ‘n’ roll’s great tragedies, an enfant terrible who, while not dying particularly young (he was 38), nevertheless seemingly left this mortal vale before fulfilling whatever promise Fate had in store for the tortured guitarist. Thunders made his bones as part of cult rockers the New York Dolls, his raw, slash ‘n’ burn six-string technique putting him in a rarified class with the Kinks’ Dave Davies and inspiring a generation of young soul rebels in his wake. Two criminally-underrated Dolls albums were all that the band could muster before going supernova, and Thunders went on to create a productive, if sporadic and often times maddening solo career.

In between the 1975 break-up of the Dolls and the release of his acclaimed 1978 solo album So Alone, Thunders took another shot at the brass ring with his band the Heartbreakers. Formed with New York Dolls bandmate Jerry Nolan, the Heartbreakers included ex-Television bassist Richard Hell, and later added a second guitarist in the talented Walter Lure. A clash of egos soon flared up between Thunders and Hell, who both thought that the Heartbreakers was their band, and Hell left to form the Voidoids, replaced by Billy Rath. This is the version of the Heartbreakers that released their lone classic album, L.A.M.F., in 1977 in the heart of the punk rock explosion. A year or three ahead of its time, L.A.M.F. did little or nothing in the way of sales, and Thunders broke up the band in favor of a solo career.


The importance and popularity of L.A.M.F. has only grown since its ill-fated release, dragging Thunders and the Heartbreakers along for the ride. Since Thunders’ death in ’91, dozens of live and bootleg albums of dodgy provenance have been released under both Thunders’ and the Heartbreakers’ names. One live set that had never been released, even semi-legitimately, is the Heartbreakers’ August 1977 shows from the Village Gate in New York City. Cleopatra Records, which is rapidly making a name for itself as an archival label, got a hold of the tapes and has released L.A.M.F. Live At The Village Gate 1977. Drawing performances from two electrifying Heartbreakers’ shows that Walter Lure considers the best the band ever played, L.A.M.F. Live includes guest appearances from former New York Dolls guitarist Sylvain Sylvain and rockabilly rebel Robert Gordon.

First, a warning – the sound quality on L.A.M.F. Live sucks worse than a politician at a fundraising dinner. Back when the Reverend was reviewing bootleg CDs for an outlaw music zine in Missouri, we’d have called this an “audience recording,” which sounds every bit as bad as it reads. Hollow, cavernous, echoed, with solar flares of feedback at times rendering the listener mute, none of it really matters when the band kicks into high gear with a frenzied, steroidal performance of the Ramones’ “Chinese Rock.” It’s like standing in the back of the club and letting the sonic waves wash over your fractured cerebellum. If live Heartbreakers doesn’t get your medulla oblongata to stand up on its hind legs and do tricks, then turn up the amp…and if that doesn’t work, schedule your lobotomy.

Overall, Lure is right in that L.A.M.F. Live captures a high-energy performance by a band hitting on all cylinders, playing eight of the twelve original tunes from the studio album, the sound slam-dancing off one wall and bouncing hard against the other. The riotous “Get Off The Phone” hits your ears like a tsunami, leaving nothing but destruction in its wake, while the cacophonic “One Track Mind” takes Phil Spector’s “wall of sound” production technique to the extreme, the instruments constructing an impenetrable, distorted sonic sludge from which only shouted vocals and piercing guitar licks can escape. A cover of the Dolls’ “Chatterbox” is loud, chaotic, and a rowdy lot of fun while the Carl Perkins’ rockabilly gem “Boppin’ The Blues,” featuring a chicken-pickin’ Sylvain and singer Gordon, is a sloppy, greasy, drunken bacchanal. The Heartbreakers’ theme song, “Born To Lose,” is a runaway freight-train teetering down the tracks to nowheresville.


Atrocious, bootleg sound quality notwithstanding, Johnny Thunders & the Heartbreakers put on a helluva party with L.A.M.F. Live At The Village Gate 1977. The guitars cut like a switchblade, and the rhythm players raise a ruckus like a thunderstorm. There’s nothing virtuoso or cautious about the performances captured on L.A.M.F. Live – this is raw, visceral rock ‘n’ roll played from the gut by guys that have nothing to lose, so why not make a joyful noise on your way out? Highly recommended for Johnny Thunders fans, or fans of the New York Dolls, or even youngsters who cut their teeth on bands like the Streetwalkin’ Cheetahs or New Bomb Turks. L.A.M.F. Live will scratch the punk-rock itch you didn’t know you had… Grade: B- (Cleopatra Records, released October 16, 2015)

Buy the CD from Amazon.com: Johnny Thunders & the Heartbreakers' L.A.M.F. Live at the Village Gate 1977