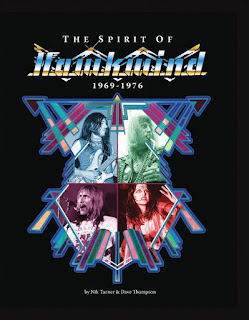 If you’re of a similar vintage to the Reverend, then British space-rock pioneers Hawkwind probably hold a special place in your heart. The band’s early ‘70s albums like In Search of Space and Space Ritual were mind-blowing, consciousness-expanding experiences for many young rock ‘n’ roll fans on both sides of the Atlantic.

Singer, songwriter, and multi-instrumentalist Nik Turner has enjoyed a lengthy solo career exploring the outer limits of rock music, but he was also an early and essential member of Hawkwind, contributing to seven of the band’s albums during the decade of the 1970s. Turner has documented these anarchic, chaotic early years in the pages of The Spirit of Hawkwind 1969-1976, a beautiful deluxe hardback book that was published on October 30th, 2015.

Written with music historian Dave Thompson, Turner provides readers with an inside look at the band, from the drug bust of original band bassist Lemmy K to the band’s notorious Glastonbury Festival appearance. The book runs 300 pages and includes an enormous number of rare and never-before-seen photos as well as a comprehensive Hawkwind discography (no mean feat, considering their various side projects, single releases and such), a complete list of band gigs, an a reproduction of Turner’s tour diary from the band’s first U.S. tour in 1975. 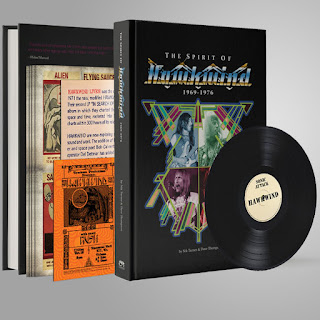 The deluxe tome also includes a reproduction of the band’s 1971 single “Sonic Attack,” and a reproduction of a 1971 twenty-page 6”x9” promotional booklet. The Spirit of Hawkwind 1969-1976 ain’t cheap – the Cleopatra Records website is selling it for around $60 – but it’s also a unique piece of Hawkwind memorabilia.

Turner will be touring the U.S. beginning in November in support of his new album Space Fusion Odyssey, performing songs from the rich and deep Hawkwind catalog. The book will be available at the merch table, and Turner will be signing copies of The Spirit of Hawkwind at the shows, which we’ve conveniently listed below.