Real Gone serves up Doug Sahm and Band on vinyl! 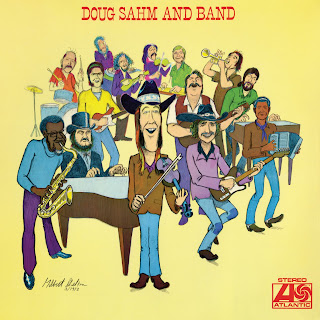 By the time he released his solo debut album in 1972, roots-rock pioneer Doug Sahm had already made a name for himself with his acclaimed 1960s-era band the Sir Douglas Quintet. Sahm could count legends like Bob Dylan among his fans, and roots ‘n’ blues artists like Dave Alvin, Steve Earle, and Delbert McClinton, among many others have cited Sahm’s influence on his own music. As such, when Sahm signed with Atlantic Records to record his debut album for the label, the studio was crowded with luminaries like Dylan, Dr. John, David Bromberg, and Flaco Jiménez along with his longtime bandmates Augie Meyers (keyboards) and Jack Barber (bass).

On February 5th, 2016 the good folks at Real Gone Music will reissue Doug Sahm and Band on glorious vinyl in a limited edition of 1,000 gold wax copies of this bona fide classic of American music. Produced by Atlantic’s Jerry Wexler and Arif Mardin, the album offers a dozen songs featuring Sahm’s visionary musical blend of rock ‘n’ roll, blues, country, and Tejano influences. Sahm only wrote three of the dozen songs on Doug Sahm and Band, but his choice in cover tunes is impeccable, and whether he’s singing Dylan (who contributed a new song, “Wallflower,” for the album), Willie Nelson (“Me and Paul”), T-Bone Walker (“Papa Aint’ Salty”), or country gems like Dave Kirby’s classic “(Is Anybody Going To) San Antone,” Sahm grabs each performance and makes it entirely his own.

In spite of the talented guest musicians and the overall hype surrounding the album, Doug Sahm and Band would rise to only #125 on the Billboard magazine chart, representing the highest chart position in Sahm’s lengthy solo career (even higher than his band the Texas Tornadoes 1990s-era country hits). Although Sahm’s debut enjoyed lukewarm critical response upon release, it has since grown in critical estimation and is today considered a legit and influential Americana classic...and it sounds great on vinyl!