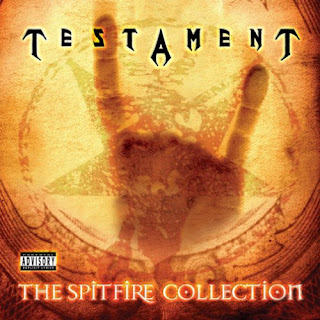 One of the most influential and enduring bands in heavy metal, Testament may not be as well-known as Anthrax, as controversial as Slayer, or as commercially-successful as Metallica. Due to the band member’s instrumental virtuosity and the band’s unique blend of technical proficiency, raw power and thinly-veiled lyrical malevolence, however, Testament’s original brand of thrash-metal has withstood the test of time.

Originally forming in San Francisco in 1983 as “Legacy,” the band’s earliest line-up included vocalist Steve Souza, guitarist Eric Peterson, bassist Greg Christian, and drummer Louie Clemente. It was with the addition of lead guitarist Alex Skolnik two years later that the band changed its name to Testament and rapidly became one of the top names in a local metal scene dominated by Metallica.

With several major labels sniffing around the Bay Area for thrash bands in the wake of Metallica’s success with their Ride The Lightning and Master of Puppets albums, Testament was receiving their share of label attention when Souza left the band to form Exodus. The loss, although significant at first, proved to be beneficial when the band recruited vocalist Chuck Billy to take over the lead position. Billy’s dark-hued vocals and wider melodic range paired well with the band’s instrumental prowess and the table was set for Testament’s future.


With Billy at the mike, Testament signed with Megaforce Records, the indie label already a well-known brand in heavy metal households. The band released its powerhouse debut, The Legacy, in 1987, the album’s fortunes benefiting from Megaforce’s recent distribution deal with Atlantic. The album shook up the metal hierarchy; The Legacy was deemed an overnight classic and Testament found themselves thrust into the upper stratosphere of thrash-metal, rarified heights that included hometown rivals Metallica, Anthrax, Slayer, and Megadeth.

Testament followed their debut with an equally-powerful offering, The New Order, in 1987, and would subsequently record a couple more albums for Megaforce before the label was absorbed by Atlantic altogether. By the time of the band’s fifth album, 1992’s The Ritual, Testament had been on the verge of Platinum™ sales level stardom for a half-decade. The rigors of constant touring and borderline superstardom took its toll, and when the otherwise solid album was overlooked in favor of grunge bands like Nirvana and Soundgarden, Testament began to fall apart. Guitarist extraordinaire Skolnik was the first defection, leading to a revolving door of various members circling around mainstays Chuck Billy and Eric Peterson.

The band soldiered on during the difficult ‘90s, recording albums both bad (Return To the Apocalyptic City is pretty dodgy) and extremely good (Demonic is industrial-strength scary). Testament signed with notable hard rock/metal label Spitfire at the end of the century, and the band’s best-known and beloved line-up (Billy, Skolnik, Peterson, Christian, and Clemente) even reunited for a lengthy world tour in 2005, reasserting the Testament brand name in heavy metal for years to come.

All of which brings us, in a roundabout way, to The Spitfire Collection, a heady fourteen-song compilation that documents Testament’s tenure with Spitfire Records. After the band signed with the label in 1999, Spitfire reissued albums such as Live At the Fillmore and Demonic that Testament had previously released independently. Along with newer albums such as The Gathering, Spitfire has amassed a large chunk of the Testament catalog, easily enough material to assemble a top-notch collection.


True believers will not be disappointed by The Spitfire Collection. The album kicks off with a trio of red-hot tracks culled from Live At the Fillmore, an overlooked gem in the Testament catalog in this humble scribe’s opinion. Although Skolnick had been gone for a couple of years by the time of the album’s original 1995 release, metal journeyman James Murphy (Death, Obituary) picks up most of the slack on scorched-earth jams like “The New Order,” “Souls Of Black” and “Practice What You Preach.” The choice of three vintage live tracks to kick off this comp was sheer genius on somebody’s part.

From Live At the Fillmore, the collection jumps to a flurry of cuts from 1997’s Demonic, including the truly HEAVY “John Doe” and the equally-frightening “Hatreds Rise.” With Demonic the band had pursued a heavier sound that bordered on the industrial darkness of Ministry or My Life With The Thrill Kill Kult, only with chainsaw guitars replacing any wimpy dancefloor rhythms. The album retained all of the thrashy goodness that fans had come to expect from Testament, however, piling on layer-after-layer of threatening vocals and heavy riffing.

Three takes from 1999’s The Gathering come next, building upon Demonic’s newfound aggression with an even greater sense of insane urgency. With Chuck Billy’s extreme vocals, chaotic slashing guitar interplay between Peterson and Murphy, and tribal drumwork courtesy of Slayer skinman Dave Lombardo, much of The Gathering sounds like a cross between Norwegian death metal and Killing Joke’s worst nightmares.

For 2001’s First Strike Still Deadly, the band ventured into the studio with former members Souza, Skolnik, and drummer John Tempestra to re-record a disc’s worth of the band’s best songs. The gimmick received lukewarm response from the fans, and a fair degree of venom from critics, cuts like the driving “Over The Wall” and “The Preacher,” while benefiting from better production, nevertheless not adding anything essential to the original versions of the songs. The Spitfire Collection tops off with three songs from Live In London, the aforementioned reunion of the band’s classic line-up throwing out caustic live versions of ‘80s-era songs like “Into The Pit” and “Trial By Fire.”


And there you have it…The Spitfire Collection in a nutshell or two. The album does a fine job of documenting Testament’s later years, collecting material from each of the band’s vital works over the last decade onto a single disc. The chosen material also does a strong job of displaying the talents of the individual bandmembers: Chuck Billy’s awe-inspiring metallic vocals, Eric Peterson’s rock-solid riff-and-rhythm-fretwork and, on the few modern-era tracks that he appears, Alex Skolnick’s fluid, still-shocking-and-shockingly-electric leads.

Sure, rabid fans already have all of this stuff on other discs, but The Spitfire Collection provides an intriguing introductory sampler for young metalheads to discover this legendary band. It also includes some of the band’s better recent material on a single easy-listening disc. What more could you ask for? (Spitfire Records, released March 13, 2007)

Review originally published on the Trademark of Quality music blog

Buy the CD from Amazon.com: Testament’s The Spitfire Collection
Posted by Rev. Keith A. Gordon at Saturday, October 28, 2017