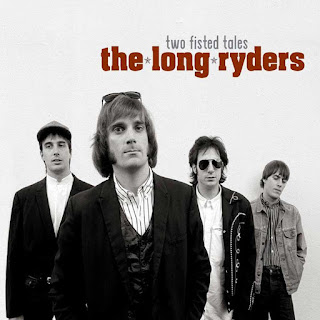 The Long Ryders were another of those great “lost” bands of the 1980s, fellow travelers to outfits like Dream Syndicate, Rain Parade, Stealin’ Horses, and Jason & the Scorchers, among others, a band that never received its due in spite of a brace of innovative and entertaining albums that blended punk rock intensity with the “cosmic cowboy” roots-rock of influences like Gram Parsons, Buffalo Springfield, Bob Dylan, and the Byrds. Formed in Los Angeles in 1982, and widely labeled part of the “Paisley Underground” movement, the Long Ryders featured guitarists Sid Griffin and Stephen McCarthy, bassist Tom Stevens, and drummer Greg Sowders with vocals provided by all the band members.

The Long Ryders’ third and final album, 1987’s awesome, critically-acclaimed Two Fisted Tales, was tragically ignored by a record-buying public buying into the “nerf metal” din of less-talented bands. It remains Griffin’s favorite album by the Ryders, and in addition to great original songs like “Gunslinger Man,” “Prairie Fire,” and “Harriet Tubman’s Gonna Carry Me Home” the album also included a wonderful cover of NRBQ’s classic “I Want You Bad.”

On November 30, 2018 British archival label Cherry Red Records will reissue Two Fisted Tales as a three-CD box set. With production overseen by the band’s Tom Stevens, the set includes the re-mastered original album with three bonus tracks, a second disc of demos from the band’s archives, and a third disc featuring a memorable live show from Palm Springs.

The Two Fisted Tales box set includes a new booklet with rare, unpublished photos and memorabilia and new liner notes by Griffin. The box set precedes a brand-new Long Ryders studio album scheduled to be released in 2019 by Cherry Red in the U.K. and the good folks at Omnivore Recordings stateside. If you’re a fan of contemporary roots-rock bands like the National, American Aquarium, or Beachwood Sparks, you owe it to yourself to rediscover the Long Ryders, one of the influential and innovative pioneering bands that helped launch the Americana movement.

Check out the album on the Cherry Red website
Posted by Rev. Keith A. Gordon at Sunday, October 07, 2018