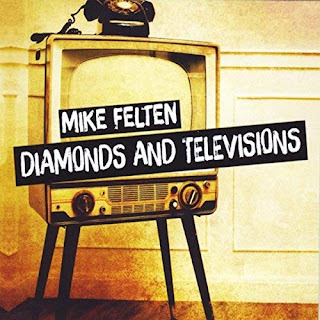 Mike Felten – Diamonds and Televisions (Landfill Records)
I almost overlooked this one, a new(ish) album by my old buddy Mike Felten. Mike owned a Chicago record store for 30+ years and he absorbed a heck of a lot of music over that time. As such, Diamonds and Televisions is an electrifying collection of blues, rock, and folk sounds that perfectly scratches your itch, if you catch my meaning. It’s no surprise – Felten has been playing guitar and writing songs since he was a teen, and he’s honed his talents to a sharp edge over the course of several albums. Backed by a full band, Felten’s songs like the working-class blues of “Seven Days A Week,” the imaginative “Pa Kettle’s Bastard Son,” or the Dylanesque story-song “Statue of Liberty” showcase intelligent lyricism and exhilarating instrumentation. Diamonds and Televisions places Felten at the crossroads standing alongside fellow outsiders like Tom Waits and Mike Doughty, and that’s good company, indeed. Grade: A   BUY! 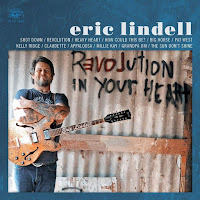 Eric Lindell – Revolution In Your Heart (Alligator Records)
New Orleans-based blues guitarist Eric Lindell has been making great music for over a decade, at least since 2006’s Change In The Weather. The sublimely wonderful Revolution In Your Heart marks his return to Alligator Records, the label where he made three underappreciated albums during the late ‘00s. Recording in his Louisiana backyard, Lindell infuses a dozen original tracks with a subtle, laid-back, New Orleans vibe, effortlessly blending blues, funk, soul, and Southern rock into a heady musical brew. A superb lyrist and vocalist, Lindell loads songs like the hopeful title track or ‘70s-era soul throwback “Heavy Heart” with plenty of emotion, but it’s his nuanced fretwork that shines through every song. “Big Horse,” for instance, is a psych-drenched rave-up with swirls of Jimi-influenced guitar while the wistful reminiscences of “Pat West” are accompanied by jazzy licks. A talented artist worthy of greater acclaim, Eric Lindell is ready for prime-time. Grade: A   BUY! 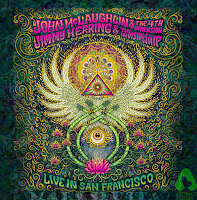 John McLaughlin & Jimmy Herring – Live In San Francisco (Abstract Logix)
Pioneering jazz-fusion guitarist John McLaughlin’s legacy is carved in granite, if only for his ground-breaking work with Miles Davis or the influential Mahavishnu Orchestra. Hooking up with talented guitarist Jimmy Herring and members of the 4th Dimension and the Invisible Whip bands, McLaughlin took a final spin across the states during 2017. Live In San Francisco documents the final concert of this ‘farewell tour’ and to say that the performance is breathtaking would be an understatement. McLaughlin’s guitar chops are as sharp as they were 50 years ago, and this collection of prog-leaning jazz-fusion instrumentals is stunning, the backing musicians displaying an uncanny chemistry and easily falling in lockstep with the guitarist’s immense imagination. The ‘70s-era Mahavishnu material is timeless, and McLaughlin seemingly hasn’t lost a step through the years. His crystalline playing of these legendary songs will appeal to fans of any era of McLaughlin’s lengthy and acclaimed career. Grade: A   BUY! 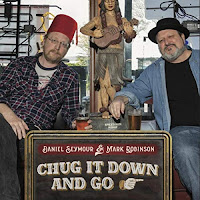 Daniel Seymour & Mark Robinson – Chug It Down and Go (Blind Chihuahua Records)
Nashville guitarist Mark Robinson has a pair of critically-acclaimed electric blues studio albums – Quit Your Job, Play Guitar and Have Axe - Will Groove – to his credit along with a rowdy live LP that any blues fan should have on their shelf. Hooking up with fellow multi-instrumentalist Daniel Seymour, Robinson performs a breakneck stylistic U-turn with the acoustic Chug It Down and Go. Talent always shines through and Robinson and Seymour deliver a high-spirited, energetic, and entertaining collection of original songs with deep roots. While Seymour’s material skews towards old-timey jug band-sounding fare like the lovely “Barefoot Gal” (with David Olney on harmonica) and the spry instrumental “19th Street Ramble,” Robinson dabbles in Zydeco (“One Eye Blue”), antique jazz (“Gypsy Moon”), and Piedmont blues (“Take Me Down the Road”). It’s all quite clever and exceptionally well-performed, Chug It Down and Go a truly magical collaboration between two skilled and passionate music-makers. Grade: A   BUY! 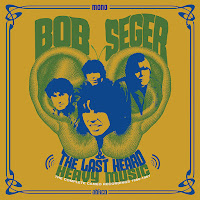 Bob Seger & the Last Heard – Heavy Music (Abkco Records)
Bob Seger & the Last Heard were one of the legendary singer’s earliest bands. Signed to the Cameo-Parkway label, they released five singles, ten songs total circa 1966-67, all of which are collected on CD for the first time with Heavy Music. An artist in search of a sound (hint: he’d glimpse it a couple years later with “Ramblin’ Gamblin’ Man”), Seger checks several then-contemporary cultural boxes with these long out-of-print 45s – James Brown (“Sock It To Me Santa”), Bob Dylan (“Persecution Smith”), psych-rock (“Vagrant Winter”), the Beach Boys (“Florida Time”), and AM-radio pop balladry (“Very Few”) – as well as the timeless, bluesy title track and the stunning regional hit “East Side Story,” both of which open a window to Seger’s 1970s-era success. There are only ten tracks on Heavy Music, but each one is a slab of raw, energetic, prime-grade rock ‘n’ roll from the early Motor City scene. Grade: A-   BUY! 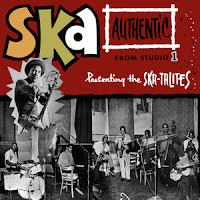 Various Artists – Ska Authentic (Studio One)
Released nearly 55 years ago, Studio One’s wonderful Ska Authentic provides a snapshot of Jamaica’s homegrown music scene in the early 1960s, preserving long-lost tracks by legends like the Skatalites, Toots & the Maytals, and Lee “Scratch” Perry. While some performances, like Perry’s rollicking “Mother In Law” or the Maytals’ “Heaven Declare,” offer glimpses of the artist’s future genius others, like Delroy Wilson’s “Sammy Dead,” were throwaway singles with plenty of soul. Echoing the American R&B heard on transistor radios in Jamaica circa 1955-65, these songs are dance-oriented with foot-shuffling rhythms with blasts of soulful horns. The horns would eventually be replaced by amplified guitars and the rhythms would develop a harder edge as the style evolved into what we now know as reggae. Studio One’s Ska Authentic captures the island’s sounds with all their fresh naiveté and energy, taking the listener back in time to a more innocent age. Grade: A   BUY!