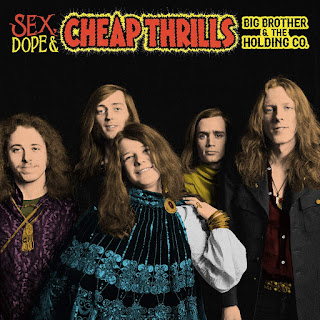 Legendary rock ‘n’ blues vocalist Janis Joplin was only with Big Brother & the Holding Company for a short while – a little more than two years between 1966 and ‘68 – but she had already begun forging a legend that endures to this day. Joplin would be fondly remembered by classic rock fans if only for her explosive performance on Big Brother’s classic Cheap Thrills album. That Joplin only released one solo album, 1969’s I Got Dem Ol’ Kozmic Blues Again Mama!, before her tragic death in 1970 only ensured her notoriety (Joplin’s classic Pearl was released posthumously).

Unlike contemporaries such as Jimi Hendrix and Jim Morrison of the Doors, whose estates have turned the late artists’ work into profitable cottage industries, there’s not a heck of a lot of posthumous Janis Joplin material extant. There are the couple of Big Brother LPs she recorded with the band, her two solo efforts, three or four live performances, and a cash-grabbing myriad of “greatest hits” compilation albums. On November 30th, 2018 Legacy Recordings will celebrate the 50th anniversary of Cheap Thrills with the release of Sex, Dope and Cheap Thrills. The album will be available as a two-disc CD featuring 30 rare performances, including 25 previously-unreleased songs, culled from the 1968 Cheap Thrills sessions, while a two-LP vinyl version will feature 16 songs.

Sex, Dope and Cheap Thrills was purportedly the album’s original title, considered too controversial in 1968 by the label, which shortened it to the now-familiar moniker. The new set rescues 29 studio outtakes, as well as a previously-unreleased performance of “Ball and Chain” recorded live at the Winterland Ballroom in April 1968. Alternative versions of classic Joplin performances on songs like “Summertime,” “Piece of My Heart,” and “Combination of the Two” are centerpieces of the new set, which also includes liner notes by Big Brother drummer Dave Getz and Jefferson Airplane vocalist (and friend of Janis) Grace Slick.

“Cheap Thrills seems to have stood the test of time,” writes Dave Getz in his notes for Sex, Dope & Cheap Thrills. “It might be because it is arguably the greatest work by a great artist, Janis Joplin. It is certainly the greatest and closest representation of what Big Brother & The Holding Company was as a band and I would add to that argument that Big Brother/Janis as a band, and as a SOUND, was the embodiment of the San Francisco, psychedelic, counter-culture of the 1960s…on another, more metaphorical level and in the perspective created by the distance of fifty years, I see Cheap Thrills as a time capsule for the year 1968. That year might have been the moment when it all came to a boil for Big Brother, Janis and the entire 1960s, acid-infused, revved-to-the-max, counter-culture generation.”