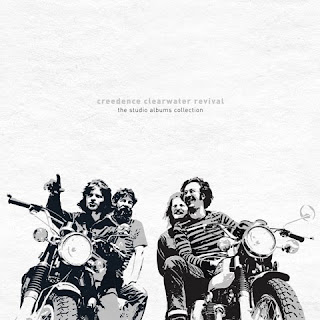 Creedence Clearwater Revival had a well-earned reputation as a rock ‘n’ roll jukebox, a singles band that chalked up nine Top 10 hits in the space of four years circa 1968-72 with songs like “Proud Mary,” “Bad Moon Rising,” “Down On the Corner,” and “Travelin’ Band.” One of their earliest singles – CCR’s cover of the Dale Hawkins’ classic “Suzie Q” – barely missed the mark, peaking at #11 on the Billboard Hot 100, and they also had a few other high-charting singles to cement their reputation as radio-ready rockers.

What a lot of people have forgotten, or overlooked, is that CCR was also a damn impressive album band as well. Fronted by singer, songwriter, and guitarist John Fogerty and including rhythm guitarist Tom Fogerty (John’s brother), bassist Stu Cook, and drummer Doug Clifford the band released seven classic studio albums during its tenure, including three in 1969 alone. The music just seemed to pour out of Fogerty and crew, and the bourgeoning FM radio band lapped up these albums like a hobo with a bottle of ripple. Five of CCR’s studio albums charted Top 10, the sixth peaked at #12, and six of ‘em were eventually awarded Platinum album sales status, with their masterpiece, Cosmo’s Factory, moving over 4,000,000 copies.

That’s a heady legacy, indeed, so in honor of the 50th anniversary of the band, on November 30th, 2018 Craft Recordings will be releasing Creedence Clearwater Revival’s Complete Studio Albums box set. The seven-LP set features the entire CCR studio catalog – their self-titled 1968 debut; 1969’s Bayou Country, Green River, and Willy and the Poor Boys; 1970’s Cosmo’s Factory and Pendulum; and 1972’s swansong, Mardi Gras. Each album is pressed on 180-gram vinyl and has been mastered at half-speed at Abbey Road Studios to create an “exceptional level of sonic clarity” and vibrancy. Each LP comes in a tip-on jacket that replicated the original album sleeves, and the box set includes an 80-page book featuring new liner notes by music journalist Roy Trakin along with archive photos and memorabilia.

The set is pricey even as these things go, running roughly $250 on Amazon, which averages out to better than $35 an album…definitely not for the faint of heart or low of budget. Clean copies of most of CCR’s albums can be had for less than half of that, so this is another label archival set targeting well-heeled fans with plenty of disposable income. Will the new pressings sound better than the originals? Maybe…but me, I’ll be happy with my beat-up old CCR vinyl and ten-year-old CD reissues.