Return of Chris D and the Flesh Eaters! 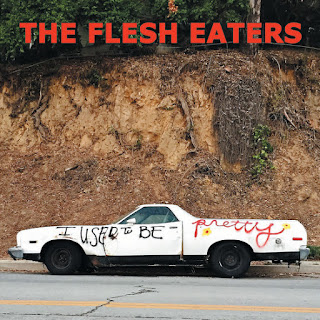 The Flesh Eaters were one of the fiercest and most sophisticated of the 1980s-era punk-rock outfits. Formed in Los Angeles, California in 1977 and featuring the poetic songwriting of band frontman Chris Desjardins (i.e. ‘Chris D’), the Flesh Eaters line-up was a revolving door of talented musicians from better-known L.A. bands like X, the Blasters, and Los Lobos. During the four decades since their founding, the Flesh Eaters have released roughly a dozen studio and live albums, from 1980’s bona fide classic No Questions Asked to their most recent effort, 2004’s Miss Muerte, recording for a slate of indie labels including SST Records, Enigma Records, and Desjardin’s own Upsetter Records imprint.

Fifteen years after the release of the band’s last album, the Flesh Eaters are back, baby! On January 18th, 2019 Yep Roc Records will release an all-new collection of songs titled I Used To Be Pretty. Chris D. is backed on the new album by what many consider to be the “classic” Flesh Eaters line-up that recorded 1981’s A Minute To Pray, A Second to Die – guitarist Dave Alvin and drummer Bill Bateman of the Blasters, bassist John Doe and percussionist D.J. Bonebrake of X, and saxophonist Steve Berlin of Los Lobos (and punk legends the Plugz).

The Flesh Eaters’ I Used To Be Pretty was produced collectively by the band members and also features singer Julie Christensen, from Desjardin’s other legendary band, Divine Horseman, on five of the album’s eleven songs. Six tracks on I Used To Be Pretty are reinterpretations of previously-released Flesh Eaters songs, including “Pony Dress” from the 1970 compilation Tooth and Nail; “My Life to Live” and “The Wedding Dice” from 1982’s Forever Came Today; “Youngest Profession” from 1991’s Dragstrip Riot; “House Amid the Thickets” from 1999’s Ashes of Time, and the title track from Miss Muerte.

The album also features three inspired covers including a psych-drenched reading of the Peter Green-led Fleetwood Mac’s “The Green Manalishi,” a raucous take on “Cinderella,” originally by garage-rock legends the Sonics, and a cover of the Gun Club’s “She’s Like Heroin to Me,” taken from that band’s Desjardins-produced album Fire of Love. In a press release for the new album, Chris D. says “some of Jeffrey’s songs could have been Flesh Eaters songs so easily. Some of his phrasing and his lyric images I really feel a kinship with.”

I Used To Be Pretty will be released on CD and as a double-LP vinyl version, and the band will launch a short tour to bring their music to fans outside of the West Coast (tour dates listed below). Quoted in the aforementioned press release for the new album, band member Dave Alvin states “it’s six old friends who rarely get to see each other or play music together and decided to make an album while we’re all still alive.”

Buy the CD from Amazon.com: The Flesh Eaters’ I Used To Be Pretty

* with special guests Mudhoney
Posted by Rev. Keith A. Gordon at Sunday, October 28, 2018