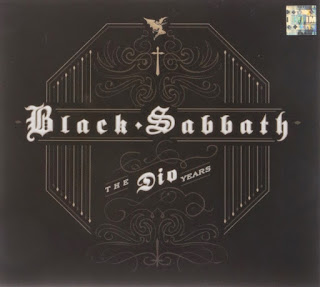 Few bands in the history of rock & roll have exerted the kind of long-lasting musical influence that has been enjoyed by Black Sabbath. The Beatles, certainly, continue to influence rock music unlike any other band, as do the Rolling Stones (although their status has been diminished somewhat by the band’s refusal to just GO AWAY and be quiet for a long while). The Who has its champions, and one cannot discount Led Zeppelin’s remaining legion of loyal fanatics. But Sabbath…bloody Sabbath…reviled by critics, adored by teenage miscreants across both in the U.K. and the U.S.A…Black Sabbath continues to grow in stature, casting an undeniable shadow over subsequent generations of headbangers and metalheads of every stripe, style and flavor.

Hardcore Sabbath fans can be excused for their unflagging allegiance and devotion to the original, Ozzie-led band line-up (circa 1969-1978). Of the band’s first five albums – from 1970’s self-titled Black Sabbath through 1973’s Sabbath Bloody Sabbath, and including the seminal Paranoid – well, only the aforementioned musical legends, and maybe Bob Dylan, can brag of such time-tested, tried-and-true initial efforts. There’s a reason that the youngsters keep rediscovering these discs, and it’s not just because “Ozzie rules,” man! From Osbourne’s haunting vocals and disturbed, madness-tinged lyrics and Tony Iommi’s incredible, inflammatory (and still unsurpassed) fretwork to the larger-than-life, molten-sludge rhythms of bassist Geezer Butler and drummer Bill Ward, these albums were ground-breaking in every way, providing a musical blueprint that other bands would later use to build their own sounds.

There was a second incarnation of Black Sabbath, however – sans Ozzie – that has also proven its mettle time and time again to become, if not as influential as the original line-up, at the very least, highly-regarded as an important era for the band. That era has been documented by The Dio Years. However, first I’ll have to provide a bit of history for the young ‘uns in the audience. When the struggle between Osbourne and his excesses proved to be too much for bandleader Iommi to tolerate, Ozzie was shown the door and the band performed gigs for a few months (1977-78) with former Savoy Brown vocalist David Walker. It never worked out, though, and by the time the band went into the studio to record Never Say Die (1978), Ozzie was back in the fold, singing on the album and subsequent tour.

The reunion proved to be short-lived, however, as the tensions between Osbourne and Iommi led to either Ozzie quitting the band, or being fired, depending on who’s telling the story. Former Rainbow vocalist Ronnie James Dio was recruited as Ozzie’s replacement sometime during early 1979, and it was with this new frontman that Sabbath recorded Heaven And Hell (1980), an album that many who ought to know consider to be among Sabbath’s best. With Dio’s sword-and-sorcery, fantasy-oriented lyrics providing a thematic change of direction, the band supported the singer’s soaring vocals with the heaviest dinosaur-stomp soundtrack they’d ever recorded. Produced by respected boardman Martin Birch (Deep Purple, Rainbow), the album was a commercial success on both sides of the pond, yielding classic slabs o’ metal like “Neon Knights,” “Lady Evil” and the title track, “Heaven And Hell,” all fondly remembered by ‘80s-era, second-generation fans of the band.

Going into the studio to record Mob Rules (1981), again produced by Birch, Sabbath lost force-of-nature-drummer Bill Ward, who resigned from the band to address several personal problems, including his own growing depression. Vinnie Appice, younger brother of legendary skinman Carmine (Vanilla Fudge, Cactus), was enlisted to try and fill Ward’s chair. Although it was every bit as heavy, the resulting album lacked the fresh revelations of its predecessor. Songs like the driving “Turn Up The Night,” featuring Dio’s best high-flying vocals and Iommi’s taut six-string leads, or the riff-happy “Voodoo,” find the band absorbing “New Wave Of British Heavy Metal” influences, sounding more like Iron Maiden than the Sabbath of yore. The Dio Years includes five songs from Heaven And Hell and four from Mob Rules.

For whatever reasons, Dio left Sabbath after the 1981/82 tour supporting Mob Rules, taking Appice with him to form his own self-named band. A live album was released from that tour, Live Evil (1983) providing fans with a mix of new material as well as Dio interpretations of vintage Sabbath like “Paranoid” and “War Pigs.” Sadly, The Dio Years only includes one song from Live Evil, the mesmerizing “Children Of The Sea.” After Dio’s departure, Sabbath soldiered on with a succession of vocalists, to varied success. Deep Purple’s Ian Gillan, Glenn Hughes, and Tony Martin all fronted the band at various times throughout the remainder of the ‘80s.

Fate being what it is, however, Dio rejoined the band in 1991, nearly a decade after leaving, to record and tour in support of Dehumanizer. By this point, Sabbath had been passed, commercially, by the previous decade’s nerf-metal bands, and artistically by a generation of thrash-and-black-and-Goth-metal bands that had been weaned on Dio-era Sabbath. The band desperately needed to reassert its domination in the metal world. Dehumanizer was the album that brought the band into the ‘90s and, strangely enough, subsequently set the stage for Ozzie to later perform with Sabbath again. Represented on The Dio Years by three songs – “After All (The Dead),” “TV Crimes” and “I” – Dehumanizer offered the heaviest Sabbath sound since Dio’s previous turn with the band. Iommi’s guitar screeches like a banshee across these tracks while Appice and Butler team up to redefine “doom-metal” with amazingly thick, bass-heavy rhythms.

Another fifteen years has passed, and Ronnie James has reunited with Tony and Geezer for yet another trip ‘round the world, dragging drummer Vinnie Appice behind him. The Dio Years includes three freshly-minted songs by the fab foursome, including the diabolical “The Devil Cried,” which features some of Iommi’s nastiest, most surgically-precise solos in years, and the ethereal “Shadow Of The Wind,” a riff-happy monster of a song that sounds as menacing as anything from the band’s earliest albums. The Dio-fronted line-up will tour under the name “Heaven And Hell” in support of The Dio Years, choosing not to go out on the road as Black Sabbath in respect of Ozzie’s (now permanent) place at the front of the band.

Whether you’re a fan of the original Ozzie-led Sabbath, a true-blue Dio devotee, or you sit somewhere in between, The Dio Years is a fine collection representing a typically overlooked era for this legendary band. Other than the three new “Heaven And Hell” tracks, there’s nothing else here that’s new – I, for one, would have liked to have seen the inclusion of one or two of the unreleased studio tracks that are known from the Dio era, or perhaps some rare live tracks from the vaults – but The Dio Years nevertheless stands tall as an essential document of this underrated period of Sabbath history, providing it the respect it has so richly deserved for over two-and-a-half decades. (Trademark of Quality blog, 2007)

Buy the CD from Amazon.com: Black Sabbath's The Dio Years
Posted by Rev. Keith A. Gordon at Saturday, June 11, 2016