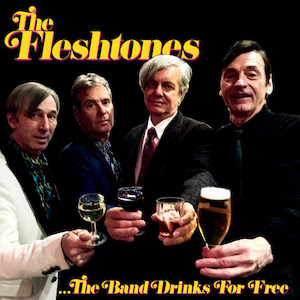 Our favorite gang of rock ‘n’ roll hooligans – the almighty Fleshtones – will be celebrating their 40th anniversary this year with the release of a new album, their 21st, and a supporting tour. Titled The Band Drinks For Free, the album was recorded at Florent Barbier’s CCP Sound Studio in Brooklyn and will be released on September 2nd, 2016 by Yep Roc Records.

The Band Drinks For Free features the long-time Fleshtones line-up of singer Peter Zaremba, guitarist Keith Streng, bassist Ken Fox, and drummer Bill Milhizer, the garage-rock legends kicking out the jams on a dozen new original songs that don’t stray far from the band’s trademark “super rock” sound (just check out the groovin’ “Love Like A Man” below).

The Fleshtones debuted in May 1976 at the infamous CBGBs club in NYC at the height of American’s punk-rock uprising. They were the first band to play at Irving Plaza and Danceteria in Manhattan and the legendary Maxwell’s in Hoboken, New Jersey. The band has inspired books (including Joe Bonomo’s 2007 book Sweat); movies (2009’s Pardon Us For Living But The Graveyard’s Full), and tribute albums (2007’s Vindicated).

The Fleshtones have inspired a legion of fellow travelers in bands like the Forty-Fives, the Dirt Bombs, the White Stripes, and the Godfathers, among many others. Give ‘em a listen and they just might inspire you!

Order the CD or LP from Yep Roc Records!