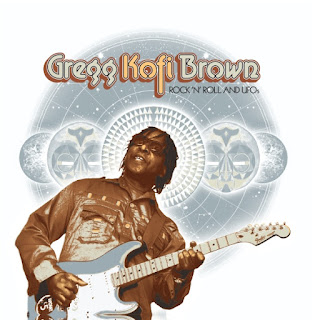 Ghanaian musician Gregg Kofi Brown spent nearly twenty years with pioneering world music outfit Osibisa before releasing his first solo album, Together As One, in 2005. Formed in London in 1969 by a group of African and Caribbean musicians, Osibisa fused the sounds of the various band members’ homelands with elements of R&B, rock, jazz, and funk to create an entirely new genre of music that found a small but loyal cult audience in both the U.K. and the U.S. as the band landed albums like 1971’s self-titled Osibisa and its follow-up, Woyaya, onto the Billboard magazine charts.

Gregg Kofi Brown joined Osibisa in the mid-80s and continues to make great music with the band, helping to expand its audience and influence worldwide while also recording solo music with friends like jazz legends Billy Cobham and Stanley Jordan, both of whom appeared on Together As One. On June 24th, 2016 Gonzo Multimedia U.K. will release Rock ‘n’ Roll and UFOs, a career-spanning anthology to accompany Brown’s upcoming autobiography of the same title. Including previously-unreleased songs, remixes, and demos the album features guest musicians like guitarists Dominic Miller (Sting) and Gus Isidore (Seal) and keyboardist John ‘Rabbit’ Bundrick (Free) as well as material from Osibisa and Brown’s solo efforts.

Brown’s autobiography, Rock ‘n’ Roll and UFOs, promises to be as much fun to read as the artist’s album will be to listen to. He certainly has some stories to tell, not only tales of globetrotting as part of Osibisa but also from his work as a studio bassist and producer with artists like Joe Cocker, Eric Burdon, Hanoi Rocks, and Bomb da Bass. Brown has also enjoyed a modicum of success as an actor, performing as Jellyroll Morton at London’s prestigious Royal Court Theatre as well as in the hit musical Tribute to the Blues Brothers. The book also promises to reveal the truth behind the title, documenting “three strange encounters” experienced by Brown in the California desert.

A fascinating and prolific artist, Gregg Kofi Brown has made an invaluable contribution to the popularity and evolution of world music.