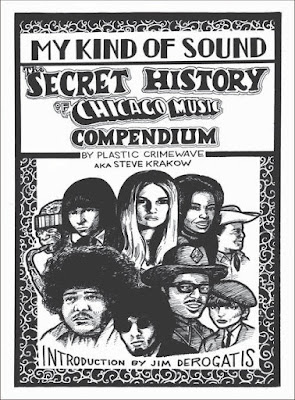 He may not be a household name, but writer, artist, and musician Steve Krakow (a/k/a Plastic Crimewave) is one of the most important and engaging music historians working in the field today. A self-taught expert on psychedelic rock and esoteric music, Krakow – under his ‘Plastic Crimewave’ nom de plume – launched his Galactic Zoo Dossier music zine in 1995. Published by the Chicago-based Drag City Records label, Galactic Zoo Dossier is a joyful celebration of the musical and pop culture flotsam and jetsam of the 1960s and ‘70s. Most notably, every issue of the zine (published roughly once a year to date) is hand-drawn by Krakow in his unique, psychedelic-tinged style.

Krakow’s bona fides extend beyond the publication of Galactic Zoo Dossier, although his eclectic tastes have led to interviews in those pages with such interesting talents as the Clive Palmer (Incredible String Band), Simeon (Silver Apples), Dave Lambert (Strawbs), Dick Taylor (The Pretty Things), and Arthur ‘Hellfire’ Brown (the zine takes its name from an album by Brown’s band Kingdom Come). As a musician, Krakow fronts Plastic Crimewave Sound, the avant-garde psychedelic outfit releasing half a dozen albums to date and, as a visionary, Krakow is promoter of the Million Tongues Festival in Chicago, exposing fringe and cult artists to a new audience.

Steve Krakow’s My Kind of Sound 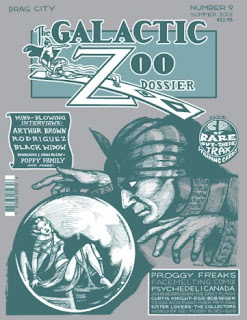 Most importantly for our purpose here, Krakow is the creator of The Secret History of Chicago Music. Krakow’s hand-lettered and hand-drawn column has been published by alternative newsweekly the Chicago Reader since 2005. An outgrowth of Galactic Zoo Dossier, the single-panel strip was meant to showcase “pivotal Chicago musicians that somehow have not gotten their just dues,” and it runs as a semi-monthly feature in the paper. Krakow also hosts a regular “Secret History” segment on WGN-AM radio, taking phone calls related to the featured artist, some of whom join the conversation. Now nearly 200 of Krakow’s “Secret History” columns – more than a decade of his work – have been collected by publisher Curbside Splendor in a gorgeous hardback book.

Ostensibly an odd-shaped (6.75” x 8.75”) art portfolio with matte B&W covers and thick, semi-glossy paper, My Kind of Sound: The Secret History of Chicago Music Compendium is an invaluable, groundbreaking work of original research and hell of a lot of fun to read and pore over. Krakow’s enthusiasm as a fan comes through in every artist profile he presents, and his familiarity with the bands and their music is complimented by personal interviews whenever Krakow is able to track the down an artist or band member. Every pen-and-ink panel features a sketch of the band or artist (some more effective than others, but all of them enchanting) along with an insightful, informative hand-lettered bio that captures the essence of the subject, providing a bit of back story, the reasons why we should care about them and, when possible, where the musicians are today – no little feat for any writer.


The scope of Krakow’s achievement with My Kind of Sound is remarkable by any standard, and the range of artists he covers is impressively diverse. From lesser-known Chicago bluesmen like Blind Arvella Gray, Fenton Robinson, and Mighty Joe Young to obscure rockers like Mason Proffit, the Ides of March, and Starcastle, Krakow gives ‘em all the deluxe treatment. Throughout the book, Krakow frequently covers more prominent artists like Bo Diddley, Rufus, and ‘Magic’ Sam Maghett, but he also gives a lot of love to true cult musicians like Skafish, Ken Nordine, Phil Upchurch, and the Illinois Speed Press, among many others.

It’s a heavy load to carry, but Krakow skillfully documents Chicago’s rich musical history in all its hues and facets, preserving it for the future. If you’re anything like the Reverend, Krakow’s My Kind of Sound will have you filling up your Amazon wish list and digging through vinyl listings on Discogs – and that’s the highest praise I can think of… Grade: A+ (Curbside Splendor, published January 5, 2016)

Buy the book from Amazon.com: Steve Krakow's My Kind of Sound: The Secret History of Chicago Music Compendium
Posted by Rev. Keith A. Gordon at Friday, June 03, 2016