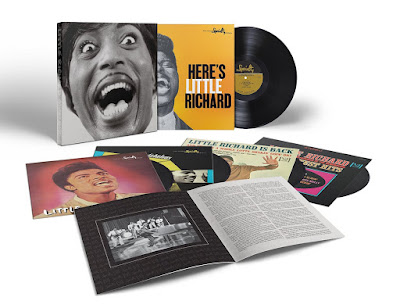 OK, I know that this blog has three or four loyal readers, so if any of you brothers and sisters are looking to buy the ol’ Reverend a birthday present in July, might I humbly suggest Little Richard’s Mono Box: The Complete Specialty and Vee-Jay Albums? Yeah, it’s a might pricey at the moment, but you can bet that some vendors will be offering a discount once the set has been officially released.

What am I talking about? On July 15th, 2016 Specialty Records – an imprint of Concord Bicycle Music – will release the aforementioned Mono Box: The Complete Specialty and Vee-Jay Albums, a deluxe five-album vinyl box set that includes the entire run of albums that early rock ‘n’ roll legend Little Richard recorded for both the Specialty and Vee-Jay Records labels circa 1957 to 1965, an exceptional and commercially blockbuster era for the influential rocker. Each vinyl album reproduction includes the original label and jacket art, with the music re-mastered from analog tapes and presented in their original mono mixes. The box also includes a sixteen-page booklet chock full o’ period photographs and lengthy liner notes by music journalist and historian Bill Dahl, a dude that definitely knows his stuff.

After a couple of false starts with RCA Records and Don Robey’s Peacock Records during the early 1950s, Georgia native “Little” Richard Penniman literally exploded on the fledgling rock ‘n’ roll scene after signing with Art Rupe’s Specialty Records label in 1955. A string of hit singles followed, beginning with “Tutti Frutti” and including “Good Golly Miss Molly,” “Long Tall Sally,” and “Lucille,” among others, raucous performances that would subsequently influence a generation of young rock ‘n’ roll fans on both sides of the Atlantic. Over the course of a career that has spanned seven decades, Little Richard has released nearly 80 singles and over 20 studio albums, been inducted into the Rock & Roll Hall of Fame and earned a Grammy® Lifetime Achievement award.

Penniman left rock ‘n’ roll after the release of the Little Richard album, pursuing the ministry and later recording several albums of gospel music. As such, 1959’s The Fabulous Little Richard was a sort of “odds ‘n’ sods” album pieced together by Specialty from previously unreleased sessions. It would be Little Richard’s final album for Specialty, notable mostly for songs like “Kansas City” and “While Lotta Shakin’ Going On.” After a hiatus of roughly five years, Little Richard returned to rock ‘n’ roll in 1964, signing with the independent Vee-Jay Records label after a successful European tour featuring the Beatles as one of his opening acts. Returning to the studio, Richard recorded a number of new tunes as well as re-recording several of his old hits with a band that included guitarist Jimi Hendrix and pianist Esquerita.

The fruits of these sessions were released by Vee-Jay as Little Richard Is Back in 1964 and His Greatest Hits in 1965, the latter album including re-imagined versions of songs like “Tutti-Frutti” and “Good Golly Miss Molly” featuring new arrangements and instrumentation. Sadly, Vee-Jay went into bankruptcy shortly after the release of His Greatest Hits and almost half the tracks recorded by Little Richard during these sessions went unreleased for years (even then, they were released on albums of dodgy provenance). Little Richard’s recording career lie fallow throughout the rest of the decade, the flamboyant and dynamic performer finding later success with albums and live performances during the 1970s.

It was with these five albums, released at the dawn of the rock ‘n’ roll era, that Little Richard wrote his legacy, and his influence on the evolution of pop and rock music cannot be overstated. Little Richard’s unique mix of gospel, blues, rock, and boogie-woogie piano-play fired up the dreams of bands like the Beatles, the Rolling Stones, and the Pretty Things and artists like Elton John, Michael Jackson and Prince. Mono Box: The Complete Specialty and Vee-Jay Albums documents where Little Richard’s legend began.