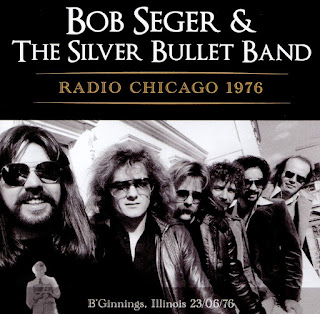 Like a lot of rock ‘n’ roll legends, Detroit’s Bob Seger toiled in obscurity for years before finding fame (and, presumably fortune). Seger scored his first regional hit with his band the Last Heard, the sales of their 1966 single “East Side Story” (on the local Hideout Records label) leading to a deal with the nationally-distributed Cameo-Parkway Records. Seger and the Last Heard released four more singles on Cameo-Parkway, the last of which – “Heavy Music” – was on its way to hit status when the label went kaput.

A couple years later, Seger signed with Capitol Records, changing the name of his band to the Bob Seger System, scoring a national hit with the classic “Ramblin’ Gamblin’ Man” (#17). The Bob Seger System recorded three albums for Capitol: 1969’s Ramblin’ Gamblin’ Man (which peaked at #62 on the charts) and Noah, and 1970’s Mongrel before deciding to go solo. A string of solid, albeit overlooked albums followed – Smokin’ O.P.’s (an incredible covers LP), Back In ’72, and Beautiful Loser, which captured much of the promise of Seger’s talents as a songwriter and performance but nonetheless went nowhere commercially at the time (it later sold double Platinum™ in the wake of Seger’s subsequent success).

Seger formed the Silver Bullet Band in 1974 with veteran Motor City rocker Drew Abbott on guitar, bassist Chris Campbell, keyboardist Robin Robbins, and drummer Charlie Martin. Adding saxophonist Alto Reed, this is the line-up that recorded Seger’s breakthrough album, 1976’s ‘Live Bullet’. Recorded in September 1975 at the legendary Cobo Hall in front of a hometown crowd, it’s considered to be one of the best live albums in the history of rock ‘n’ roll. The album showcased Seger’s dynamic showmanship and the band’s immense chemistry and electrifying performance skills.

‘Live Bullet’ would peak at #34 on the Billboard album chart on its way to five times Platinum™ sales status in the U.S. and double Platinum™ sales in Canada (where Seger had long enjoyed a loyal fan base). The artist followed up the live album’s success quickly, releasing the classic Night Moves album in October 1976, providing Seger with his first Top Ten album and single with the title track. In the six months that separated the two breakthrough recordings, Seger and the Silver Bullet Band earned an opening spot on the 1976 Kiss Destroyer tour, only to get kicked off the tour after six or eight shows.

More experienced, and more polished as musicians – and with the charismatic Seger on the microphone – the Silver Bullet Band outplayed Kiss every night, providing the Detroit rockers with invaluable exposure that helped fuel the success of both ‘Live Bullet’ and, later, Night Moves, launching Seger to stardom after almost a decade and a half in the trenches. But the imbalance in Seger’s popularity was evident before the Kiss tour. The singer played to a sold-out crowd of nearly 80,000 fans at the Pontiac Silverdome outside of Detroit one night in June 1976; the next night, Seger and the band performed for a few hundred people at the B’Ginnings club in the Chicago suburb of Schaumburg, Illinois.

Luckily, the B’Ginnings club show was broadcast live on WXRT-FM radio in Chicago, and will be released on July 8th, 2016 as Radio Chicago 1976 by All Access Records, distributed here in the states by our good friends at MVD Entertainment. The CD is said to feature a superb live FM recording from the B’Ginnings club, capturing Seger and the Silver Bullet Band before they broke through to the big time. Seger’s Radio Chicago 1976 features eleven songs, including fan favorites like “Ramblin’ Gamblin’ Man,” “Beautiful Loser,” and “Travelin’ Man” as well as obscurities like “Rosalie” and “Lucifer,” and even a scorching cover of Led Zeppelin’s “Whole Lotta Love” (full track list below).

Strangely enough, Seger’s live shows have never been bootlegged as prolifically as his friend and contemporary Bruce Springsteen (although they rocked just as hard), but this Chicago ’76 set had been released below-ground as the incorrecly-named Live In Montreal 1978. This proper CD release will bring an essential performance to fans in a better-sounding package. Seger and the Silver Bullet Band are said to have really burned the club down during their night in the Chicago area with a show that was as vital and exciting as what they’d performed in the Silverdome.

Superstardom followed as Seger and the Silver Bullet Band kicked out one hit LP after another – 1978’s Stranger In Town, 1980’s Against The Wind, 1982’s The Distance, and 1986’s Like A Rock – all multi-Platinum, Top Ten-charting blockbusters. Seger would subsequently be inducted into the Rock & Roll Hall of Fame in 2004 and the Songwriters Hall of Fame in 2012. For one night in Illinois, though, he was another hard-luck rocker looking to grab the brass ring that always seemed just out of reach, Seger and the band playing like they had nothing left to lose...